Daniel Stammler and Janosch Sadowksi came to Berlin by way of Karlsruhe, the city in southwest Germany where they founded Kolibri, their gaming startup. Stammler and Sadowski see the town as having been an ideal springboard for their business, especially thanks to its proximity to the Karlsruhe Institute for Technology (KIT) and all the creative minds studying there. “However, in order to take things to the next level, we had to move to Berlin,” says Sadowksi. “For one thing, a large part of the German games industry is at home in Berlin; and then after the move, it was much easier to fill our job vacancies with great international talent. Berlin has a completely unique pull on people.”

As has been the case for several other startups, Germany’s capital city provided Kolibri its stomping grounds. The company’s turnover is now roughly €100,000 per day, half of which is generated through advertising. “Our move to Berlin was one of the best decisions we ever made,” says Stammler.

Berlin is still a magnet for young companies and, above all, for young talent. This fact was proved once again in the latest Berlin Startup Monitor (BSM), an annual study published by the German Startups Association in cooperation with Google for Entrepreneurs. The findings of the study are based on the German Startup Monitor, which surveys 1,550 startups and their 3,763 founders and 18,000 employees.

The latest figures show that Berlin remains Germany’s startup hotspot. At 15.8 percent, Berlin is home to more than twice as many startups as Hamburg, the number two among startup cities in Germany, at 7.2 percent. Berlin also leads the nation in terms of the percentage of women employed at startups, although 16.2 percent is still far too low. The typical Berlin founder is male, in his mid-30s and holds a university degree in business or economics.

Although the formerly divided city of Berlin is often described as “unfinished,” it continues to attract people for a number of reasons, two of which are its sheer diversity and openness to newcomers. This is also reflected in the overall employee structure at startups. As the BSM notes, “A glance at the origins of employees at young companies in the capital shows that almost 50 percent are foreign-born, which makes Berlin considerably more internationally oriented than most other regions in Germany.”

Kolibri co-founders Stammler and Sadowski have no doubt that Berlin will continue its reign as Germany’s startup capital. The many networks and institutions created there to support founders and young companies will further consolidate this status, they argue. However, young founders throughout Germany – and in Berlin, too – are quick to complain about the complicated nature of local bureaucracy, in particular when it comes to hiring foreign workers. According to the BSM, for roughly two-thirds of all founders, acquiring visas is a particularly difficult challenge, and many lose whatever remaining patience they may have when confronted with all the social security conditions and provisions.

And yet, Berlin continues to draw large numbers of people. What does the city have that others don’t? “International flair and a big-city atmosphere on the one hand, and the familiarity of each distinct urban neighborhood on the other,” explains Stammler. He also notes that Berlin’s large pool of employees – particularly in the tech scene – makes the city “entirely unique on both a personal and an entrepreneurial level.” All of this in spite of the fact that Berlin weather is often gray and Berliners themselves quite gruff, says Sadowski, with a grin. What matters to him much more: “We’ve been able to triple the size of our team since we moved here.”

Yet another factor that should not be overlooked is the fact that there’s good beer to be had in Berlin. “We were astonished to discover that people in Berlin like to drink Rothaus, which is a beer from our home town. Rothaus will always have a special place in our fridge at Kolibri Games.” And it’s true – even when it comes to food, Berlin is better known for its international cuisine than for its local dishes.

“Berlin’s got a buzz,” says Jan-Niklas Schroers, associate director and team leader office agency at property consultant Savills in Berlin. Schroers backs up his claim by noting that the capital city has a pleasant business climate and a myriad of opportunities, plus the cost of living is not nearly as high as that seen in other European cities. He also explains that while the German capital is not yet a tech hub, it is most definitely a talent hub, a trend that fuels the city’s rapid ongoing development – in Berlin, a new company is founded every 20 minutes.

Berlin can already claim to be Germany’s strongest FinTech location. All the big players, including the online banks Solaris and N26, the company builder Finleap and the FinTech ventures Lendico and Fundingcircle, are based in Berlin. Even Rocket Internet, the company considered to be the pioneer among startup launchers, grew out of Berlin.

It is fascinating that even 30 years after the fall of the Wall, the German capital is still “unfinished” and “unorganized.” But it appears to be precisely this state of affairs that makes Berlin so interesting. “In general, I think it’s very good – even exciting – to be ‘unfinished’ as a city and economic space,” argues Schroers. “It opens up so many more opportunities for young and aspiring individuals than an established and less permeable structure would. Right now in Berlin, anything is possible.”

But these things alone will not be enough for Berlin to maintain its leading status in the long run amid competition from other international cities, notes Schroers. He argues that Berlin is going to have to expand its infrastructure, particularly by means of a major international airport – or even two international airports, if necessary (and if the local business community has its say). At the same time, however, Berlin will have to maintain that inimitable “unfinished” charm. As Schroers puts it: “Become a new Bay Area but still keep that Kreuzberg spirit. That’s the challenge in a nutshell.”

Magdalena Thiele
is a freelance economics journalist based in Berlin. 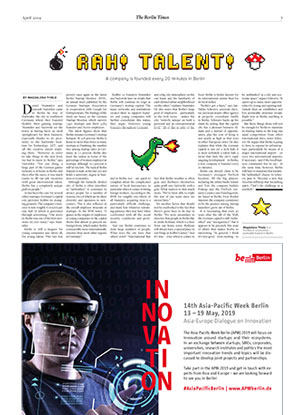