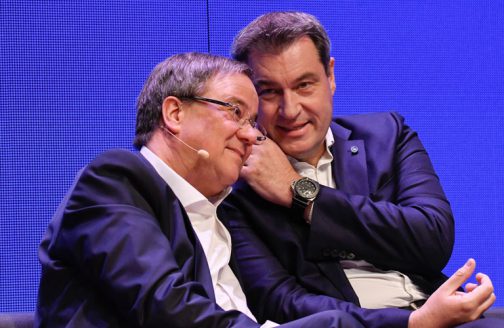 Her era will have to come to an end eventually. Angela Merkel has been German chancellor since 2005; you would have to look long and hard to find another politician holding a country’s top political position for so long, autocracies and banana republics excluded. But Merkel has unequivocally stated she will not run for office again in fall 2021, one year from now, in the Bundestag elections.

Her announcement in late 2018 and her subsequent resignation as chair of her party, the center-right Christian Democratic Union (CDU), during a time when her approval ratings were on a precipitous downturn, did not make her a proverbial lame duck; it brought her a confined yet unequivocal new lease on power. In fact, it gave Merkel room to operate free of the common ills that often face democratic politicians with an overly cautious eye on reelection. She no longer has to try to please every constituency. A physicist by training, Merkel’s rather uncharismatic, somber, almost scientific style of governing, allowing her to dissect a problem with surgical accuracy, has served her best. Big ideas, sweeping visions and grand oratory are not her cup of tea.

Merkel’s largely deft handling of the COVID-19 pandemic – both the death rate and the economic downturn have been limited compared to other states in the European Union and overseas – has boosted her party’s poll numbers to as high as 40 percent, a level not seen since 2013, when she won reelection in a landslide.

The biggest question in political circles these days is who will be tapped by her party to be its candidate for chancellor – and to have a very good chance of becoming Merkel’s successor in office.

The CDU has already begun its version of what the US calls the “invisible primary,” whereby candidates sort out their chances in backrooms (that is, when it was still permitted to meet face-to-face in enclosed spaces), garner support among important regional party officials, position themselves with sensible policy proposals and present themselves as either Merkel loyalists or purveyors of new ideas.

Annegret Kramp-Karrenbauer was the early front runner. The 58-year-old had been serving as minister president of the small southwestern state of Saarland until Merkel tapped her to become the CDU’s general secretary, an influential post often doubling as stepping-stone to higher office. When Merkel resigned from her party post one year later, AKK, as she is often called, narrowly won the intra-party contest, besting two candidates who explicitly wanted to change Merkel’s course, both symbolically and in terms of policy.

AKK won by adhering to Merkel’s legacy while carefully staking out her own political territory. And yet, due to sinking approval ratings, rhetorical missteps and regional electoral losses, a frustrated Kramp-Karrenbauer stepped down in February just before the pandemic claimed all headlines and attention.

The party’s poll numbers immediately went back up due to the German version of the “rally ’round the flag” effect that typically rewards the party in power in a time of crisis – that is, when the party is actually reacting to said crisis in an adequate and competent manner.

Even more than in previous years, the race for the party chairmanship is being considered a preliminary selection of the next chancellor. While it is common that the party chair secures his or her nomination for the general election, there is no automatic mechanism guaranteeing it – as recent events have shown.

Armin Laschet, minister president of Germany’s most populous state, North Rhine-Westphalia, Friedrich Merz, a long-time aspirant for the chancellery who’s been biding his time and harboring his grudges since being outmaneuvered by Merkel 20 years ago, and Norbert Röttgen, the eloquent foreign policy expert, more respected than admired, have all thrown their hats into the ring.

On March 1, Laschet would have been a better’s best choice; he had government experience, enjoyed broad appeal with his folksy and joyful demeanor and was the right man to cross every aisle.

But over the summer, his erratic and wavering handling of the pandemic – seen as too lenient, too eager to “reopen” – shone a different light on the leader. Fairly or not, he is now considered rather unsteady, indecisive and a bit of a panderer to the COVID-19-denying crowd.

Enter Markus Söder. The minister president of Bavaria, Germany’s second-biggest state, and head of the CDU’s sister-party, the Christian Social Union, has long been defined as the opposite of Laschet: too ambitious, calculating, combative.

In early 2018, Söder, for all intents and purposes, succeeded in forcing out his predecessor, Horst Seehofer. It was the culmination of a years-long bare-knuckles intramural struggle that eventually got him his self-proclaimed dream post.

Half a year later, Söder narrowly won reelection in Bavaria, not an outright rebuke of his claim to power, but a warning shot. Söder changed several of his right-leaning stances, got on better terms with Merkel, with whom he had often clashed, took on environmental and social issues, and refrained from dressing up in a colorful comic costume for Carnival, an old habit he now considered unbecoming for a statesman of his bearings.

When the virus struck in March, Söder pushed ahead in his new-found role. Restrictions were harsher in Bavaria; Söder was often the first to implement them, thereby forcing his colleagues’ hand in other states to follow his lead – and never forgetting to take vocal credit for all he had done. Söder quickly became the Andrew Cuomo to Laschet’s Ron DeSantis, the governors of New York and Florida whose pandemic policies were a study in contrast.

It did not take long for speculations to surface in Berlin as to whether Söder was priming for a joint nomination by the CDU and the CSU for the chancellorship in 2021.

Laschet could eke out a win in the race for the leadership of the Christian Democrats against Merz and Röttgen – with their once-promising runs now mere afterthoughts – and still not get the nomination at the party’s convention in December. Söder still has to declare his candidacy. Most likely he will delay his declaration for as long as possible while gauging his chances. As is befitting the era of the pandemic we are living through, all bets are off concerning the future.

The Social Democrats (SPD), the coalition partner of the CDU/CSU, has had its own turbulent leadership rumblings.

After its first female party chair, Andrea Nahles, resigned in anger over intra-party bickering in June 2019, the SPD held its first-ever election for the party’s top post in which all party members, not just several hundred delegates, were eligible; it was more akin to a US-style primary.

Candidates were encouraged to run on two-person tickets each comprising a woman and a man. In a surprise outcome in the final round, Saskia Esken and Norbert Walter-Borjans defeated Klara Geywitz and Olaf Scholz. Scholz, minister of finance and vice chancellor in Merkel’s cabinet, is seen as being uncharismatic yet experienced, competent and reliable – the quintessential establishment candidate.

Esken, on the other hand, was a left-leaning, largely unknown backbencher in the Bundestag. She had chosen as her running mate the 70-year old Walter-Borjans, who only barely had a bigger national profile. Their headline-grabbling selling point was the stated goal of ending the grand coalition with the Christian Democrats. The mood in the party had become more leftish in late 2019, and Esken’s and Walter-Borjan’s often young supporters were considerably more adept at turning out the vote, thus securing their victory.

However, a little more than half a year later, on Aug. 10, the party empire struck back. The SPD’s all-powerful steering committee, having already nixed a premature end to the coalition, was especially dissatisfied with Esken’s unorthodox and loose style, and in a truly topsy-turvy move nominated Scholz, the loser of the primary, to stand as the candidate for chancellor next fall. Esken and Walter-Borjans had to publicly approve what has to be considered an all-out repudiation of their political viability.

Current polling suggests that the Social Democrats will receive 16 percent of the vote. Scholz would have to beat out the Greens, currently polling one to two points ahead, for second place and then hope to form a coalition with them and the Left Party. It is a narrow path to victory.

The CDU and CSU, currently at 37 percent, will most likely court the Greens to form an unprecedented partnership.

The eco-friendly Greens have moved closer to the center, positioning the party as the sensible choice for traditional bleeding-heart liberals and the affluent cosmopolitan latte-drinking progressives. The leadership duo of Annalena Baerbock and Robert Habeck project just enough surface charisma to brush over the unresolved policy conflicts that come with being open for both a center-right and a center-left coalition. The Greens are in an enviable position, as both the Union and the SPD desperately want to end the grand coalition that has governed Germany for 13 of the past 17 years. And after nearly joining the government in 2013 and 2017, they won’t pass up the chance this time.

And yet, the establishment forces in both big-tent parties know they must steel themselves for the possibility that a continuation of their grand coalition may prove the best move forward at this time next year. Merkel’s patented moderating style just might come in handy for her successor. 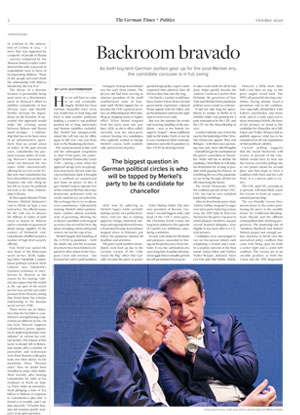