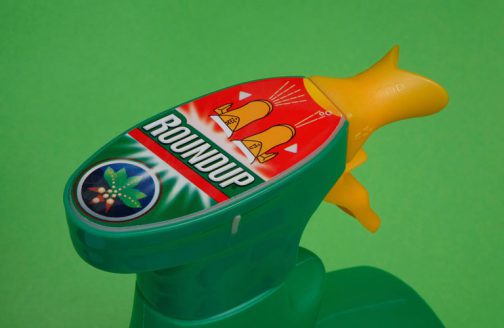 The chief executive of the pharmaceutical and chemical giant Bayer is preparing for a tumultuous meeting with his shareholders. They will convey their displeasure about the company’s massive loss in value to Werner Baumann at the corporation’s general meeting on April 26. Their anger is understandable. While before the acquisition of Monsanto, a share of Bayer was worth €105, it currently sells for around €60. For a short time, the market capitalization plummeted below the €63 billion Bayer had paid in 2018 to acquire the controversial US-based seed producer. Within three months, Bayer became “the biggest and fastest destroyer of value in the history of the DAX,” as shareholder Christian Strenger ranted in a motion to the general meeting.

Baumann views this very differently. The stock exchange tends to exaggerate trends, he claims, downplaying the crash. He maintains the acquisition was still a good idea.

This disaster is in no small part due to the 11,200 pending lawsuits filed by US citizens against Monsanto. At issue is the question of whether the herbicide glyphosate can cause cancer in humans. The courts have issued two groundbreaking rulings thus far. In each case the plaintiff won. The first was in August 2018, when a jury awarded the plaintiff a payment of $289 million. A higher court then reduced the penalty to $78 million. In a test case in March of this year, a jury in San Francisco ordered Bayer to pay approximately $80 million to a Monsanto customer who had developed cancer. The projected maximal financial risk stemming from the wave of lawsuits is a staggering $800 billion. The worst-case scenario is nothing less than the permanent demise of the long-standing company.

While small shareholders are groaning and calling the acquisition of Monsanto a flop, the management is standing by its decision. Critical shareholders were told that “the executive and supervisory boards are convinced that the acquisition of Monsanto was the right choice.” In doing so, Bayer has presumably become the world’s leading agricultural company.

The executive board sees no reasons for stepping down. Indeed, Bayer will fight these verdicts using all legal means at its disposal and is certain that the herbicide glyphosate in its weed-killer Roundup, which is at the center of this legal morass, does not cause cancer. “The verdict in this case has no influence on future cases,” Bayer assured the public in a press release.

Bayer continues to refer to more than 800 studies submitted in connection with the marketing authorization of Roundup in the US and Europe. These claim that the Bayer products in question are safe when used properly. Current studies have also concluded that there is no cancer risk for humans. But it’s not quite as simple as that. The World Health Organization’s International Agency for Research on Cancer (IARC) has found that glyphosate is “probably carcinogenic.”

Bayer shareholders fear that the executive board has not sufficiently addressed the hidden risks of Monsanto products. “Bayer looked only at the numbers during the acquisition,” claims the Coalition against BAYER Dangers (CBG), which counts among its activists shareholders critical of the corporation. “Glyphosate represents not only billions in sales, but also cancer, genetic engineering and a danger to biodiversity.”

Critics of Bayer management will not prevail in their demand to discharge the executive board at the general meeting on April 26. The supervisory board stands firmly behind CEO Baumann. The executive board has attended to its legal obligations, said Supervisory Board Chairman Werner Wenning to the business journal Handelsblatt. “Once more we have expressly approved this strategy.”

Nevertheless, the dual messaging inherent to the acquisition of Monsanto remains a “big problem,” according to the Munich-based branding expert Alexander Biesalski. While the pharmaceuticals manufacturer would like to be known for its promotion of human health, Monsanto’s herbicide may actually be making humans sick. “This contradiction alone creates distrust,” observes Biesalski.

Biesalski doubts that the pharmaceuticals giant will win back stakeholders’ trust by making lots of noise: “Bayer should operate much more delicately in public.”

This is not the only problem facing the Leverkusen corporation. On paper, Bayer is still a behemoth. Revenues in 2018 reached nearly €40 billion, a rise of 13.1 percent over the previous year. But earnings before interest and taxes (EBIT) declined by a third to roughly €3.9 billion, mainly because of write-downs to assets.

The jump in revenue is thanks to the crop science division, which grew by almost a half to around €14 billion thanks to Monsanto. Other divisions look worse. Revenue from pharmaceuticals declined slightly, while the consumer health and animal health divisions suffered more significant losses. Still, the executive board is sticking to its goals, which foresee strong growth in years to come in terms of both revenue and profit.

This worries Bayer’s work force as well. With 117,000 employees at the end of 2018, the drug company is one of the largest employers in Germany. 12,000 are slated to be let go. And of all the locations to be shuttered, the company will close up shop in the very town where its two young founders mixed their first chemicals in 1863.

The company’s history began when Johann Friedrich Weskott and Friedrich Bayer started producing dyestuffs in the industrial town of Barmen, which is now part of Wuppertal. In 1888, they added the development of pharmaceuticals to their portfolio. What has probably been the company’s most famous drug is still appreciated today: aspirin. This brand’s first analgesic tablet hit the market in 1899 as the company grew in leaps and bounds. But Bayer’s history also has its dark sides, such as the invention of heroin and the fusion of German chemicals giants to form IG Farben, the manufacturer of the poison gas used in concentration camps.

Whether or not the whole company now goes dark will depend on the outcome of the wave of lawsuits blanketing the US. Some analysts are already predicting a takeover and breakup if the loss in value persists.

Wolfgang Mulke
is a freelance journalist based in Berlin. 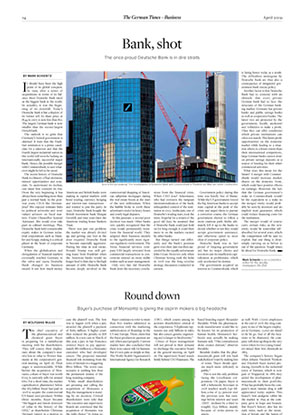