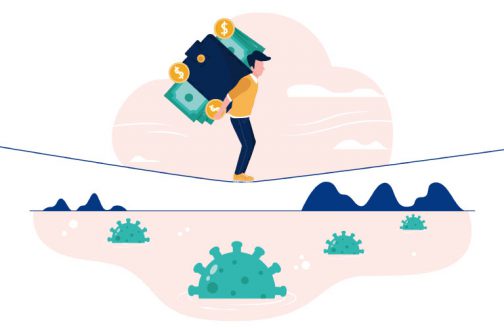 Rarely do the results of political choices become so visible so fast. After COVID-19 turned from a China-centered tragedy into a global threat some six months ago, all advanced economies faced a similar set of challenges. But they reacted differently. Countries such as the US and the UK, whose overconfident leaders put too much trust in their own political instincts, paid a heavy price for their choices. Conversely, countries like Denmark, Germany and South Korea, which were ready to learn fast from others’ experiences and act upon scientific advice, fared less poorly.

A comparison between the US, the UK and the eurozone brings out the differences. Fate was not initially kind to the eurozone. Italy, Spain and France, in late February, were the first countries in the advanced world to be hit badly by the virus. But once they realized the scale of the problem, they – and virtually all their neighbors within the eurozone – reacted swiftly and decisively. They severely restricted the freedom of their citizens to move about and shut down major parts of their economies from mid-March onwards. As a result, the first wave of the pandemic began to subside a few weeks later. Once infection numbers had fallen significantly, eurozone member countries gradually eased their restrictions from late April or early May onwards, allowing their economies to recover.

Having just left the European Union on Jan. 31, the UK tried to do it differently. For eight crucial days in mid-March, the government hesitated to follow the continental example. This allowed the virus to spread exponentially in the UK for longer. Because of a rate of infections and excess deaths from COVID-19 that was much higher than in the eurozone, and in Germany in particular, the UK then had to maintain its harsh lockdown for considerably longer. As the chart shows, consumer activity as measured by how often people visit shops and recreational facilities recovered much more slowly in the UK. As a result, the UK economy contracted by 22.5 percent in the first half of 2020. Although the virus had hit major parts of the eurozone first, it got away more lightly with a 14.8 percent drop in GDP.

Unfortunately, the US failed to learn the lessons from Europe. Apart from the Greater New York region and a few other states, the Trump administration reacted late, more hesitantly and often more erratically. For the most part, lockdowns in the US were less strict than in Europe and consumers were more reluctant to accept wearing masks and social distancing. At first, this seemed to grant the US an economic advantage. Its GDP fell by a mere cumulative 10.5 percent in the first half of 2020. But as the virus continued to make its way through the US, economic activity rebounded more slowly than in the eurozone in mid-2020 (see chart). Tens of millions lost their jobs; over 6.8 million COVID-19 cases caused more than 200,000 deaths.

One country within the EU tried to strike a different balance between risks to its citizens’ lives and risks to their livelihoods. Acting upon local scientific advice, Sweden kept schools, restaurants and some other parts of the service economy open, even during the worst phase of the pandemic, while they were shut almost elsewhere else in Europe. Evidence to date suggests that the Swedish experiment has largely failed. Infection and death rates in Sweden are much higher than in Denmark and Finland, two neighboring countries that had imposed much more stringent lockdowns. Nonetheless, the Swedish economy contracted by 8.2 percent in the first half of 2020, roughly in line with the loss in GDP suffered by Denmark (9.2 percent) and Finland (6.3 percent). Sweden has now largely ditched its special approach in favor of policies more similar to those pursued elsewhere in Europe.

Germany’s response to the crisis has been far from perfect. On all relevant counts ranging from the loss of human lives to the depth of economic recession, Japan has been more successful. Nonetheless, Germany has so far mastered the challenge better than other major economies on either side of the Atlantic. Most importantly, as of mid-September its rate of COVID-19-related death of 115 per one million inhabitants remains far below those in the US (601), the UK (613), France (474) and Italy (589).

To some extent, Germany was lucky. Many of those who brought the virus into the country were healthy adults returning from skiing holidays in northern Italy or Austria. As the virus thus began to spread in Germany with fewer serious medical complications than in the hotspots of northern Italy, eastern France and Spain, the Federal Republic had precious extra time to protect its most vulnerable.

But in the way that fortune often favors the well-prepared, three special traits of the German economic and political system played a major role in its comparatively successful fight against the virus and the ensuing recession, which in Germany, with a GDP decline of 11.9 percent in the first half of 2020, was less pronounced than in the eurozone as a whole.

First, Germany’s political system, with its 16 powerful states and the lack of one domineering metropolis, is less centralized than that of most other countries. The need for constant dialogue between different layers of government helped keep the discourse half-rational. Germany’s system strikes a balance between dispute and consensus as well as one between compulsory rules for the entire country and the freedom for each of the 16 states to react to circumstances flexibly. The states can learn from one another while the federal government and public opinion can exert pressure on the states to adopt the measures that seem to work elsewhere. To a certain degree, the competition between the two most prominent state governors – North Rhine-Westphalia’s Armin Laschet and Bavaria’s Markus Söder – for the pole position to succeed Angela Merkel as German chancellor in the September 2021 election has heightened their resolve to get the COVID-19 response right and, if need be, learn fast from successes and failures elsewhere.

In France and the UK, the desire of the center to control it all complicated and delayed the initial response. For example, if regional authorities in eastern France had been able to react swiftly without having to wait for instructions from Paris, they could have contained the country’s first serious regional outbreak in Mulhouse Alsace earlier and with less damage.

In contrast to the US-style deadlock between two houses of parliament, Germany is blessed with a tradition of seeking a cross-party consensus on key issues of national interest. In addition, the calm leadership of Merkel, a scientist by training, compares rather favorably to the more erratic behavior of President Donald Trump in the US and Prime Minister Boris Johnson in the UK.

Second, Germany has more experience than most other advanced countries in dealing with economic shocks. Specializing in the export of highly cyclical goods such as cars and machine tools, Germany is usually more affected by the ups and downs of the global business cycle than other economies. Over the decades, frequent bouts of strong exchange rates, which temporarily undermined the competitive position of Germany’s export industries, have added to the shocks. In response, Germany has developed and honed tools to shield its workers and consumers as much as possible from such gyrations. As a result, Germany’s labor market as well as the income and spending of its consumers are usually more stable over the business cycle than in other countries, even when German GDP fluctuates widely.

The best-known of these tools is Kurzarbeitergeld, a scheme that subsidizes temporary periods of underemployment on the job. This measure allows workers whose employers can offer them no or only limited work to worry less about losing their jobs. The system helped Germany to weather the financial crisis of 2008–2009 remarkably well, with only minor losses in employment and no significant decline in private consumption.

In response to the lockdowns, other countries have now rushed to adopt similar systems. By and large, they have served their purpose. But these systems often worked less smoothly than in Germany, where companies and labor offices have learned from decades of experience how to calibrate and administer them.

Third, having deliberately saved for a rainy day with small fiscal surpluses during recent boom years, Germany could afford to open the fiscal taps fast and generously when the hailstorm of the pandemic set in. This helped Germany to cushion the shock better than most other economies in Europe. In addition, Germany’s strong fiscal position enabled it to back the idea of a big €750 billion EU recovery program, which will support the fiscal responses to the pandemic in the more afflicted countries of Europe over the next four years.

The final verdict on the relative performance of countries is still outstanding. Following a renewed surge in infections in the US in June and July, most European countries are now experiencing a renewed rise in cases as well. Increased travel activity over the summer holiday season, a desire to party again and generally less cautious behavior are all contributing factors. However, with the exception of Spain, infection rates in Europe remain well below those the US. And once again, Germany seems to be less affected than most other advanced economies.

Fortunately, the rates of increase in medical complications and deaths remain far smaller than they were in March and April on both sides of the Atlantic. Societies have learned how to protect the vulnerable and treat the infected. Targeted and regional restrictions will be needed and potential super-spreader events such as big boozy parties and mass entertainment events will likely have to be curtailed for many months to come. However, it seems unlikely that new harsh and nationwide lockdowns will be required. Unless countries respond poorly to the current rise in infections, the recovery from the unprecedented plunge in economic activity in March and April will most likely continue, even if the pace of the rebound looks set to flatten somewhat this autumn.

Holger Schmieding
is chief economist at Berenberg, a private bank. He writes frequently for German business newspapers such as Capital and Handelsblatt. 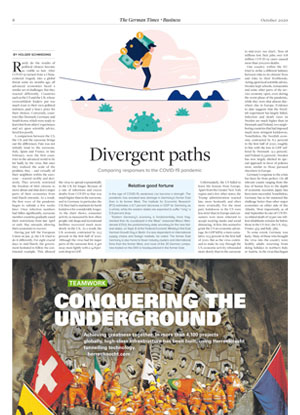