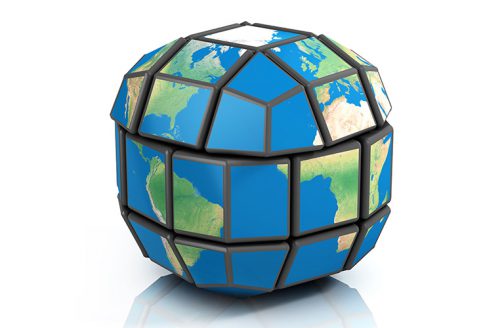 We are facing “the greatest challenge in the history of Europe.” When Angela Merkel uttered these words in the Bundestag only a few days before Germany assumed the presidency of the EU Council, the chancellor was not referring to the climate crisis. Nor was she talking about the massive and ever-increasing destruction of the environment or the ongoing extinction of countless species of plants, fish and insects. Merkel was speaking, of course, about the COVID-19 pandemic.

In the past several weeks, the pandemic appears to have eclipsed the significance of all other political problems, no matter how pressing they may be. Yet, anyone who thinks that environmental protection will have to be put on the backburner – as has happened so often in the past – may actually be wrong this time. In the coming six months, it’s quite possible that the exact opposite will happen, for a number of different reasons. If all goes well, under the German presidency of the Council, the EU may just be able to achieve more for the protection of the environment and especially of the climate than in any previous year.

The EU Council presidency does not usually involve any significant degree of power in terms of shaping policy and launching initiatives. The basic task of the government holding the temporary presidency is to run the business for six months and – when faced with any controversial issues – find fruitful compromises together with the heads of the other member states, the EU Commission and EU Parliament. In order to achieve this delicate balance, the government holding the presidency must often pigeonhole its own ambitious goals.

The fact that things might be different this time – that is, that Germany’s EU Council presidency could become something truly special and actually achieve a great deal in the realm of environmental protection, of all things – is due to a series of both fortunate and unfortunate coincidences.

The first coincidence is that the economic crisis into which all European member states have slipped as a result of the pandemic is exceptionally deep. Some regions are even on the verge of collapse. If the EU wants to get back on track as quickly as possible, it will have to engage in more than just routine administration during the coming months. It is going to need big programs, big ideas and big money.

The second coincidence is that Ursula von der Leyen, the German Christian Democrat who heads the European Commission, has made one thing clear from the very beginning: She wants to use the EU to prove that environmental protection and economic prosperity are not mutually exclusive and that industrial nations can indeed be restructured to become carbon neutral. In fact, at the very start of her presidency, she announced that one of her priorities would be the European Green Deal, which comprises an extensive spending program and ambitious climate legislation.

The third coincidence is that the head of government now at the helm of the EU Council is Angela Merkel, a politician who began her international career 25 years ago as Germany’s environment minister at the very first climate conference in Berlin. Since then, Merkel has been among those international leaders who have repeatedly and decisively worked to promote a global climate policy. As her chancellorship is set to end in 2021, Germany’s EU Council presidency will be her final opportunity to forge something big and lasting on the international stage. Her reputation as the “climate chancellor,” and thus a great deal of her legacy, will depend on her accomplishments and achievements in the coming months.

Both Merkel and von der Leyen are aware that most of the programs created to offset the economic effects of the pandemic will only make sense if they also serve to combat climate change. If funds were used only to prop up the old and polluting economic structure, the state of emergency caused by COVID-19 would be immediately followed by a climate catastrophe.

Merkel has thus referred to her EU job as a “double task,” which is to say that “the responses to the economic and social consequences of the pandemic” cannot include “a return to traditional ways of working and conducting business.” The current COVID-19 aid programs encompass the double aim of saving the EU economy and simultaneously transforming it into a green economy. This requires giving the EU an eco-innovation boost.

There is certainly reason to be skeptical. In the past, a number of grand declarations and visions of environmental revitalization issued by new EU Council presidencies quickly withered and wilted, simply because they failed to find majority support for their lofty plans.

The result has been a mixed bag. The EU has reduced its greenhouse gas emissions by 23 percent since 1990, putting it far ahead of the pack of Western industrialized countries. Even the goals promised by the EU in the context of the Paris Climate Agreement are comparatively good: By 2030, the EU will reduce its CO2 emissions by at least 40 percent as compared to 1990. Given the pace at which the climate is changing, this is far too slow. If the EU wants to show that it is taking the climate threat (and its own promises) seriously, it must show more ambition.

Merkel still has this ambition. At the height of Europe’s experience of the pandemic in late April, she announced that EU climate targets would need to be ratcheted up. She now envisions a reduction of 50 to 55 percent rather than 40 percent. In addition, a climate law is set to make the goal of climate neutrality by 2050 a binding commitment. For environmental activists, this is still far too little; they are calling for at least a 65 percent reduction. But even Merkel’s lower target would have a very quick and tangible impact. It might result in CO2 certificates becoming more expensive, which would make CO2-intensive practices less lucrative.

There would also have to be stricter requirements for diesel and gas engines. Furthermore, member states would have to provide stronger support for housing and energy efficiency in general. And they would have to start generating a significantly larger degree of electricity from renewable energies, such as wind, hydro and solar.

Stricter climate protection would have very real consequences outside of the EU, as well, with many international climate negotiators predicting that bold European policy decisions relating to the environment would send a clear signal to other countries. China, for example, might then ramp up its own efforts to become green.

Still, ambitious goals are only a small part of climate policy. The Merkel-von der Leyen duo is also pushing for the implementation of the Green Deal. This involves more support from Brussels for the restructuring of the EU economy along environmentally friendly lines and the assessment of all programs and projects in terms of their climate impact.

Much of the deal is controversial, however, and a number of details remain absent, in particular the approval of the vital spending programs by other EU member governments. This green light will not be easy to achieve. It remains unclear who will contribute what amount to the EU budget in the future and how large that budget should be in the coming years.

The Multiannual Financial Framework (MFR) for 2021–2027 will have to be renegotiated, and this will be difficult due to the departure of the UK, which had contributed a considerable amount of money to the framework.

It is also still unclear how much money will flow into the reconstruction fund proposed by the European Commission. According to a suggestion made by France and Germany, the EU would take €500 billion in hand and pass it on to the hardest-hit member states. For its own part, the Commission has requested financial aid to the tune of €750 billion.

Yet another controversial issue revolves around the precise conditions that determine exactly how money will flow from Brussels to those countries most affected by the COVID-19 crisis. If decision-makers insist that ecological criteria and environmental protection play a greater role in determining this flow, it will not make things any easier.

Not everyone shares the idea that funding for economic growth should automatically go hand in hand with funding for climate protection. For example, the German chancellor is having a difficult time at the moment, even among her own supporters in the European People’s Party (EPP); these Christian Democrats in the European Parliament don’t think much of the Green Deal and are eager to make all programs contingent upon positive developments in the economy.

“We have to stabilize industry first before we can lead it towards a climate-neutral future,” says EPP parliamentary leader Manfred Weber. He argues that the priority should be to first assess the state of the European economy and determine how many of the new climate regulations it could sustain: “Only then will we be able to think about a new set of rules regarding climate protection.” Weber would like to postpone environmental protection to some point in the future. He knows that he has the support of many Eastern Europeans as well as allies in Southern Europe, where the idea of linking funds from EU programs to strict conditions is also unpopular.

In announcing her plan for Germany’s EU Council presidency, Chancellor Merkel said: “With each summit, each negotiation, each conflict, each debate, [Europe] has also gained substance and […] mutual understanding. All this was in truth not always easy. There were some bitter conflicts.” But they were overcome. Merkel hopes that this will once again be the case.

Petra Pinzler
is a Berlin-based correspondent for the weekly newspaper Die Zeit, with a focus on politics and economics. 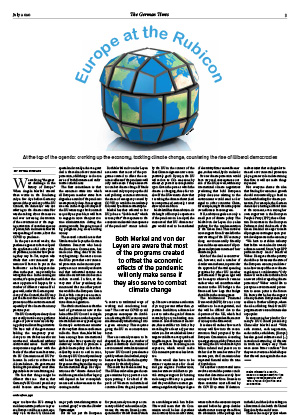