In the beginning, there was a promise: “Through our joint efforts,” said Chancellor Helmut Kohl in summer 1990, “we will soon succeed in transforming the former states of the GDR into blooming landscapes where it is worthwhile to live and work.”

The GDR’s Ministry of Economics was also cautiously optimistic at the time; according to its own assessment, 40 percent of all East German enterprises would be capable of generating a profit. Unfortunately, this number turned out to be vastly exaggerated. Reunification was followed by countless bankruptcies, with millions of easterners losing their jobs. Instead of “blooming landscapes,” the result was “beleuchtete Wiesen” – illuminated meadows, as the East Germans called commercial areas developed in the hope that investors would snap them up, but which remained empty and deserted. Hundreds of billions of euros have been pumped into the East since reunification, yet the gap with the West remains. And it’s not getting any smaller.

Of course, Germany is not the only country with regional differences. In Italy, for example, the wealthy north stands in contrast to the poor south. In the UK, it’s the other way around, with the wealth concentrated mainly in the south. All industrial nations have isolated areas that fall short, and usually people get used to the differences. In Germany, however, even 30 years after the fall of the Wall, the East-West divide remains a troublesome political issue. And let’s not forget: According to Germany’s constitution, the government is obliged to create “equal living conditions” throughout the country.

Despite all efforts to do so, that goal has not been achieved. According to the German Institute for Economic Research (DIW), between 2015 and 2017, individuals working full-time in the western states earned a gross average of €3,070/month, whereas in the East they earned only €2,320/month. Workers in the West earned an average of €17.40/hour, but only €13.10/hour in the East. The risk of poverty is also greater in the East: while roughly one-fifth of all employed individuals in the West work for minimum wages, that number is almost 40 percent in the East.

The disparity between eastern and western Germany becomes even more evident when looking at individual administrative districts: On average, a private household in Germany is able to spend €23,300 on goods and services. According to the union-affiliated Institute of Economic and Social Research (WSI), that number rises to almost €35,000 in Germany’s richest district, Starnberg, near Munich. In contrast, households in eastern German cities, such as Halle and Frankfurt an der Oder, have less than half that amount available to them. “Income levels there are thus compatible with those in Italy,” note the WSI economists. People who earn less are also less able to accumulate wealth, so it’s no surprise that an adult in the West has an average net wealth of €120,000, which is more than twice the eastern German average of €55,000.

What are the drivers of these persistent differences? One root cause can be found in the weak contextual factors shaping the former East Germany’s transition 30 years ago. Plopped down into the unknown realm of market-economy competition, most of the GDR’s socialist businesses were simply overwhelmed by the task of making a profit in terms of hard currency rather than producing concrete, jeans and chemicals simply to meet a quota. In addition to outdated production facilities, they also contended with rapidly growing wages and an exchange rate of 1:1 between eastern and western marks, which meant a currency appreciation equivalent to 700 percent.

After reunification, less than 10 percent of companies operated at a profit. Most of the “new companies were not up to the standards of the Western market,” explains the DIW.

These problems were compounded by weak overall economic development in the first few years of the new millennium, which drove the unemployment rate to 11 percent in the West and above 20 percent in the East.

Since that time, there has been a relatively steady upward trend in both East and West. And yet, still today, productivity at companies in the East is lower than in the West. Measured in terms of economic output per employed individual, eastern Germans still achieve only 82 percent of the level achieved in the West. The Halle Institute for Economic Research (IWH) recently observed that “no eastern state even comes close to Saarland, the state with the lowest productivity in western Germany.”

One reason for this is the fragmented nature of the eastern German economy. Companies in the West are generally larger – and larger companies are usually more productive. In the East, roughly 8 percent of employed people work in companies with more than 250 employees; in the West, that share is 23 percent.

“What the ‘new’ German states lack are large companies that have strategic business functions, primarily in research and development,” argues the IWH. There are hardly any corporate headquarters in the East. In 2016, only 36 of the top 500 German companies had headquarters in the former GDR.

Interestingly, there is still a part of the East-West divide that remains a mystery, even to economic experts. Joachim Ragnitz from the Ifo Institute for Economic Research argues that earnings in the East might never quite catch up to those in the West. “The idea of creating an economic balance between East and West at any price is neither a sensible goal nor can it realistically be achieved using the usual economic policy instruments,” Ragnitz claims. “Eastern Germany is not a laggard western Germany; it has fundamentally different problems.”

The DIW’s Peter Krause sees a much more serious political and social problem elsewhere: in the realm of social inequality. According to Krause, the key issue is not between East and West, but between rich and poor. “There is no doubt that tremendous progress has been made in terms of harmonizing the two sides’ standards of living since reunification,” says Krause. He notes, however, that in the past 30 years, income inequality and the risk of poverty have also risen in both parts of the country.

Stephan Kaufmann
is a business journalist and author based in Berlin 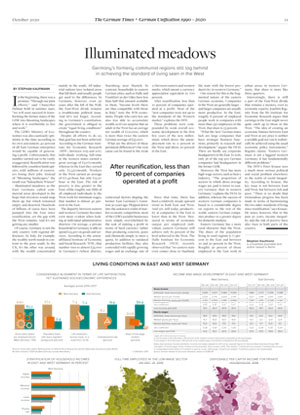