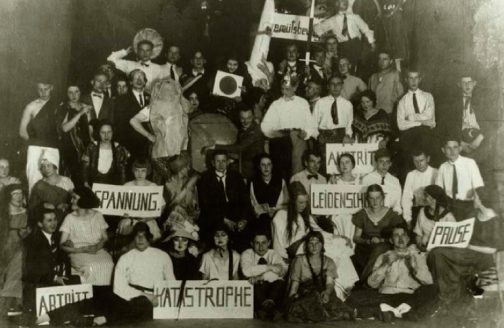 The townspeople of Weimar had never come across the likes of a Johannes Itten. The bald instructor at the Staatliches Bauhaus, or simply Bauhaus, often wore a monk’s habit of the Mazdaznan movement while exuding esoteric worldviews from literally his every pore – his philosophy included strict vegetarianism and, by all accounts, bounteous amounts of garlic. His unusual teaching methods quickly made the rounds in this once serene former ducal residence – they included breathing exercises, relaxation sessions and gymnastics as well as periodic bowel cleansing. His entire bearing seemed to convey a disdain for convention.

When the Bauhaus was founded in Weimar in April 1919, the end of World War I and the abdication of the last Grand Duke of Saxe-Weimar-Eisenach, Wilhelm Ernst were but a few months past. On paper, the Staatliches Bauhaus, under the direction of Walter Gropius, combined the former Grand Ducal School of Arts and Crafts with the Weimar Saxon Grand Ducal Art School, which had been founded by the Belgian designer, Henry van de Velde.

It quickly became clear that the new academy would embody an entirely new spirit. In the Bauhaus Manifesto, Gropius made an emphatic call to reunite art and craftsmanship and together create “the new building of the future,” which will “unite every discipline, architecture and sculpture and painting, and which will one day rise heavenwards from the million hands of craftsmen as a clear symbol of a new belief to come.”

While by today’s standards that may sound like excessive pathos, back then such appeals were delivered very much in earnest. They embody the optimistic spirit of a young generation that – after the convulsions of the war and the end of the ruling nobility – strove to lead a different, a freer, a boisterous life. And so it all began: the 150 young women and men who had registered in roughly equal numbers for that first semester celebrated spectacularly, moved informally about the town and even sometimes bathed naked in the River Ilm.

This appalled the stuffy Weimar townspeople, who still clung to the etiquette of the empire. Children from these circles – it has often been reported – were thus sternly chided for misconduct: “If you don’t behave, it’s off to the Bauhaus for you!” A worse threat was evidently unthinkable.

“This contrast between a populace still predominantly stuck in an older time and the wild, wacky Bauhaus community hungry for life is a reflection of the questions surrounding the design of the future, questions that in many respects remained fully unresolved in the young Weimar Republic,” says Steffen de Rudder, a professor at the Bauhaus University in Weimar, whose work deals extensively with the history of the Bauhaus. Many currents of the age, from naturism to nudism, from progressive education to psychoanalysis, found expression in the Bauhaus curricula. A preliminary course conceived chiefly by Johannes Itten was developed to constitute an elemental component of the training. Itten was intent on testing the individual aptitudes of each student and conveying to him or her the appropriate fundamentals of artisanal craftsmanship and design.

“More than anything, it was about showing the students a very specific approach: perceiving assigned tasks in light of the means of the time,” explains de Rudder. To fathom the nature of the materials and their usability for a particular task – this would become the essence of Bauhaus thought.

The courses in the individual workshops built on this idea. In the early years, Walter Gropius took it upon himself to attract renowned artists to Weimar to work as instructors. Among others, Lyonel Feininger, Josef Albers, Paul Klee and Oskar Schlemmer answered the call. As a result, the Bauhaus faculty represented a coming together of the important minds of the European avant-garde, who sought to realize their visions of cosmopolitanism and international diversity. In this first phase, the Bauhaus resembled a large creative laboratory for experimentation with different materials, forms, colors and indeed a whole range of playful ideas.

But as one would expect, the teaching staff at the Bauhaus was also a breeding ground for very peculiar characters and somewhat contradictory theories. Over time, Walter Gropius was increasingly required to act less like the director of a university and more like a tamer in a circus of artistic conceits and personal vanities.

Josef Albers, who held various positions over a many-year stint at the Bauhaus, would later report with some pride that people “never agreed on anything. If Wassily Kandinsky said yes, I said no. And if he said no, I said yes.” But above all it was the increasingly combative relationship between Gropius and his deputy, Itten, that would prove most consequential. The latter’s aggressive advocacy of his own religious and philosophical convictions resulted in his leaving the Bauhaus in 1923 and his replacement by the constructivist László Moholy-Nagy.

This phase also saw the Bauhaus face intense pressure from the Dutch de Stijl artist and propagandist Theo van Doesburg, who had in mind something of a hostile takeover of the Bauhaus. His influence and the school’s attempts at grappling with the demands of a technology-oriented world led the Bauhaus to take on a more pragmatic, functional approach, which itself was the cause of much controversy.

This process culminated in the 1923 Bauhaus Exhibition, the school’s first large-scale self-presentation, where several of its early design classics could be appreciated, such as the now famous Bauhaus Lamp by Jucker and Wagenfeld. Although public reaction was generally enthusias­tic, the exhibition also bred some skepticism. In the sardonic words of writer and critic Paul Westheim: “Three days in Weimar and you’ve seen enough squares for a lifetime.”

In retrospect, this exhibition marked the starting point of an epic journey through the leg­endary and influential Bauhaus years in Dessau (1925–1931), the short yet dramatic phase in Berlin (1932–1933) and culminating with another groundbreaking spectacle: the legendary 1932 architecture exhibition at New York’s Museum of Modern Art. “It was of central importance for the adoption of European modernity and the American realignment of modern architecture,” writes de Rudder in his essay “Wechselnde Zuschreibungen. Moderne Architektur zwischen Amerika und Deutschland” (Alternating attributions. Modern architecture between America and Germany). Under the title “Modern Architecture – International Exhibition,” the curators, Philip Johnson and Henry Russell Hitchcock, showed a selection of realized designs predominantly by European modern architects, including highly prominent masters from the Bauhaus.

The exhibition began in New York and toured the US with huge success for over two years; it also coined the term “International Style” (Hitchcock). “It denoted an architecture that the US sought to make its own, in an attempt to – somewhat simplistically – lend expression to the great-power status of the US in the realm of culture as well,” claims de Rudder. “Here it was, this auspicious, new form that would become filled with American content and transformed into a new and, for the first time, originally American architecture.”

Seen in this light, it is easy to understand why the defining personalities of the Bauhaus were given the red-carpet treatment in the US after the Nazis gained power in Germany; many were promptly appointed to leading positions at renowned educational institutions. In 1937, Walter Gropius came, via England, to the US, where he was immediately installed as an architecture professor at the Harvard Graduate School of Design. He would become director of the architecture department in 1938, the same year he organized the “Bauhaus 1919–1928” exhibition at the MoMA in New York.

In 1938, Mies van der Rohe, the last director of the Bauhaus, resumed his teaching activities as the new director of the architecture department at the Armour Institute in Chicago. He then hired two of his former Bauhaus colleagues to its faculty: Walter Peterhans from New York, who established the seminars for visual training, and Ludwig Hilberseimer, who took over the field of urban development.

More than anyone else, Mies van der Rohe succeeded in implementing the International Style in the US, including his designs for the world-renowned Farnsworth House in a suburb of Chicago. Three years later, Mies won the commission to design his first office skyscraper, the 1958 Seagram Building in Midtown Manhattan, considered by many to be his finest work With help from Walter Gropius, in 1937 László Moholy-Nagy was appointed director of the new Chicago design school called New Bauhaus – American School of Design, which was forced to close a year later for financial reasons. In 1939, Moholy-Nagy founded its successor institution, the Chicago School of Design, which was restructured in 1944 as the Institute of Design.

Joseph Albers, one of the last masters of the Bauhaus, was ultimately hired at Black Mountain College in Ashville, North Carolina, where he taught art until 1949 to, among others, Willem de Kooning, Robert Motherwell and Robert Rauschenberg.

The seeds of the Bauhaus undeniably bore ample fruit in the US, yet they did so in their own specific way. Particularly in terms of the further development of the International Style, the social, artistic and political factors present at the emergence of the Bauhaus were consciously neglected; moreover, issues relating to formal instruction no longer played a role. “As a matter of fact,” claims de Rudder, “severing ties with the connotations associated with the Bauhaus was also understood as a liberation, as the purging of a superstructure that had become obsolete, and as a prerequisite for the advancement and transformation of modern architecture.”

This year, this international exhibition and event series “bauhaus imaginista” is tracing the global intertwinements and current relevance of Bauhaus ideas across five different continents. For its grand finale in 2019, “bauhaus imaginista” will return to Germany with the results of its investigations.

The actual Bauhaus centennial in 2019 will begin with a large opening festival in Berlin from Jan. 16-24 and feature contemporary international performances, music by instructors and students of the Bauhaus and its successor institutions, Bauhaus films and plenty more. All Bauhaus sites in Germany have combined to form the Bauhaus Association 2019, which is planning a multitude of peripheral exhibitions, art projects, events and actions. In its totality, it will show where and how Bauhaus architecture, urban planning, design, photography and dance have left their mark. Large centennial exhibitions will be held at all three Bauhaus locations – Weimar, Dessau and Berlin – where in each case a new museum building will be inaugurated. A good overview of the entire program, in both English and German, can be found at www.bauhaus100.de. 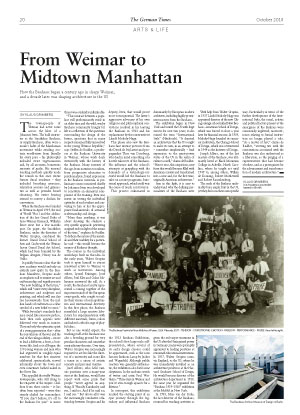