Natural gas and oil are a shout-out from a distant past. Several hundred millions of years passed before dead biomass at the bottom of primordial oceans formed the energy sources that run today’s motors, comprise our industrial products and heat our homes.

But things have since considerably accelerated, as gas and oil can now also be created artificially, from hydrogen and carbon combined in a refinery to create various combustibles and fuels. This process is called power-to-X. Its allure derives from the fact that the natural gas, gasoline, diesel fuel, kerosene and heating oil it creates is climate-neutral when produced using green hydrogen. Green? The label may list hydrogen that stems from an electrolyzer powered with green electricity. The facility uses the current to split water into its component parts, hydrogen and oxygen.

Electrolysis is one of the key technologies for climate protection. Green hydrogen – pure or processed into synthetic combustibles or fuels – will be a crucial element in making industry and motorized traffic climate-neutral, especially where it is not possible to use a direct source of green electricity, such as with air traffic, shipping, heavy transport and in many industrial processes. In the future, hydrogen will be deployed in gas power stations as well. The plants are indispensable in buffering the fluctuating yields of wind turbines and photovoltaic facilities.

When researchers at the Fraunhofer Institute for Wind Energy and Energy System Technology (IWES) and the Center for Solar Energy and Hydrogen Research Baden-Württemberg (ZSW) developed the power-to-X concept ten years ago, they had a different goal in mind; they wanted to create a certain type of energy storage device. The electrolyzers, according to the thinking of the scientists, should above all be used when more wind energy is produced than is immediately necessary or the grid can accommodate. When fed into the existing gas grid, gas power stations can then produce energy from the hydrogen later upon demand. Power-to-X thus contributes to the integration of weather-dependent wind energy and photovoltaics into the power system.

Numerous pilot projects at companies and research institutes are currently experimenting with how hydrogen concepts can be put into practice. For example, in the region of North Frisia in northern Germany, the renewable energies project planner GP Joule is partnering with others to install – in the immediate vicinity to several wind turbines – five electrolyzers that will produce hydrogen for two gas stations in the region. In order to stimulate demand, the project corporation will purchase two fuel cell busses and make them available to the local regional transport system for its various vehicles. The heat lost during electrolysis is fed into a local heat grid supplying local homes and municipal properties.

In the steel industry, the climate-protection potential of power-to-X is enormous. “Whether it’s the production of the basic chemicals ethene and methanol, the manufacturing of ammonia for fertilizer, or the glass and metal industry – the only path for industry to substitute fossil fuels with climate-neutral alternatives leads to green hydrogen,” explains Michael Sterner, professor for energy storage and energy systems at the Regensburg University of Applied Sciences (OTH).

According to the German Technical and Scientific Association for Gas and Water (DVGW), Germany has some three-dozen electrolyzers in operation. Together they account for an output of around 30 megawatts. They can realize just about as much electricity as ten modern wind turbines on land can deliver while operating at full capacity. Therefore, to achieve Germany’s climate goals, the installed capacity must grow markedly and fast. “In the next few years, we need double-digit annual growth in megawatt range, and then triple-digit growth by 2025. By the end of the decade, range must expand by at least a gigawatt each year,” explains Christopher Hebling, director of hydrogen technologies at the Fraunhofer Institute for Solar Energy Systems (ISE).

Such growth can only be achieved if hydrogen production quickly becomes an attractive business model, which is hardly the case as of today.

The systems currently installed are far from profitable; they’re much too expensive. This is mainly due to the fact that electrolyzers are still largely manufactured by hand. Scaling up production would result in a significant drop in prices. A similar effect would be seen for facilities that could use hydrogen, such as fuel cells, for transport; these, too, are still much too expensive for commercial operations.

The hydrogen production market is thus vulnerable to the classic chicken-and-the-egg problem common to young markets – costs are high because investors are scarce, and investors are scarce because costs are high. For this reason, the German cabinet presented a national hydrogen strategy this past summer. Its goal is to establish a domestic market to make hydrogen competitive, with measures that include reforming the system of taxes, duties and costs related to energy carriers and establishing a range of promotional initiatives. The Federal Republic is seeking to provide €7 billion for ramping up hydrogen technologies in Germany, which would account for the installation of up to five gigawatts of electrolysis capacity by 2030. An additional five gigawatts would be installed by 2035.

However, this would fall far short of covering the future need for hydrogen. Imports must be heavily relied upon to satisfy demand. The national hydrogen strategy thus envisions close cooperation with countries that have high potential for generating green hydrogen – for example, in Scandinavia and Southern Europe. The German government is also seeking to collaborate with countries in North Africa.

The goal is to create planning certainty for future suppliers, consumers and investors on the domestic front and abroad. Another important factor is the energy partnerships Germany has already forged with a number of countries, including in Africa. A total of €2 billion is earmarked for international cooperation.

If the vast majority of production must take place outside of the country, why should Germany invest in the effort to establish such infrastructure at a multi-gigawatt scale? Because technology is required to integrate wind turbines and photovoltaic plants into the power system, says Fraunhofer’s Hebling. “The electrolyzers are a critically important instrument for grid regulation.”

If renewable energies are expanded as widely as planned, it will often be the case that much more electricity is made available than the grid can take accommodate. Electrolyzers prevent wind turbines and solar plants from needing to curtail their output, as was foreseen by the researchers developing the concept ten years hence. In the words of Hebling: “We need both: power-to-X plants with multi-gigawatt capacity in Germany, and an influx of large amounts hydrogen-based energy carriers from abroad.”

Ralph Diermann
is a freelance journalist specializing in energy topics. He frequently writes for the Süddeutsche Zeitung and the Neue Zürcher Zeitung. 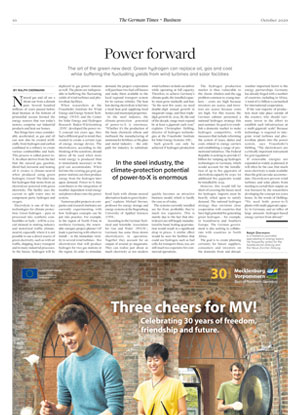