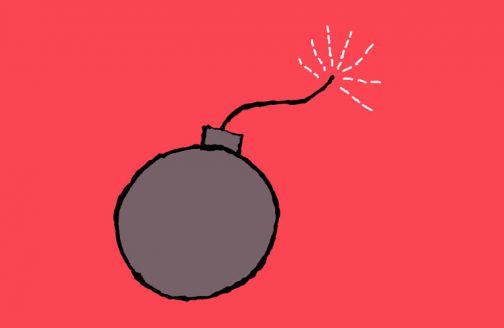 If someone found a one-thousand-pound unexploded bomb in downtown Manhattan or along the banks of the Potomac in Washington, there’s no doubt it would make international headlines. News outlets would race to cover the evacuation process, and journalists would park their mobile-broadcast vans on site, hoping to get the first footage of a possible detonation.

In Germany, however, such discoveries are made on an almost daily basis – often in major cities such as Berlin, Frankfurt and Cologne – with nothing more than a passing note in the local newspaper. Of course, the bombs and other munitions being unearthed from the German depths are nothing new, literally. Almost all of them are leftovers from World War II, when the Allies dropped roughly 2.7 million tons of airborne ordnance on Europe – half of that on Germany – in their endeavor to rid the continent of fascism. Experts estimate that as many as 10 percent of those bombs, shells and grenades failed to explode, however, which is why they continue to pop up, forcing each new generation of Germans to confront a terrifying era in their history.

Or not. If truth be told, the presence of these leftover weapons is so ubiquitous that most Germans and longtime residents are usually nonplussed when news of a Munitionsfund – munitions find – makes its way into their lives. In fact, headlines such as “Passerby finds WWII bomb on the banks of the Rhine” are not uncommon in the back pages of newspapers. In August 2018, for example, in the town of Mönchengladbach in North Rhine-Westphalia, a man who had found a metal cylinder while gardening in his backyard simply placed the object in a cardboard box, put it in his car and drove it to the local fire station. Needless to say, the firefighters were less than pleased when he showed up with what turned out to be an unexploded British-made bomb.

These pieces of unexploded ordnance, which are referred to in Germany as Blindgänger – blind walkers, or military lingo for duds – started wreaking havoc throughout the country almost immediately after World War II ended. And they haven’t let up since. It’s precisely because duds never stopped posing the risk of detonation that each new generation of Germans has long since gotten used to stumbling upon them, often in the middle of their most populated cities.

For example, on the evening of Friday, April 13, 2018, parents at an elementary school in Mitte, a cosmopolitan district in downtown Berlin, received the following email from the principal: “Dear Parents,” it read, “We would like to inform you that munitions were found on [the school’s] construction site this morning. The annex wing and some rooms in the main building were closed. The police cordoned off a large area around the school. Your children were cared for during this time. After an hour, the danger had passed and everyone was permitted to return to their classrooms.” The principal signed off her email with the words “Have a relaxing weekend!” and “Hope to see you all tomorrow at our annual spring courtyard cleanup!”

For foreign tourists, visitors from abroad and especially non-German helicopter parents, such a blasé approach to unexploded ordnance can be jaw-dropping or, at best, difficult to comprehend. When Berlin boasts of being a family-friendly city where history echoes on every street corner and each step holds new and exciting discoveries, one doesn’t expect this to involve a historical legacy that could actually blow up. And having to add the potential of exploding Nazi-era munitions to the list of concerns for their children’s safety is a lot to ask of the average couple raising a family in the nation’s capital.

But it’s not just in hot spots like downtown Berlin that these uncanny remnants of World War II continue to pop up. Just last month, on Aug. 9, two children swimming in Gorinsee Lake, a popular summer-weekend destination 40 minutes by car from the Brandenburg Gate, noticed a strange object in the water that later turned out to be a World War II hand grenade. The police were called in and over 100 bathers ordered to leave the lake immediately. Only three hours later, after the Kampfmittelbeseitigungsdienst – a delightful German compound word for the combat weapon removal service – had given the all-clear, were bathers allowed to return to their summer merrymaking.

How might we explain the relative composure of Germans and longtime residents vis-à-vis these explosive reminders of times past? Again, the short answer is very simple: they’re used to them. Much like a snow day in Canada or a bushfire-related closing in Australia, each new generation of kids in Germany is introduced to the idea that there are bombs and grenades that need to be removed by teams of specialists; and in order for that work to be done properly, everyone needs to leave the area for a bit. In other words, as long as their parents are chill, no child is going to question how it’s possible that someone just found a 75-year-old bomb in the very spot where they’d been playing volleyball and practicing handstands for the past six years.

Unfortunately, things do not always turn out for the best when it comes to these combustible messengers from below. On Aug. 10 of this year, only one day after the summer bathers at Gorinsee were interrupted in their revelry, a 21-year-old police officer in the Munich district of Freimann was seriously injured by a phosphorous World War II bomb that exploded as he approached to extinguish what passersby had told him was a fire; the phosphorous had reacted and detonated, causing the officer to suffer massive burns on his arms, legs and head. In fact, every once in a while, these munitions actually claim lives in Germany. Back in 2010, in the city of Göttingen, three highly trained experts were killed after a bomb they were in the process of defusing detonated unexpectedly.

No matter how much people have gotten used to it, unexploded artillery is still a very serious business in Germany. The country has a massive system in place to scan the earth below and, when something is found, to deal with the menace as quickly, safely and efficiently as possible. To get an idea of the scale of the operation involved after a large Munitionsfund in a populated area, we need only look at what happened this past June when a British bomb was found at the bottom of the Havel River in downtown Potsdam.

After examining the 250-kg blind walker, demolition experts determined that it was too dangerous to attempt to defuse it under water or remove it to be exploded elsewhere; the bomb was going to have to be blown up right where it was. The result was the largest ever evacuation in the history of Potsdam.

Among the buildings that had to be evacuated were Potsdam Central Station, several state ministries, the state parliament, the state chancellery as well as a number of museums. Roughly 13,000 people were also forced out of their apartments, and the residents of three nursing homes had to be evacuated to emergency shelters. And let’s not forget that this took place in the middle of a global pandemic. The evacuation of the seniors, for example, had to be carried out in shifts, with each nursing home assigned its own alternative accommodation so as to avoid contact. After a number of delays, including a heavy thunderstorm and several people attempting to sneak back into the restricted area set up by police, the bomb was finally detonated with only minor damage to surrounding trees.

If we see the ground underneath cities like Potsdam and Berlin as a palimpsest embodying the country’s rich yet also terrifying social, architectural and political history, these unexploded bombs are one of its deepest, most revealing layers. Unlike the elegant Stolpersteine, those golden cobblestones found throughout the country that ask passersby to reflect for a moment on the residents taken from their homes and murdered in concentration camps, these munitions – when they appear – scream up from the ground below and aggressively demand attention. Unfortunately for both the elegant and the not-so-elegant reminders, many people have long stopped noticing.

J. J. Hagedorn
is an author living in Berlin. 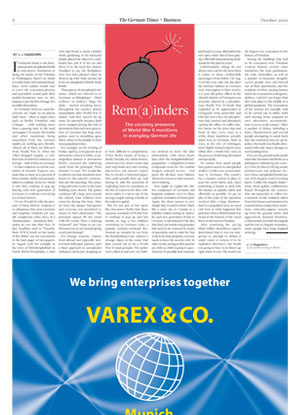