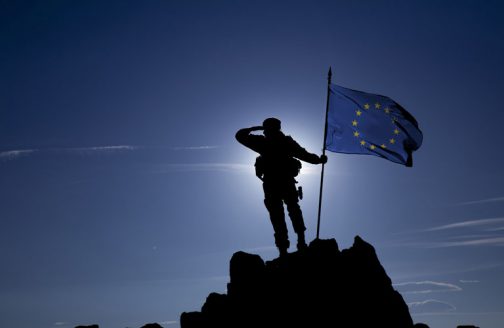 NATO is not dead. European defense budgets have been rising steadily since 2014; American forces are staying in Europe; and Donald Trump will eventually leave the White House. Yet Europe can no longer assume the permanence of the historically exceptional strategic order created some 70 years ago. China has become the United States’ peer competitor and the Indo-Pacific is the key theater in which that relationship will play out, with Russia providing a check on some of China’s ambitions. US engagement in and with Europe will be fully determined by that reality.

While the Trump era did not create this trend, it has accelerated it, and the transactionalism introduced by Trump into Alliance relationships cannot readily be undone. By historical standards, the unconditional post-World War II alliance system is the exception, whereas transactionalism is the default mode. Thus, Europe must prepare for what will be referred to as the post-Alliance era, in which coalitions and partnerships between the nations of the West will remain important but will be of a conditional, task-oriented and transient nature. In effect, Donald Rumsfeld’s statement after Sept. 11 that “the mission determines the coalition” describes the new normal, not simply a specific moment in time.

For Europe to meet the challenge, several existential decisions will have to be made. Paradoxically, the politically most visible item is also the least existential: levels of defense spending. Europe, however defined, spends more than four times what Russia does on defense and at least as much as China. Of course, as China’s capabilities rise and Russia modernizes its forces, a good military case can be made for increasing our defense budgets and a political argument just as strong can be made in the name of burden sharing, i.e. the benchmark of spending 2 percent of GDP on defense. But if our problems could be solved merely by spending, our life would be quite simple. Our main challenges lie elsewhere.

First, as the Atlantic security blanket loses its permanence, Europe must decide who it is and what it is. Is it the European Union? Then what happens post-Brexit? Is there a “core Europe”? And if so, who belongs? And why not recreate a Western European Union, one that would provide a home for the post-Brexit UK? But how to go about it? With no clear answers, there will be no space for a common European strategy, let alone a European army.

Second, a shared understanding has to emerge as to the nature of the threats and risks we have to face. Brave attempts have been made with the successive Solana (2003) and Mogherini (2016) documents. While they may be useful as snapshots of the world at the time of their publication, they are of little use as a guide to what awaits us. Who would guess from a reading of the Mogherini document that the US-Chinese strategic contest is the pivot around which US-EU and EU-Chinese relations will increasingly revolve?

Third, Europe will need to define its basic strategic objectives, which would arguably comprise three pillars: protection from the repercussions of war and state-collapse in the Middle East and Africa, including conflict exacerbated by climate change; defense against Chinese strategic attempts at control of the global commons from the South China Sea to cyberspace, technological predation and the leveraging by China of “debt equity swaps” for strategic gain, already a factor in Asia and Africa and now spreading to the Balkans; and, deterrence and counterattack vis-à-vis Russian revisionism and interference from the Arctic to the Mediterranean.

A white-paper strategic assessment could then outline appropriate strategic choices to be made, such as: 1) thinking through the balancing of our economic interests with China and our strategic partnership with the US in its competition with China; 2) reviewing the policy mix in terms of the immediate threat from our revisionist neighbor Russia and the growing challenge from its bigger and more ambitious strategic partner, China; 3) revisiting Europe’s strategic posture in the Middle East and Africa, including the actual – not merely rhetorical– ability to integrate the tools of defense, diplomacy and development; 4) agreeing on the terms of Europe’s burden-sharing debate, without which it cannot be resolved. Again, this is not principally about money, but rather risk-sharing. A system in which the French or the British do the shooting and take the casualties while others do training, as is currently the case in the Sahel, is not politically sustainable. Shared risk-taking should have a flip side: shared decision-making. A grand compromise along these lines is necessary. Paris may be more prepared for it than officials in Berlin may think. The same remark applies to the field of nuclear deterrence .

Talk of European defense and a European army has gone on for close to 70 years. And the more florid the talk, the greater the disconnect from the real world – hence its persistent political appeal. What we do have is as follows: 1) the continued existence of substantial national armies, some with broad and global capabilities, many with legitimate niche capabilities; 2) limited yet increasing levels of defense expenditure; 3) new and potentially substantial means to build defense industrial capabilities as well as military acquisition at the EU level through the European Defence Fund, interfacing with the European Intervention Initiative (with the UK) and so-called PESCO; 4) substantial development and diplomatic assets with global reach, albeit hampered by our practical inability (as opposed to our rhetorical ambition) to synchronize them with each other and with defense policy, whether jointly or separately.

These instruments all exist or are in the process of development. It remains to be seen whether we build on them or succumb to the sterile temptation of producing yet more Zukunftsmusik – compelling yet impractical dreams of the future.

This basic list of conditions for the defense of Europe in a post-Alliance world could alone cause despair. And the sense of foreboding only worsens when taking into account the growing divisions within and between European countries and peoples in the form of right- and left-wing extremism. Only the thought that previous generations somehow rose to meet greater challenges offers some reassurance.

What is clear, however, is that none of these conditions can be met without agreement between France and Germany. France’s domestic situation remains uncertain, with a question mark on President Emmanuel Macron’s political ability to continue the reform process launched in 2017; but the president was elected promising an agenda of European change. Germany has the opposite problem: no electoral mandate for big changes in Europe and a generally good economic situation that breeds inertia rather than the will to launch new initiatives. The result has been more Sonntagsreden and less dynamism. As the Merkel era and the grand coalition come to close, a window of opportunity may just open.

A version of this article appears in print on Feb. 15, 2019, on Page 6 of The Security Times with the headline: No platitudes

François Heisbourg
is a special advisor at the Fondation pour la Recherche Stratégique, and a senior advisor for Europe at the International Institute for Strategic Studies. 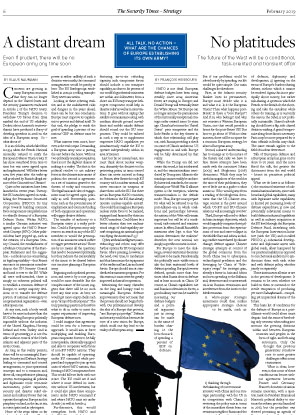