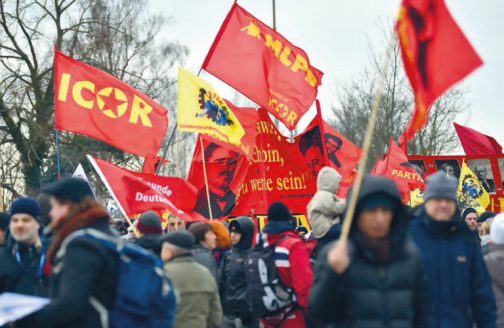 They’re easy to spot, even at a distance. Retirees bundled up in thick winter jackets and fur hats trudging towards the exit at the Berlin Lichtenberg S-Bahn station. The color spectrum worn by the members of this crowd ranges from gray to beige, while their facial expressions run between reverent and grim. The only splash of color in this procession of seniors is the red carnations they often carry. These flowers provide the decisive clue as to where their strangely uniform caravan is headed, namely to the official Memorial to the Socialists in Berlin-Friedrichsfelde.

This memorial procession takes place every year on the second Sunday in January. It is held in honor of Rosa Luxemburg and Karl Liebknecht, two of the leading figures of the German workers movement at the beginning of the 20th century. Leftists of all persuasions participate in this slow walk, which ends at the last resting ground of these two icons and other estimable socialists. In the coming year, this annual commemorative gathering will have a special significance, as it will mark the 100th anniversary of the death of Luxemburg and Liebknecht. On Jan. 15, 1919, after the brutal defeat of the Spartacist uprising in Berlin, they were both murdered by members of right-wing Freikorps, voluntary vigilante militias comprising former soldiers from the Prussian army.

During the GDR, this hallowed procession to the Memorial to the Socialists represented an important Kampfdemonstration – a demonstration of continued struggle – carried out by the state leadership and the ruling communist party. It was designed to symbolically renew the legacy of Luxemburg and Liebknecht in East Germany each year. Nothing was left to chance at this carefully prepared march that started at Frankfurter Tor at the edge of downtown East Berlin. For loyal party bigwigs, it marked a solemn day on the socialist calendar. The majority of the other “demonstrators,” however, were forced to attend by various factory organizations, schools and other groups. It became quite clear that the longer the GDR existed, the less enthusiasm there was for the event. Apart from the apparat­chiks and devout comrades, the majority of the participants forced to attend could be seen trotting rather listlessly past the graves and the VIP stand.

In contrast, the individuals who have been taking part in the march since the fall of the GDR have done so with vigor and sincerity. It’s the pensioners above all who cling unbendingly to the socialist tradition. These cadres of yesteryear are individuals who boldly continue to believe in the victory of socialism and see German reunification as a hostile takeover by imperialist forces. These men and women shake hands with familiarity; they know each other from back then. They know they are united in their defiant adherence to the ideals of socialism. The beginning of one popular children’s song in the GDR went: “Dem Karl Liebknecht haben wir’s geschworen, der Rosa Luxemburg reichen wir die Hand” (We have sworn to Karl Liebknecht we’ll give Rosa Luxemburg a helping hand). For most of the elderly comrades at the annual march, these words continue to inspire.

Later on, after the Goths of socialism have laid down their carnations, things get a bit more colorful. To this day, party chairmen and leading left-wing party members from all over Europe use the opportunity to make their pilgrimage to the graves in Friedrichsfelde at the head of a mass demonstration. This coming January, an especially large crowd of celebrities is anticipated. An alliance of a wide spectrum of left-wing groups is expected to march to the memorial. It seems the memorial march allows them to forget their trench battles and turf wars for a couple of hours. And then, as soon as they arrive at their destination, the event starts to look more like a community fair featuring stalls with food produced in socialist solidarity and musical groups playing old battle songs to lift leftist spirits. Of course, there are also the obligatory bookstands where one can find literature designed to foster more in-depth study of leftist theories.

But things weren’t always this peaceful at the annual Luxemburg-Liebknecht demonstration. In 1988, citizens’ rights activists in the GDR had already begun to advocate for a democratization of their country and were planning to participate in the state-orchestrated mass gathering. Their goal was to take Rosa Luxemburg at her word by rendering some of her quotes onto the self-made banners they intended to display during the official march: “Freedom is always freedom for the one who thinks differently” and “Those who do not move do not notice their chains.” Of course, the GDR’s secret security forces were already well-informed about the plans and went about stifling the action. However, there also happened to be West German camera teams on site, and their images capturing the rabid suppression of the activists were broadcast around the world. This resulted in protests in several East German cities against the mass arrests that had taken place both before and after the demonstration. Some historians see the events of Jan. 17, 1988, as the first evidence of a tangible beginning to the Peaceful Revolution in the GDR, which would eventually bring down the Wall in 1989.

In the hundred years since their deaths, many a battle has been fought over the true legacy of Rosa Luxemburg and Karl Liebknecht. Time and again, the thoughts and writings of the two socialists have been interpreted and instrumentalized, as they surely will continue to be in the future. At the memorial march in early January 2019, the old comrades from the GDR and young leftists from today will come together in their worship of these two larger-than-life role models. And yet, if you sat these groups down for a discussion at a single table, they would likely have very little to say to each other. 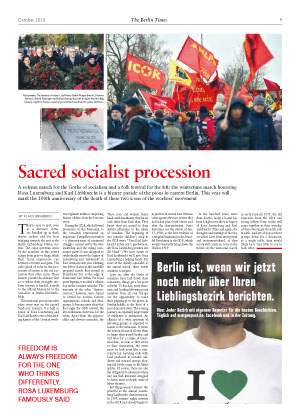