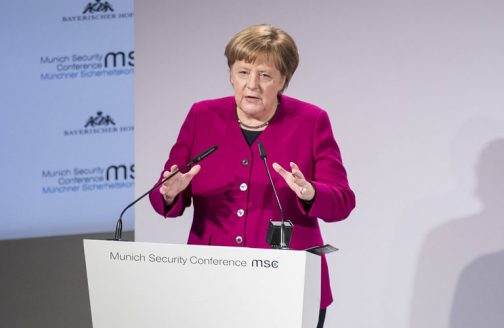 This year’s Munich Security Conference (MSC) – the security and foreign policy twin of the Davos World Economic Forum – convened under dark clouds of doom and gloom. The over 800 participants – among them 19 presidents, 13 heads of government, 83 ministers of defense and foreign affairs, a 50-person US congressional delegation, high-ranking diplomats and military officers from all over the globe – came together at a time when the world order is in utter disarray. Wolfgang Ischinger, chairman of the MSC, made no bones about it. As he put it in his welcoming remarks, we are currently witnessing “a reshuffling of core pieces of the international order… The kind of new order that will emerge remains unclear.”

Not only is the world economy weakening, as tariff conflicts herald a pernicious trade war, but the certainties of international cooperation are also waning and vanishing in the political realm, as America’s retreat from global leadership and the rise of Xi Jinping’s China upend the prevailing power patterns of the past 70 years. Geopolitical conflict has become thinkable once again. “We find ourselves in a situation potentially more dangerous than at any point since the end of the Cold War,” said Ischinger. The Bulletin of the Atomic Scientists has once again set its Doomsday Clock to 11:58 p.m. – two minutes before the symbolic midnight apocalypse, the same this year as back in 1953.

The worst feature of this depressing picture is the fraying of what used to be called the West, the free world or the liberal international order, a fraying to the point of dissolution. Roger Cohen, the perspicacious international correspondent for The New York Times, felt justified after the Munich conference to compose a “requiem for the West.” Like most Europeans, especially the Germans, he puts the blame squarely on the shoulders of US President Donald Trump, his relentless Europe bashing and his disrespect for allies, international institutions and anything that reeks of cooperation and compromise; in other words, for multilateralism. A collaborative approach is not his cup of tea.

In the spirit of reckless unilateralism, Trump has been shedding America’s global commitments. He withdrew from the Trans-Pacific Partnership (TPP), the Paris Climate Agreement, the Joint Comprehensive Plan of Action (JCPOA) – commonly known as the Iran nuclear deal – and, most recently, from the INF arms control treaty with Russia. Having called Europe a “foe” and welcomed the EU’s breakup through Brexit, he has also repeatedly questioned the US commitment to defend NATO partners; reportedly he has privately told aides that he wants to leave the “obsolete” alliance. In Munich, the dissent within the trans-Atlantic community found its clearest expression in two speeches. German Chancellor Angela Merkel passionately invoked the spirit of multilateralism and togetherness, whereas US Vice President Mike Pence delivered a stilted teleprompter presentation of undiluted Trumpism.

Merkel’s message was clear. The world order shaped by the US after World War II is “coming under incredible pressure,” but we must not let it be smashed; rather, we must reform it. In meeting the enormous challenges facing mankind, one should not think “that each of us can best solve the problem single-handedly.” With approval she quoted Senator Lindsey Graham’s statement that “multilateralism may be complicated, but it’s better than staying at home alone.” Cooperation and compromise, he argued, are the order of the day.

Without ever mentioning Trump by name, the chancellor turned her fire on several aspects of the president’s America First policy.

The motto of this year’s Munich Security Conference was “The Great Puzzle: Who Will Pick up the Pieces?” Chancellor Merkel gave her answer in the last sentence of her address: “Nur wir alle zusammen – only all of us together!” A storm of applause was the reaction of the audience, a standing ovation lasting several minutes.

The next speaker was Vice President Mike Pence. His speech seemed to be geared only to one single listener, wrote the Süddeutsche Zeitung, that is, President Trump, whom Pence obsequiously mentioned once a minute – 34 times all told. In fact, his speech was calibrated to suit a campaign rally rather than an international audience. And unlike Chancellor Merkel, Russian Foreign Minister Sergey Lavrov and the other speakers, upon finishing he cut and ran without taking any questions.

The vice president extolled the achievements of the Trump administration with fulsome repetitiousness. “Today, America is stronger than ever before, and America is leading on the world stage once again,” was the thrust of his address, neglecting the fact that it is leading largely without followers. His vision of US leadership appears to be telling other nations what to do. “The time has come for our European partners to…” he kept repeating: time to withdraw from the Iran nuclear deal, time to stop undermining US sanctions, time to take a strong stand against Nord Stream 2, time to do this and that. It sounded like a Befehlsausgabe, commented Der Spiegel – barking orders. Allies he treated as vassals. Common solutions? No way. Referring to Nord Stream 2, Pence even threatened putting an end to alliance solidarity: “We cannot pay for the defense of the West if our allies grow dependent on the East.”

The reaction of the audience was more than tepid. This was not an expression of anti-Americanism. Indeed, there is a rift between most of Europe and both President Trump and his administration, but no animus against the United States as such. This became overwhelmingly clear when former Vice President Joe Biden stepped up to the rostrum. He repudiated Trump’s go-it-alone politics, assuring the audience that the US will remain committed to its allies despite a perception that the country is pulling away from the world and its leadership responsibilities. “The American people understand,” he said, “that it’s only by working in cooperation with our friends that we are going to be able to harness the forces of a rapidly changing world, to mitigate their downsides and turn them to our collective advantage.”

Referring to the isolationist policies of the current administration, Biden ended his speech: “I promise you, as my mother would say, this too shall pass. We will be back. Don’t have any doubt about that.” It earned him, too, a storm of applause. It gave the participants hope that the current alienation won’t last. Discord won’t be forever. Germany will do everything to make Europe a stronger partner in the trans-Atlantic community of the future. 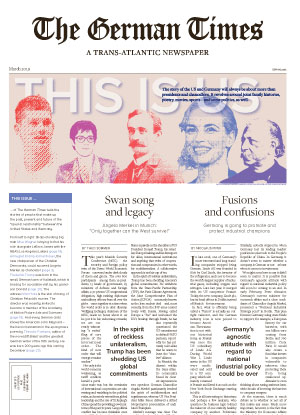