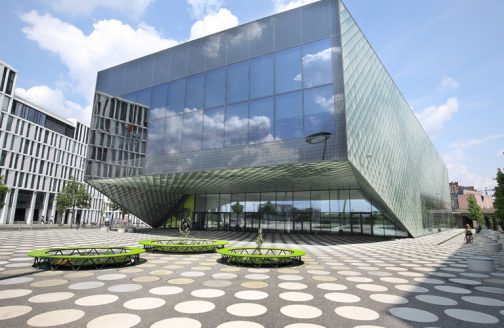 Can trees grow out of houses? Are robots taking over? Are we done with globalization? At first glance, these three questions have nothing in common. If we take a closer look, however, we see a shared theme: the future.

These and many other future-related issues are the key themes being examined at the new Futurium in Berlin. This “House of Futures” is the only one of its kind in Europe and has three interactive “thinking rooms” that focus on the realms of technology, humans and nature respectively. The goal and purpose of the Futurium is to discuss current ideas and blueprints for the coming decades and also to weigh the risks and opportunities involved.

In previous centuries, human beings saw the future as some-thing immutable, that is, as either a favorable or unfavorable des-tiny we were obliged to accept. In the 20th century, this perception changed; in a technologized and ever-more digital world, we human beings are increasingly seeing ourselves as designers capable of having a decisive impact on the woes and well-being of the Earth.

Scientific and technical advances have raised the stakes, both good and bad. We have to keep up, in other words, with the possibilities come more responsibilities.

This shift in consciousness forms the conceptual foundation of the Futurium. Its function is not only to convey knowledge, but also to stimulate people to reflect on the world of tomorrow at every turn. The Futurium wants us to think about the contributions each one of us can make in our common quest to find answers to the most pressing challenges we face.

Back to the first question: Can trees grow out of buildings? Well, it might look a bit odd, but it actually works. The GraviPlant, created by a small Stuttgart-based startup, has the potential to revolutionize the greening of high-rise façades. A one-to-two-meter tree grows horizontally out of a fixed façade element with the help of a rotating plant unit. The façade is then able to provide better heat and sound insulation while also fostering better filtration of harmful substances and more oxygen for cleaner air. What more can we expect from a building?

The GraviPlant is only one of many ideas aiming to expand nature’s presence in big cities. Green roofs and vertical gar-dens, renaturated rivers and protected wastelands can also help to improve the microclimate in urban areas by adding trees, flowers and herbage to steel, glass and concrete. The greener the city, the more hospitable it is for human beings to live and work in.

Second question: Are the robots taking over? Well, it’s already clear today that robots are going to be natural companions in our everyday lives at some point in the future. In many areas, they already are; for example, in heavy industry and medical technology, robot-like machines already perform tasks with a level of precision that no human being could even dream of. But what happens when robots start to take on a more human like-ness and carry out simple activities and services in areas in which only human beings have worked up to now, such as nursing and homecare?

Indeed, one of the biggest challenges facing us in the coming decades is the task of determining the nature of the coexistence of human beings and machines over the long term. Are we human beings even going to need to work in the future, that is, if robots start to take on more and more jobs? And what are we going to do if artificial intelligence starts to exceed the intellectual capabilities of human beings? If we want robots to become our companions rather than threats or even enemies, we have to do a lot of thinking about our relationship to them.

Is globalization coming to an end? Even far into the 20th century, it was normal for people to both live and work in one neighborhood. For example, the factory owner lived in the front building, the factory space was in the rear buildings and the workers lived in the workers’ settlements nearby. Over the past decades, industrialization and globalization have completely separated these former worlds of living and working.

Today, however, there is a tangible countermovement visible in more and more cities. Old craft shops and new tech labs are emerging side-by-side; open workshops and co-working spaces are bringing together human beings with different skills; and new technology such as 3D printers can make do with much less space. The motto is “Think global, work local.” Why send ideas, human beings and goods around the world when local experts and trades can work even more closely together in effective on-site networks?

These three examples make it quite clear: the Futurium is not a museum that provides all the answers, but rather a place that asks us to come up with the best questions we can. The Futurium challenges every visitor to provide input on how to design and deter-mine the future. It’s impossible for a visitor to leave this unique museum without at least one new insight, especially as arriving visitors are given a take-home data chip with which to access back-ground information at the muse-um’s countless media stations – and later deepen their knowledge on their own computers at home.

The Futurium refuses to allow any of its guests to be passive or indifferent. It entices them to think hard and actively participate in the future. What else can you expect from a museum? 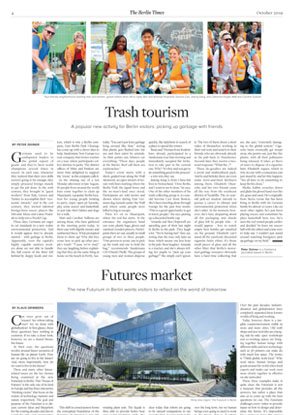