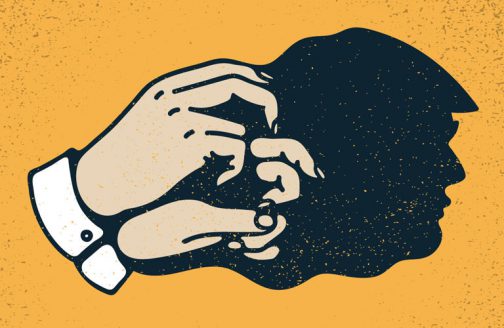 Donald Trump is causing Germans so much emotional grief these days that they can no longer soberly distinguish what’s good and bad for Germany, what poses a tangible danger to the country and what is, plainly put, just terribly annoying. At one point in time, Germans knew for certain that Russian missiles were pointed directly at them – and that it was US weapons that were protecting them from attack. Today, according to surveys carried out by YouGov and Forsa, two-thirds to three-quarters of German respondents believe that the US president is more dangerous than the dictator in the Kremlin.

Germans also used to be aware that they owed their rise to prominence as the world’s fourth strongest economic power to the existence of a liberal world order. They knew this order enabled their own export surplus, which in turn helped them achieve their own security, social welfare state and social peace. They understood that they would not be able to secure this basis for their success on their own steam, but rather only via their integration into the West. In other words, it’s not Germany’s navy that guarantees the free movement of goods through canals in Panama and the Suez, but rather, in case of doubt, the US military.

Many Germans now regard free-trade agreements as harmful contracts; this applies not only to the agreement with the United States (TTIP), but also to the agreement with Canada (CETA). There are even some critics questioning whether Germany should see itself as part of the West; they dream instead of taking up a neutral position equidistant to the major powers in the United States, China and Russia. They ignore the fact that Germany’s success is based on tangible and reliable rules of international economic exchange as well as on the NATO security pledge. A majority of Germans say they would not be willing to devote the necessary resources to defend their NATO allies against attack. This attitude puts the Germans in a very solitary position within the Alliance. In fact, views such as these are widespread among the Left and the AfD, but they are also articulated in the governing coalition parties, for example by SPD vice-chairman Ralf Stegner.

Although Germany’s federal government is indeed pursuing a more realistic course, while also heading up a multinational NATO unit in Lithuania and supporting France’s anti-terror mission in North Africa, the country prefers to remain silent on these foreign missions rather than praise them as evidence of how it is taking on international responsibilities. The government also refuses to entrust German soldiers with the same tasks as their fellow soldiers in France, Poland and the UK; this approach is driven by the idea that Germans should carry out transport duties and take photographs, but others should do the actual fighting.

The government also does not provide the funds necessary to ensure a functioning Bundeswehr. First, they refused to contribute the two percent of GDP they’d promised NATO to spend on defense, and now SPD Finance Minister Olaf Scholz is even calling into question the envisaged alternative of 1.5 percent of GDP by 2024.

At the same time, global attacks on the rules-based liberal order have been increasing and becoming bolder. These attacks are coming from Russia, China, NATO-partner Turkey and from the United States, which had been the main guarantor of world order until recently. The most serious attack can be attributed to Moscow. Putin broke the European peace order as it is anchored in the Charter of Paris when he occupied and annexed Crimea. For the first time since 1945, a border in Europe was violently displaced. In Eastern Ukraine, Putin is creating a further “frozen conflict.” In the Kerch Strait, he is breaking the treaty on cooperation governing the use of the Sea of Azov, while also demonstrating his ability to block all ports in Eastern Ukraine.

China, too, is attempting to expand its territorial waters and zones of influence by means of military might, for example, by transforming uninhabited reefs into military bases and ignoring the jurisdiction of the International Tribunal for the Law of the Sea. Among NATO and EU members, pledges of support and solidarity also seem to have only a limited binding effect. In the Syrian conflict, for example, Turkey bombarded the Kurdish militias that were fighting against IS as allies of the US. In the EU, Poland, Hungary, Romania and Bulgaria have violated basic principles of several treaties, while also ignoring democratic principles and the rule of law.

In the US, we have seen the election of Trump, a president who casts major doubt on rules-based order, blocks the appointment of judges to the World Trade Organization (WTO) and unceremoniously leaves international organizations and treaties.

Can German citizens and their government finally see that we are no longer dealing with individual cases, but instead with a dynamic that calls the entire rules-based order into question? And can they comprehend that this threatens the very basis of their own success? After the crimes and destruction of World War II, it was precisely this liberal order that enabled the Federal Republic to reintegrate into the community of nations and paved the way for its rise to the fourth-largest economy on the planet and the powerhouse behind the EU.

While it is true that Trump, too, contributes to the decay of the rules-based order, can he be said to be more dangerous to German interests than Vladimir Putin, Xi Jinping and Kim Jong-un, as many Germans have indicated in recent polls?

If Germans were honest with themselves, they would have to admit that there is an element of projection involved in their intense preoccupation with the US president. Why do they act as if he were the cause of the most pressing problems in the world? Because it distracts them from their own weaknesses. Indeed, all of the crises facing Europe today were evident before Trump entered the political stage in 2016: the euro crisis began in 2010, Russia’s war on Ukraine started in 2014, the migration crisis came to a head in 2015 and the Brexit drama was launched with the referendum in June 2016.

Yes, Trump is a huge problem. However, Germans’ behavior toward him is just as large a problem. They tend to ridicule him and complain about his assumptions. This is something politicians in Germany’s governing parties also do on a regular basis. It is very rare that we hear sober analyses of the ways in which we could approach and counter Trump in order to most effectively defend German interests. People in Germany like to complain about the weakness of American democracy, even though one could argue that the “checks and balances” built into the US system have actually proven mostly stable in the face of Trump so far. Courts are setting limits to the extent to which he can act; Congress regularly refuses to nod through his laws; and the media continues to show investigative zeal. Of course, these conflicts are by no means fun to watch. They are loud, messy and often repugnant. But aren’t they also evidence that democracy, the rule of law and freedom of expression are alive and well?

One would like to be able to say something similarly optimistic about Germany and the EU, perhaps something along the lines that they will assert themselves against the threats facing the rules-based order, against the dangers arising from populism and “fake news.” But there is very little that would allow us to utter such confident assertions. The EU is paralyzed by Brexit and other crises, and populists continue to enjoy one electoral success after the other.

Debates carried out in Germany regarding the current state of the world suffer from moral exaggeration and from low-level willingness to recognize their own inabilities as a problem and to correct their course. Society is moving right along with no tangible orientation, and the government lacks the courage to set a course forward in the right direction.

If one asks makers of foreign policy in the neighboring countries of France and Poland, in the EU capital of Brussels and in the US to speak about their image of Germany, the most frequent complaint is that Germans lack the will to think in geostrategic terms. They say that Germany’s foreign policy is reduced to trade interests, for example, with regard to China. They point out that Germany enjoys a free ride when it comes to security policy, relying entirely on its allies, while nevertheless refusing to pay the contributions it committed itself to paying – and which it should have to pay in keeping with its weight. And, finally, people say that when Germany participates in joint operations, it inevitably feels entitled to lay claim to special rules for itself.

Germans like to see themselves as being active in a manner that is in strict adherence to the law while also being pro- European and displaying admirable solidarity. It’s easy to forget that they were the first to break the Eurozone Stability & Growth Pact – starting in 2002 and onwards in several consecutive years. In the migration crisis, the federal government failed to consult with others when it made the momentous decision to let one million migrants into the country. In the realm of energy, it took the liberty of pursuing unilateral national policies on several occasions, whether it was phasing out nuclear power or building the Nord Stream 2 gas pipeline, which runs counter to the EU target of reducing dependency on individual supplier countries.

What are the reasons for Germany’s hesitancy to come to terms with the threats facing its own success model and to explore strategies designed to enhance security? First, it’s just plain habit. For decades, geostrategic thinking has neither been demanded of nor voluntarily practiced by Germans. Second, there is a sense of having been spared from international upheavals until now. When others are doing worse, they should orient themselves toward Germany. Ultimately, they think, everybody will become like us: democratic, freedom-loving fans of a state that is pacifist, climate-friendly and based on social welfare.

But the world is moving in a different direction. It is becoming more authoritarian. In Beijing, President Xi was granted full powers and is now more-or-less the new emperor of China. In Russia, Vladimir Putin is expanding his authoritarian state; dissenters are being murdered and neighbors who refuse to submit are plunged into war.

The doctrine guiding Germany’s behavior should be the following: The less we Germans can rely on others to defend the liberal order, the more we should have to do so ourselves. Germany must forge alliances to save the liberal order – with Canada, Japan, Australia, New Zealand – and make the EU prioritize this goal. Germany must do much more to enforce this order than ever before.

This includes the willingness to abandon national business interests in order to facilitate a common front against China together with the EU, the US and democracies in Asia. It also includes the will to fulfill its commitments to NATO and to take on the same tasks as other allies in joint missions – just as former Defense Minister Volker Rühe suggested in 2015. 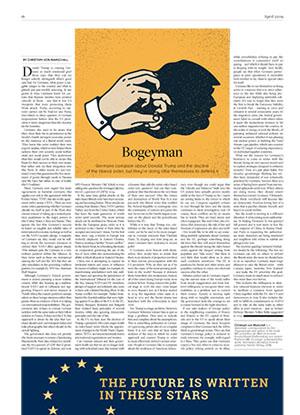