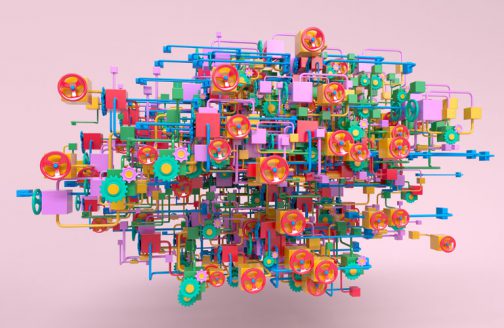 Jeremiads about the state of liberal democracy and its institutions have been the dissonant theme of 2019. The West as a whole is in decline; NATO is obsolete; once proud and powerful parliaments and congresses have been rendered superfluous. Autocratic rulers like Russia’s Vladimir Putin, China’s Xi Jinping and North Korea’s Kim Jong-un seize the day while Donald Trump, Boris Johnson and Jair Bolsonaro seem more inclined to emulate their governance than to stand up for the idea – and the practice – of liberty and a pluralistic society.

In Germany, the parties at the center are struggling to deal with the growing appeal of the Alternative for Germany (AfD), which is less a political body than the manifestation of a hodgepodge of racism, resentment and radical right-wing ideas. The party, barely six years old, has made considerable gains in recent regional elections, finishing second in two states (see page 1) without offering any coherent ideas of how to govern. Their slogans follow the drumbeat of most international far-right movements; they target immigrants and perceived elites while railing against what they refer to as the establishment’s tyranny of political correctness.

The AfD is built on the cult of the strongman, the crude longing for an “authentic” leader able and willing to put an end to the tedious game of politics and all the never-ending debating, negotiating and countervailing. They want their followers to believe that politics, the ever-muddy practice of true democracy, is practically and morally depraved and should be replaced by the dogged determination of a “chosen one.”

Sure enough, the dualistic conception of politics as either a game of eternally bound-to-fail compromise (played by those driven by the desire to debate another day) or ruling by fiat and forever – is not an autocratic fad of 2019.

This dualist view of politics is reflected in Samuel Johnson’s Dictionary of the English Language, published in 1759, which describes politics as “the Science of Government, the art or practice of administering public affairs.” Elsewhere in the dictionary, Johnson describes the politician not as an artist but one who is “cunning” and “a man of artifice.”

The contemporary German philosopher and political scientist Wolfgang Fach takes a modern view of Johnson’s dichotomy. “The contrast couldn’t be greater: there the divine action, here the devilish actors,” he writes in his treatise titled The Disappearance of Politics. Fach denotes the difference as “POLITICS (in all caps, because of its quasi-divine nature), understood as the transcendent care of and for the entirety; on the other hand, common politics, engaged in by self-appointed Machiavellian men, whose thinking is engulfed by immoral haggling without prospects.”

Fach diagnoses this tendency in all people, no matter their political affiliations: we want to believe in POLITICS, yet we despise the rigmarole of politics – and find ever-new ways of forgetting or suppressing the latter, without acknowledging the intertwined nature of the two concepts. We are blinded, Fach notes, by “the magic effect” of the otherworldly promise.

In this vein, countries long proud of their mature democracies, including Germany since 1949, may be said to be witnessing a rather vulgar re-enchantment of the great political idea by a faction of strongmen in the last 10 years. The promise of transcendence through political action is increasingly secularized. The aspiration to lift up every citizen – not to mention refugees from war and poverty around the world – is discarded in favor of a more particular promise of salvation. Or, as Adam Gopnik writes in his recent book on the “moral adventure of liberalism,” A Thousand Small Sanities, “everywhere we look, throughout Europe as much as in America, patriotism is being replaced with nationalism, pluralism by tribalism, impersonal justice by the tyrannical whim of autocrats who think only to punish their enemies and reward their hitmen.”

Deprived of its universal claim, something once upheld by both liberal and conservative notions of democratic politics, today’s strongman politics has embraced and indeed relies on simplistic concepts.

This is not just the ordinary argument for the necessity of expertise, impact analysis and inclusion of a plethora of perceptions in policymaking. The tax code, environmental regulation and government programs of all stripes rarely fit neatly into even the traditional categories of left and right, let alone the cruder ones of good and evil.

Nor is it the assertion that politics just happens to be a complicated technical affair better left to the elites and their dabblings in obscure jargon. The disapproval of political huskers and industry proxies rigging the game for the various 0.1-percenters can be spot-on; look no further than the global financial crisis of 2008, which was brought on by too much deregulation and unsound safeguarding by the state.

What appears to be perplexing about the electoral success of the strongmen is that few of their supporters actually believe their proposed policy ideas will help make their lives better. They share the oft-repeated grievances, the feeling of neglect, the perceived slights by proverbial liberal elites, the assumption that immigrants and minorities have been moved ahead of them to the top of the queue – a version of this story is told in the United States, the United Kingdom, Germany and elsewhere.

The proposed countermeasures, if there are any, like walls, mass deportation or no-deal Brexit, are too expensive, impractical or sometimes even counterproductive.

And yet today’s autocratic appeal, following Wolfgang Fach’s theory, lies not in the actual substance, and not even in symbolic meaning – that is, “owning the libs” or any other right-wing armchair battle cry.

In 2018, the historical anthropologist Thomas Bauer published a short yet weighty essay on the loss of ambiguity and diversity, The Disambiguation of the World. He traces the story of how modern societies lost their will and their ability to handle or even tolerate pluralist meanings from religion to the arts and politics. “In many areas of life, the most attractive spiritual offerings are those promising release from the unnavigable ambiguity of the world.” Bauer notes all the impersonal factors for this tendency: bureaucratization, technical advancements, mass-market consumer culture. But he also sees an express will of people to live in a more conclusive world.

Translated back into the world of democratic politics, it becomes clearer why a growing segment of the electorate in Western societies chooses to deny or obfuscate the science of climate change, the fact that minorities still face discrimination or that a strong government must level the playing field of the so-called open market in myriad ways.

In other words, what’s needed is the normal, untidy and always tentative business of democracy. Democratic decision-making cannot claim to embody the sole truth – such a claim would be counterintuitive to the essence of its undertaking. It is a series of temporary fixes, good only for as long as a new – and hopefully better – solution doesn’t come along.

“Compromise is not a sign of the collapse of one’s moral conscience. It is a sign of its strength, for there is nothing more necessary to a moral conscience than the recognition that other people have one, too,” writes Adam Gopnik. “A compromise is a knot tied tight between competing decencies.”

On the face of it, this version of democracy will always be less sexy than the siren songs of the strongman. In the struggle for democracy – one might say the idea of the republic – there is no reverse-engineering the transcendent act of turning politics into POLITICS. Democracy’s advocates – politicians, voters and citizens – can only engage in the conciliatory manner that has been lying at the core of the concept since its inception. 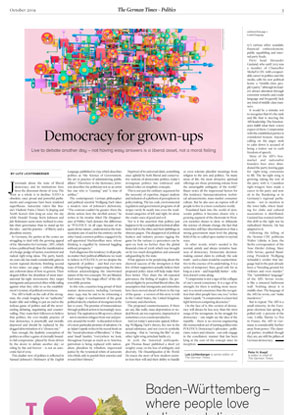