On its 70th anniversary, the North Atlantic Treaty Organization is doing fairly well as the most successful security alliance in modern history. Through constant evolution and adaptation, NATO has managed to preserve its relevance for both sides of the Atlantic, each a fundamentally unique security environment. In the long term, however, NATO faces an almost existential problem, as it will be difficult to maintain its significance for the United States as the dominant power within the Alliance. This will have less to do with the erratic policy of its current president, Donald Trump, and more to do with America’s geostrategic reorientation away from Russia and towards China. Recalibrating its geostrategic compass is a must if the Alliance is to remain relevant.

With Moscow’s illegal annexation of Crimea in 2014, NATO found itself back in “Article 5 world” – a security environment where Alliance commitments must be bolstered by a credible deterrence and defense posture. NATO adapted swiftly to the new requirements; indeed, more quickly than Vladimir Putin had expected when he launched his war against Ukraine.

Since 2014, NATO has profoundly improved its readiness for territorial defense on many fronts. The NATO Response Force (NRF), created in 2002, has been tripled to comprise a joint force of some 40,000 troops. Its readiness has been improved through the 5,000 multinational troops constituting the Very High Readiness Joint Task Force (VJTF). Under its abridgement called Enhanced Forward Presence (EFP), four combat-ready battle groups have been operational since 2017 in Estonia, Latvia, Lithuania and Poland. Moreover, NATO has vastly intensified the number and size of its multinational exercises while developing new defense plans. Even nuclear deterrence, a posture still contested by citizen groups in some NATO countries, has undergone meaningful augmentation.

It goes without saying that NATO’s success over the last seven decades has relied heavily on the US as the ultimate provider of security for the European allies. It should be noted that US commitments have been maintained since the tidal change of 2014 and, more importantly, since 2017, when President Trump took office.

Such a positive description of America’s role in NATO may surprise those who cite the fact that Washington is afflicted with a president that openly detests NATO and misses no occasion to express his disrespect for alliances and allies. On closer look, however, Trump’s morning tweets against America’s international commitments speak more to the president’s ignorance in international politics than to his country’s flagging engagement within NATO. Indeed, since Donald Trump assumed office, US NATO commitments in Eastern Europe have actually increased.

Since 2014, the US has increased the emergency response support for Eastern Europe – the European Deterrence Initiative (EDI) – from $1 billion to $6.5 billion in 2019. Furthermore, the US has strengthened the “Eastern front” through rotational deployments of combat brigades, the pre-deployment of weapons and ammunition, the modernization of airfields and the enhancement of naval capabilities in the north, particularly vis-à-vis anti-submarine warfare.

The recent resignation of Secretary of Defense James N. Mattis as the guardian of America’s trans-Atlantic focus stirred fears that US support for NATO could dwindle. Yet, these concerns underestimate the ironclad, bipartisan congressional support for NATO in Washington, which keeps the president from realizing his isolationist impulses, at least with respect to the Alliance.

On the financial side, Congress always links the appropriation of defense spending to America’s engagement in NATO. While this cannot keep the president from unexpectedly withdrawing US troops from the Middle East or Afghanistan, it prevents him from taking a wrecking ball to Europe’s web of security institutions. Despite concerns about the future course of the Trump administration, NATO is now significantly stronger than it was five years ago. Still, NATO and the American engagement in Europe faces  one major challenge, which is rooted less in the digressions of the current US president and more in a fundamental shift in the international distribution of power and in America’s changing worldview.

Washington’s political and military support for NATO is largely based on American concerns vis-à vis Moscow. Russia is perceived as a revisionist power ready to break international law to pursue its own great-power ambitions. Lacking the resources to mount a frontal challenge to the US, Russia uses the entire range of statecraft – including disinformation campaigns, cyberattacks and interference in foreign elections – to operate against what it perceives as the “great enemy” in the West.

At the same time, there is a broad perception among US political elites that Russia is a power in decline. The country missed decades of political, economic and societal modernization, leaving it incapable of actually becoming the major international player it claims to be. Russia has a GDP significantly smaller than that of Italy and has only two competitive products on the world market – energy and weapons. While Russia will always pose a threat to the US, it will become less and less able to shape international politics on a grand scale.

China, in contrast, is perceived as a rising power undergoing breathtaking economic development, which increasingly correlates to military capabilities. Hence, China is on its way to becoming the true peer of Washington, challenging the US role not only in the Pacific but also in the international order of things. If Russia is no longer perceived as a global strategic challenge, but as a regional problem that can be hedged with limited means, Europe will then gradually lose its relevance to the US. In five or ten years, Washington could come to the conclusion that a number of wellequipped US combat brigades stationed on a bilateral basis in Eastern Europe, plus some maritime capabilities in the High North, should suffice to blunt potential Russian aggression against its neighbors. The US would no longer see NATO as critical to its interests, with the possible exception of those European allies in close proximity to Russia’s borders.

NATO could become an empty shell, depending on how swiftly and profoundly the “decline scenario” would play out. Washington could engage bilaterally with those European allies it deems relevant without having to struggle with the consensus-driven institution comprising 29 member states. It might also be tempting for the US to redirect its resources previously used in Europe to the Asia-Pacific region in order to cope with the rise of China as its true challenger in global dominance.

In the event of a burgeoning Sino-American bilateralism, NATO could preserve its relevance to the US only if it can contribute to hedging China’s global ambitions and keeping Beijing from replacing the current order through its own concepts of international relations. A NATO able to contribute to deterring China would not only be beneficial to the US but also to the European allies. One means to realizing this would involve a greater European readiness for military burden-sharing with respect to Asia. If the US remains the only NATO member with significant power projection capabilities in Asia, the Europeans will have to show more military willingness in their neighborhood in order to free up US military capabilities in areas beyond the reach of most NATO allies.

Many Alliance members may consider it unlikely that NATO would ever expand its portfolio as far east as the Asia-Pacific region. However, fundamental political changes require fundamentally new approaches – not too far from now, another adaptation of the Alliance to a new security environment may become inevitable.

A version of this article appears in print on Feb. 15, 2019, on Page 7 of The Security Times with the headline: NATO – unfazed by morning tweets

Karl-Heinz Kamp
is president of the Federal Academy for Security Policy in Berlin. This article reflects the author’s personal opinions. 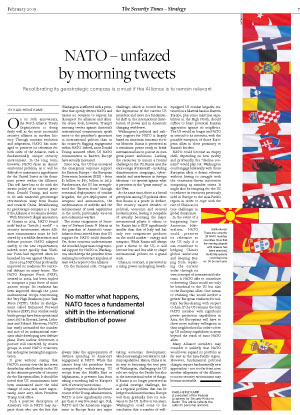