Journalist Juan Moreno never actually met Claas Relotius. They spoke on the phone only once, and Moreno believes this is one of the reasons he was able to eventually expose Relotius’ many journalistic fabrications. Everyone else at the Der Spiegel seems to have fallen for the charms of the award-winning Relotius, a four-time recipient of the prestigious German Reporter Prize. Relotius had been awarded several other prominent prizes, even though the 33-year-old had worked as an intern and freelancer until only a few years ago.

The whole thing started a couple of years ago when Moreno read a Relotius’ story on what was supposedly the first tax consultant in Cuba, a man who advised shoe shiners. Could that be? Moreno kept his doubts to himself. Soon thereafter, Der Spiegel asked him to co-author an article with Relotius about groups of Central American refugees approaching the United States. He ended up researching the piece from the perspective of the refugees, while Relotius took the position of an Arizona-based vigilante border militia seeking to keep out the intruders.

When Moreno expressed doubts about Relotius’ work to his superiors, he was not taken seriously and told to back off. Moreno then looked into the matter in secret and discovered that Relotius had never met his protagonists and had invented parts of their biographies. Moreno then examined earlier texts and found more fabrications. When Relotius was confronted with this evidence, he simply forged further evidence to prove his story.

Der Spiegel broke the story last December and has since been busy explaining which aspects of the 60 articles Relotius wrote over the course of seven years are fictional. Similar fabrications were found at other newspapers and magazines Relotius wrote for. Der Spiegel has consistently boasted that its rigorous fact-checking process makes it particularly credible, which makes it all the more unsettling to see how easily Relotius was able to hoodwink the magazine’s editorial staff – not to mention the entire industry.

The scandal leaves a large stain on the reputation of Der Spiegel, a leading force in German journalism since 1947. The magazine held a position in Europe comparable to that of The New York Times in the US. Today, at a time when established media outlets fear for their credibility, Relotius’ lies provide critics with a welcome opportunity to question the leading role of mainstream media.

Two years ago, Der Spiegel celebrated itself as a pillar of democracy, reminding the public that it had emerged stronger from its greatest crisis back in 1962, when founder Rudolf Augstein was imprisoned on treason charges and many Germans took to the streets to protest for his release. At that time, the magazine’s circulation skyrocketed, and Augstein’s “Telling it like it is” became its famous mission statement. A plaque with that phrase still hangs in the lobby of the magazine’s Hamburg offices. But does the aphorism still ring true?

Why didn’t Relotius’ lies attract attention before? How is it possible that the jury of the Reporter Prize actually praised his transparent approach to the job? Those same jury members now own up to a profound sense of shame yet point out that it was Der Spiegel’s job to check the facts.

A Relotius report from Fergus Falls, Minnesota, elucidating Donald Trump’s election victory makes the much-praised Der Spiegel in-house fact-checking look particularly bad: Again, how is it possible that not one of the more than 60 fact-checkers noticed that the distances, landscape descriptions and percentage of Trump voters were incorrect? They failed to notice that Relotius had no evidence for many of his claims, including that there was a sign at the entrance to town banning Mexicans from entering.

Relotius later told his colleagues that his fabrications were the result of the pressure he felt to repeatedly deliver top-notch reports, even though Der Spiegel gave him several weeks to do research in Fergus Falls. In the time since the scandal broke, a colleague traveled back to the site to apologize to the people there. Hans Leyendecker, himself once a reporter for Der Spiegel and now a respected writer for the Munich-based Süddeutsche Zeitung, called journalists like Relotius “damn privileged. […] In my opinion, someone like Relotius has no idea what pressure even means.”

US Ambassador Richard Grenell expressed that “we are concerned these narratives are pushed by Spiegel’s senior leadership and that reporters are responding to what the leadership wants.” In other words, he sees the forgeries as not the unpleasant act of one individual, but “fake news” ordered from above. The ambassador insisted that “a thorough investigation be conducted by an outside, independent organization to determine exactly how Spiegel violated journalistic standards and how it can reform internal processes.”

This demand for external clarification is justified, but it would be taken more seriously if it weren’t coming from a diplomat looking to prevent critical reporting of his president. In response to Grenell, Der Spiegel noted that criticism of the president did not constitute anti-Americanism, but rather criticism of his policies.

Steffen Klusmann, who took over as editor-in-chief of the magazine in January, said the scandal “has shaken us all to the core. We have high standards when it comes to the credibility of the Der Spiegel brand. We have to get our credibility back.” Klusmann added that he and his colleagues are going to have “work through this in such a way that leaves as little room for skepticism as possible.” Der Spiegel admitted: “The system failed.” But is this enough to explain what happened? Why did the system fail? How can it be improved?

In response to criticism that Der Spiegel covered its own fabrication scandal in the style of an exciting news item, Klusmann said: “This approach is entirely appropriate when exposing a reporter who falsifies stories,” adding: “We’re not looking to win the next prize for it.”

And what about Relotius? He returned his prizes and recently called into a radio program, acting as if he wanted to explain himself to the public. But when one of his former bosses joined the live interview, he hung up. The boss then pointed out that the caller had not, in fact, been Relotius. Apparently, a fake journalist had hoped to impersonate the real fake journalist. 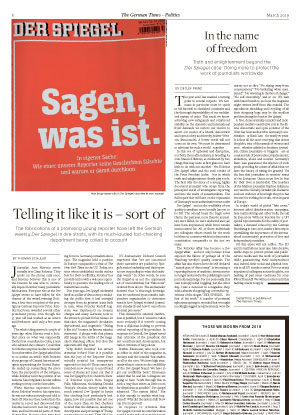