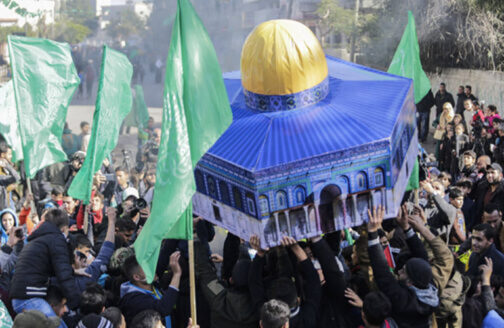 Religious hatred often begins in schools as seen most recently in the recent escalation of the Middle East conflict. This dangerous dimension has long been ignored, also by the EU.

One has to take a closer look, specifically at what is being taught to children and young people. A sad example from recent years is that Palestinian Authority textbooks encourage violence against Israelis and include antisemitic messages, this is according to an unpublished report commissioned by the European Union in 2019 and obtained by The Jerusalem Post. After being kept under wraps for weeks, the EU study that was supposed to investigate the extent of Jew-hatred and calls for violence in Palestinian schoolbooks was surprisingly published last week.

The piquant thing about it: Brussels directly funds the salaries of Palestinian teachers and the publishers of these textbooks, which, the report indicates, encourage and glorify violence against Israelis and Jews. It has been found that textbooks in Turkey and Qatar, also have such content, which encourages hatred and religious motivated extremism.

After the recent escalation of the Middle East conflict, a nationwide “week of solidarity for Palestine” was initiated in Tunisian schools. Unfortunately, it was not an educational approach that provided balanced information about this conflict, but rather a propagandistic one that did not exactly contribute to further coexistence with other religions and cultures, considering that Tunisia still has one of the largest Jewish minorities in the Arab world. And these biased narratives about the Middle East conflict are also spilling over into Europe.

At a recent online debate organised by the Institute for Religious Freedom and Security in Europe (IFFSE) initiated by the Conference of European Rabbis (CER), one of the questions raised was what can be done about it. Moderated by the prestigious security expert Peter Neumann, from King’s College London, the President of the Conference of European Rabbis (CER), Moscow’s Chief Rabbi Pinchas Goldschmidt, spoke of a great shadow cast on Europe by religious hatred that is dangerous for society as a whole.

Marcus Sheff, CEO of impact-SE, an organisation that analyses schoolbooks and curricula for compliance with UNESCO-defined standards on peace and tolerance, underlined the power that textbooks hold. “They can serve to either increase the tolerance or intolerance of societies”. He looks with great concern at the Middle East region, especially at the Palestinian territories. “School books there are a blueprint for radicalisation and extremism”, he warned. Values to be taught such as moderation, tolerance and peace-making are completely absent from these textbooks. Even though there has been progress in the curricula in the region and these values are being taken up by some countries, such as Saudi Arabia, there are still negative examples, Sheff underlined. In Turkey for instance, under President Erdogan, a radicalisation of the curriculum is taking place in which jihad is glorified in schools and an aggressive neo-Ottomanism is taught as a central value. Iranian textbooks call for the demonisation of Jews and Israel and convey Iran’s hegemonic claim in the region.

Monika Hohlmeier, member of the European Parliament and former special rapporteur of the Committee on Terrorism, condemned the Palestinian Authority’s failure to act against incitement in textbooks and insisted that educators receiving EU-funds abide by UNESCO standards against hate. She called on the EU’s executive body to ensure funds promote peace and tolerance in schools. “It has to be ensured that all third entities only use Union funds to provide for textbooks and teaching material that reflect common values and fully comply with UNESCO standards promoting peace, tolerance and co-existence in school education.”

In general, the issue of hate in the educational sector continues to be underestimated. It requires an urgent change of course across the education sector and more engagement.

Peter Rosengard, who founded and chairs Since 9/11, a UK charity which teaches students about the events, causes, and consequences of 9/11, demanded that teaching tolerance and harmony, respect and peaceful coexistence should be the basis of any curriculum. “Just as we are currently vaccinating the world against Covid-19, we must also vaccinate the world against hatred”, he said.

“The most important goal of school education must be to convey a sense of complexity to reconquer lost territories in schools”, the Vice-President of the umbrella organisation of Jewish organisations in France (CRIF), Yonathan Arfi pointed out. This also applies to current topics such as the Middle East conflict.

“Education is a crucial key, because everything in life is shaped by the impressions and experiences one gathers as a child”, Chief Rabbi Goldschmidt said. “At the same time, it must be ensured that religious education does not hurt any child, but takes other faiths into account”. The President of the Conference of European Rabbis called also for a better education of religious leaders. “Hate and false narratives increase the danger of growing extremism and terrorism. Therefore, not only students but also religious leaders must be taught the fundamental principles and values of Europe”, he underlined.

Mirco Keilberth
is a journalist and North Africa correspondent. He has been reporting from Libya, Tunisia and the Maghreb region since 2011.