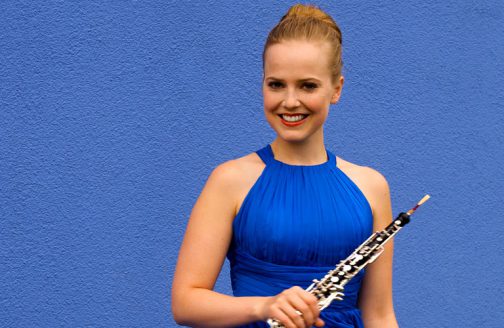 One of the most successful concepts in classical music is turning 20 this year. Back in 2000, the youth orchestra festival known as the Young Euro Classic (YEC) took place for the first time ever in Berlin. From that first year onwards, the YEC team under Gabriele Minz was able to fill the Konzerthaus am Gendarmenmarkt to the brim almost every evening – with performances by well-known German and international youth orchestras, but also by lesser-known regional ensembles. The festival takes place each year in the final weeks of Berlin’s official theater holidays, which means it profits from having fewer cultural events to compete with as well as from the sheer charisma of the youth orchestras themselves. Far from the service-oriented mentality of some professional orchestras, these young musicians inevitably play with a special intensity and give audiences hope that this youthful elan will be preserved in the future. The suggestive slogan of the Young Euro Classic is “Hier spielt die Zukunft,” which can be loosely translated as “This is where the future plays.”

But what does that future actually look like? In other words, what happens to young musicians after they’ve performed at Young Euro Classic? If one is looking to portray the festival’s success at promoting young talent, then oboist Viola Wilmsen is the poster child. After winning competitions for her trumpet playing and also displaying her talent for piano and vocals, Wilmsen chose to study the oboe in Lübeck and later in Paris and Berlin. While still in secondary school, she played in the German National Youth Orchestra, and later, while at university, in the Junge Deutsche Philharmonie. As part of the orchestra’s participation in the YEC starting in 2004, Wilmsen held the position of solo oboist. In 2010, she became solo oboist in the orchestra of Berlin’s Deutsche Oper, and three years later she was named solo oboist at the Deutsches Symphonie-Orchester, one of Germany’s best. For many musicians, this would be enough of a career and plenty to keep them busy; but Wilmsen also performs regularly as a soloist in oboe concerts, plays chamber music in several ensembles and has even recorded CDs with them.

When asked to what extent Young Euro Classic contributed to her success, Wilmsen

describes a more indirect impact: “Participating in the YEC has a mostly indirect effect on players,” she argues. “I think what’s most important is the sense of achievement and positive feedback one gets from conductors in youth orchestras. That’s what gave me strength and motivated me on my path to becoming a professional musician.” As she notes further, the pressure and excitement of performing at the Konzerthaus in Berlin and in a series with other youth orchestras acted as an “incentive to be especially well-prepared and to give absolutely everything in every concert.”

Youth orchestras indeed gain motivation by performing in famous concert halls, but most of all they benefit from the experience of working with established conductors. Students studying orchestra conducting can also learn a lot, for example, by working as assistants. Up-and-coming conductor Kerem Hasan, who was born in London in 1992, accompanied the European Union Youth Orchestra (EUYO) on its tours starting in 2012, and also played in Berlin. At the time, he was studying piano and conducting in Glasgow and played piano in the orchestra, but mostly he worked as an assistant to conductors Dirk Brossé, Krzystof Urbański and Thomas Søndergård. His work as an assistant involved such tasks as checking the tonal balance of the instruments and rehearsing works with individual orchestra groups.

Although a young conductor can learn a lot by engaging in such work, it won’t make him famous. According to Hasan, Young Euro Classic was less important for his career than his work with the EUYO, with whom he also rehearsed independently starting in 2014. Ultimately, what was most decisive were his achievements at various competitions: after pursuing his studies further in Weimar and Zurich, Hasan was a finalist in 2016 at the Donatella Flick Conducting Competition in London and was named associate conductor of the Welsh National Opera. As a winner of the renowned Young Conductors Award at the Salzburger Festspiele, he was also appointed to the position of principal conductor of the Tiroler Symphonieorchester Innsbruck. But Hasan will only take up that position starting in the fall, because for the current season, he is still studying as an assistant under Bernard Haitink in Chicago and Amsterdam.

The Young Euro Classic most likely exerts its strongest promotional impact on behalf of composers, rather than for young orchestra members. Almost all youth orchestras perform a new work by a composer from their home country, which then competes with others for the European Composers Prize decided by a public jury. In 2015, the National Youth Symphony Orchestra of Turkey presented the work “Hafriyat – Earthwork” by the then- 30-year-old composer Sinem Altan. Of the three musicians presented here, she is the only one who mentions the Young Euro Classic on her CV. This speaks volumes on the varying importance of participation in the YEC.

It should be noted that Sinem Altan was already well-known before she got involved in the Young Euro Classic. In her home country of Turkey, her talents were noticed and fostered as a young girl and she came to Berlin at the age of 11 to study piano and composition at the Hochschule für Musik. At the age of 23, she wrote the first of now four works for Berlin’s Neuköllner Oper, and one year later she oversaw family concerts with intercultural undertones at the Rundfunk-Sinfonieorchester Berlin, for which she also composed several musical dramatic works. Fostering dialogue between German and Turkish culture is the idea behind her chamber music ensemble Olivinn; for example, they perform Schubert’s “Winterreise” using Turkish instruments. Her work also involves a tangible turn toward the public, and she is currently working as the musical director of the Gorki Theater in Berlin. So, as important as it was for her to win the European Composers Award – previous recipients include Magnus Lindberg, Niels Klein and Agata Zubel – Sinem Altan’s schedule of engagements was already full before she received the composers’ prize.

In other words, the benefits of taking part in Young Euro Classic remain relatively minimal for individual musicians. Viola Wilmsen notes that the event fails to support the networking of musicians from different orchestras and cultures. Still, the competitive nature of the festival has prompted the youth orchestras to reach breathtaking heights of musical quality; for example, Stravinsky’s “Sacre du Printemps,” which required tremendous effort to play 100 years ago, is now easily mastered by regional youth orchestras. Indeed, modern music education plays a decisive role in the upswing in performance and quality, and the developments fostered by the Young Euro Classic also serve to inspire individual musicians to reach new heights.

Peter Uehling
is a music critic for the daily Berliner Zeitung. 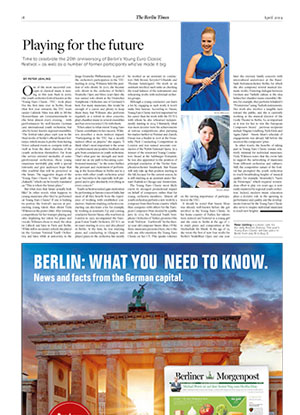