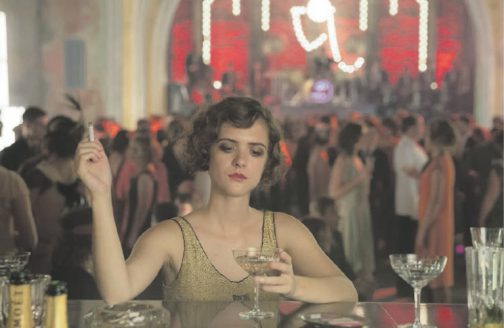 No one evades the undertow of ecstasy, nor the vortex of doom. As the first double-episode of Babylon Berlin comes to a close and the denizens of a packed nightclub throb to the music, entranced and infatuated by the androgynous charm of the Russian performer on stage, elsewhere in the city Stalin’s henchmen unload their Gatling guns on an underground band of Trotskyite dreamers. A lady of the night finds her John; confetti litters the air; bodies fall in a flurry of gunfire. The singer lowers her mask, banana-skirted dancers contort their bodies à la Josephine Baker and a love-struck youth looks on in awe.

Everything spins, everything happens at once and everything relates to everything else: the glamorous and the gruesome, lust for life and fear of death, desire and pain, the lives of the little people and the global political order. The images in the final sequence are cut to the rhythm of the music, forming a wide shot in the mind’s eye: Such is Babylon Berlin, the capital of the German Reich in the year 1929, six years after the hyper-inflation of the early Weimar Republic, and four years before Hitler comes to power. We find ourselves at the peak of the Roar­ing Twenties, a year in which the Worker’s Revolt meets its bloody suppression, Alfred Döblin pens his Berlin Alexanderplatz and Bertolt Brecht delivers the trium­phant Threepenny Opera.

Lead director Tom Tykwer (Run Lola Run; Sense 8), who also co-created the series with Achim von Borries and Henk Handloegten, claims he is trying to hurl his audience into a time machine. The mammoth project shot at 300 locations for 185 shooting days with over 5000 extras in just two seasons, on a budget of (gulp) €40 million. To make it all happen, the fee-financed public television station ARD first had to join forces with the subscription channel Sky. The most expensive German series of all time is seeking to step out of the provinciality of German TV and onto the world stage without betraying its roots in European culture. It wants to speak to both a domestic and a global audience, fans who for almost 50 years have religiously watched the successful crime series Tatort as well the devotees of The Sopranos and Game of Thrones.

And why not? Is Germany not the country that – in the era in which Babylon Berlin is set – produced films like Metropolis? Nazi propaganda films and the repressive kitsch of post-war cinema would later teach Germans a healthy skepticism of the seductive power of imagery. The medium became rather prosaic, often a bit superficial and never experimental. Toeing the line was the order of the day. Epic television was dedicated to the Middle Ages, the present, the division of Germany or the catastrophe of the Third Reich. In terms of the latter, Philipp Kadelbach’s 2013 World War II drama Unsere Mütter, unsere Väter (Our mothers, our fathers) tried, at last, to cultivate a complexity and cinematic language that critics compared to Band of Brothers.

But looking back at the 1920s is something new. Babylon Berlin is now venturing such a feat – it first ran on Sky in 2017, and now currently on ARD – finding large audiences and already drowning in awards. This is a symptom of something darker, as were a series of recent exhibitions on the art of the era. For Germans, the splendor and misery of the first German democracy seem closer at hand than they were just a few years ago, when trust in the post-war order was unshakable. This order is crumbling before our eyes; the trans-Atlantic axis is creaking; Europe is struggling for cohesion; the refugee crisis and the fear of radicalized Islam is dividing society; the established parties are faltering and right-wing populists are gaining momentum. Germany is inching closer to “Weimar conditions.” But a series like Babylon Berlin is a sensuously shuddering glance into a distant mirror.

Two main characters stare back at us from the panorama, each conflicted, morally suspect yet likeable, and each portrayed by outstanding actors. Volker Bruch is the Great War veteran Gereon Rath. The commissioner of the homicide division comes to the capital from Cologne. He is concealing a secret mission as well as his love life and a morphine addiction. Only drugs can quell his would-be disqualifying tremors that he and many other soldiers brought home from the trenches. At his side, played by Liv Lisa Fries, is the young Charlotte Richter, a modern girl and a product of Berlin’s grim working-class districts. By day she’s a stenotypist at the Alex, Berlin’s infamous police headquarters. By night she’s a prostitute, who dreams of a career as criminal investigator. And then a character – straight out of Döblin – that figures in the fate of each our stars: the weighty, warmhearted yet brutal Bruno Wolter (Peter Kurth), who passes himself off as something like a fatherly friend.

A political sex scandal provides but a succulent introductory segue to the main events that will ensnarl the main characters: a bloody massacre and a conspiracy involving a freight train from Russia. Poison gas, bounteous amounts of gold and the ambitions of the “Black Reichswehr,” a group of generals out to restore the Kaiser to his throne – these are just a few of the factors our stars face in season one. Season two features the specter of communists and brownshirts marching the streets, as a pincer move­ment of right- and left-wing enemies of democracy threatens to take down history’s actual Foreign Minister Gustav Stresemann and the fictitious, Jewish Deputy Police Commissioner August Brenda.

Babylon Berlin is no history lesson. It is an adaptation of Volker Kutscher’s novel Der nasse Fisch (The Wet Fish) with a slew of historical details thrown in a manner somewhat lacking in academic rigor, but the broad strokes of history more or less hit the mark. And Tom Tykwer exploits certain of his talents that have brought him success in the past: his use of kaleidoscopic imagery, his expertise at combining the fates of many individuals into one dynamic narrative whole and his inimitable sense of tempo and timing. It’s no matter that the plot is sometimes overwrought – what a ride! We have love, sex, syphilis, crime, the state, and we’re just getting started; a woman dies but lives on, a tattooed priest of the underworld and an Armenian stir up trouble. The series does not economize on violence, gruesome corpses or gross improbabilities, yet it invokes, indeed flawlessly, the classics of the era of silent film. Its greatest success, however, stems from its atmospheric depth. If you’ve seen even three episodes, you need only hear the menacing brass section in the intro to become fully submerged in Babylon Berlin. 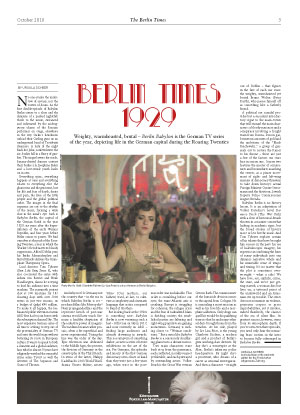