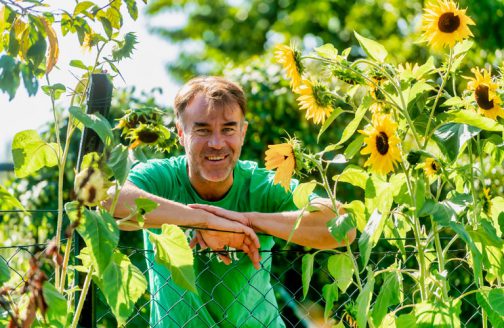 For seven long years, there was nothing I feared more than the annual inspections carried out by members of the Schöneberg-Friedenau Association of Allotment Gardeners. As far as I’m concerned, these inspectors are nothing more than a terror squad masquerading as two seasoned garden pros who summer after summer are intent on examining every corner of our 240-square-meter lot in the Tulpenteich garden colony in southern Berlin. Although the inspections seem designed to intimidate and drive fear into our hearts, their ostensible aim is to determine whether our use of the allotment plot is in keeping with the regulations contained in the Bundeskleingartengesetz (Federal Allotment Garden Act or BKleingG). According to that law, for example, at least 10 percent of the plot’s surface area must be planted with vegetables or fruit.

Indeed, German law and order stipulates that an allotment garden – known as a Datsche, Schrebergarten or Laube – is not to be used simply for recreational purposes. No, owners must maintain the correct distance of plants from fences and even replant the vegetation in a different spot, if necessary. Vegetable cultivation is highly encouraged, and the area covered by any kind of roofed structure must be limited to 24 m2 – or risk being in violation of protocol guidelines, which the garden inspectors stick to like glue.

Oddly, the inspectors are not at all interested in whether you’ve cleared a new bed for zucchini or planted a peach tree. But they always find some reason or another to complain, which is why for the longest time I thought the inspection was nothing more than a disciplinary measure designed to keep us hobby gardeners who happened to be academics on a short leash – and to school us in Prussian virtues.

In fact, most of my life I’ve been convinced that allotment gardens exist for the sole purpose of maintaining some kind of folkish-German cohesion. No matter whether in the West German town of Bottrop, deep in the old Federal Republic, or in the former GDR town of Cottbus along the Polish border: those black-red-and-gold German flags – an often arresting sight in this country where patriotism is still taboo – tend to blow in abundance over the green garden colonies there. In the 1980s, one might have occasionally even seen an imperial war flag from the era of the German Empire. To this day, some allotments carry the names of one-time colonies: Burenland, Samoa and Kamerun can still be found adjacent to associations with names like Wiedervereinigung (reunification) and Einigkeit (unity), which express the yearning of West Germans for unification with those “eastern states” temporarily lost to the communists in the era before the Wall came down. The fact that the National Socialists’ virulently anti-Semitic racial guidelines were extended to cover German allotment gardens three years after the passing of the Nuremberg Laws always seemed to me to be consistent with the nationalist-leaning background of these green spaces. In March 1938, in the Reichstag in Berlin, representatives of the Nazi party determined that “only honorable comrades of German blood or similar descent may become allotment gardeners.”

Fortunately, eight decades later, there are now also Turkish flags flying over Germany’s allotment gardens. One of the neighbors at our southern Berlin garden has a smiling seal on a blue background; three plots over, the flag of the Kingdom of Bavaria billows above the green. There are more than one million allotment plots between the Alps and the North Sea and the Oder and the Rhine. Most of them are in larger cities, where greenery close to one’s own home is hard to come by – that is, where the longing for untouched nature is all the greater.

The first allotment gardens in Germany were created in 1865, when they were referred to as Armengärten, or gardens for the poor. The idea was to make it possible for disadvantaged citizens to meet their own needs for fruits and vegetables. Today, in Berlin alone, there are more than 60,000 plots that provide their owners with a beloved weekend destination, and thus a break from the gray monotony of the city. This large number of personal plots is the result of an initial boom to the gardening movement that came about at the end of the 19th century, as the German capital found itself on the path to becoming a leading industrial center.

Despite these open-minded beginnings, I was not expecting to find any progressive forces at work on that frosty winter morning when my wife – with our baby in tow – submitted our application for one of the coveted plots. Our ultimate aim was to be able to offer our young children something more than just bleak inner-city playgrounds. That day marked our fateful step into the realm of evidently petit-bourgeois philistines. The sullen inspectors from the allotment garden management board who made their annual summer rounds were living proof of what we had gotten ourselves into.

As far as I was concerned, the peak of petit-bourgeois pickiness was to be found in the bureaucratic stipulation that all hedges be pruned to exactly 1.25 meters. “Is this really the way it has to be?” I asked myself every year as the garden inspection drew closer. When we took on our plot at the beginning of the 2010s, it already featured a hedge consisting of Thuja trees along one side, and this hedge was nothing less than an abomination. It was crooked and wonky, full of brown spots and without any ecological value whatsoever. But then came the moment three years ago when I finally bought an electric hedge trimmer. After several laborious summers trimming it by hand and refusing to spare my family our misery by simply clearing it away once and for all, the trimmer transformed me into a gardening master. In the space of thirty minutes, I was able to cut what otherwise would have taken me six hours. Thanks to the Bosch AHS 50-26, my self-empowerment as a gardener had begun. I was suddenly convinced that I could keep up with those gardening pros and their green thumbs, clear-cut beds and perfectly manicured lawns that somehow always looked like golf courses.

I realized quite quickly that loud and manly machines, such as shredders, hedge trimmers and lawnmowers, would not be enough to win me acceptance into the established caste of allotment garden masters. In spite of its exemplary height, the ugly hedge remained a visual disgrace, and it also blocked the view to our Polish neighbor to the north of our garden. As he and I had exchanged no more than seven sentences over the course of seven years, it took me some time just to remember his name. In our case, there was no allotment-garden team spirit to speak of; on the contrary, it was as if the Iron Curtain had never fallen, and that ugly hedge had continued to stand between Oleg and me for years.

I’m not exactly sure why this long overdue insight prompted me to finally take action on a wet and cold winter morning this past February. But it did. I grabbed my saw and shovel and set about demolishing the 16 Thuja tree trunks along the fence with my own hands. As I worked, the pile of discarded shrubbery, roots and needles grew larger and larger, and the 12-meter strip along our two properties became more and more bare. I ultimately ended up bringing a total of six minibus loads of undergrowth to the Berlin dump. The only thing that remained along the border was the earth in the ground. When it was done, I was electrified. I felt that I finally understood a phrase often attributed to Karl Marx: “To be radical is to grasp things by the root.”

But I still had a guilty conscience. I had actually wanted to inform Oleg in advance about my radical pruning plans, but there had been no sign of him for days. In contrast to the summer months, when family parties and children’s birthdays make for full colonies, people often don’t visit in the winter months. He just never showed up, even as the hedge that separated us shrank meter by meter every day.

Why did I care? Well, not every gardener enjoys it when his neighbors have a direct view into their small paradise, and there are good reasons for those hedges and fences that serve as boundaries between the lots. In fact, legal battles over German fences are legendary, and some communities have even broken down over protruding branches.

On the fourth day of my personal clear-cutting mission, Oleg finally appeared. “It’s much nicer without the hedge!” he said. “This way, we can finally have a conversation.” I breathed a sigh of relief and we clinked glasses of anise schnapps from the home country of my in-laws.

Incidentally, our garden neighbor to the west is also a big fan of schnapps. He’s a bricklayer, a born-and-bred Berliner who grew up in Kreuzberg when the Wall still divided the city. There was never any kind of hedge separating our two allotment plots. At most, the things that divided us were our dissimilar income levels and our differing taste in music – these are the things one notices quickly on those warm summer nights. But I saw this, too, as an exercise in tolerance.

Last July, after surviving the first garden inspection since removing the dreaded hedge, my western neighbor and I shared a Pernod-cola in celebration. And pretty soon, when I harvest my first self-grown potatoes in the fall, I’m going to ask Oleg to show me how to turn them into vodka. And when that special day comes, maybe he and I will drink a toast in honor of the 30th anniversary of the fall of the Berlin Wall in November 1989. Of course, we’ll raise our glasses across the flower bed where – up until very recently – the Thuja hedge stood. 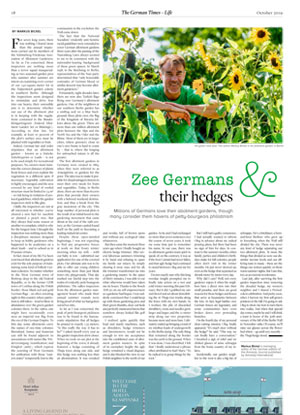