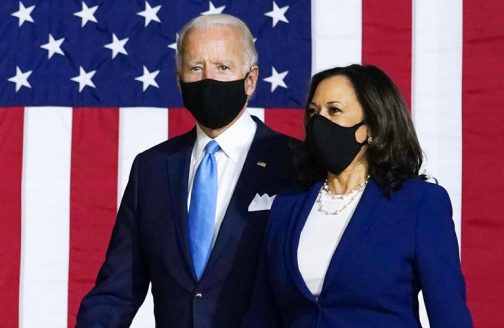 In most corners of the world, hopes are running high that Joe Biden and Kamala Harris will win the upcoming US election and thus bring to a close this current dark chapter. These hopes, however, rest on less-than-sound footing, and for several reasons. The unrest in American cities, the possibility of a vaccine being introduced in advance of the election, a rebound in the US economy and, last but not least, Biden’s personal performance as the oldest presidential candidate in US history pose a number of imponderables. The polling gurus lost much of their credibility after having erroneously forecast Hillary Clinton’s electoral victory four years ago.

November 2020 will mark 51 years since Joe Biden won office for the first time. In 1969, the 27-year-old was elected to the New Castle County Council in the state of Delaware. Two years later, he won one of his state’s two seats in the US Senate. How much of a fresh start can be expected from someone who’s practiced politics for over a half century?

In terms of foreign policy, the answer is simple. Should Biden and Harris win, the need for innovation will be minimal; a simple rollback of their predecessors’ poor decisions and an official end to the “America First” policy would suffice. Immediately upon taking office on Jan. 20, 2021, they would begin re-integrating the US into the international community by returning to commitments, for example, with treaties on climate protection (Paris) and arms control (“Open Skies”). As the COVID-19 pandemic will certainly still be among us, they would be sure to rejoin the World Health Organization. They would also be sure to demonstrate the end of Trumpism and underscore the importance of alliances by traveling to their country’s bewildered allies in Europe and working to restore the trans-Atlantic relationship.

Just as Biden will seek to “heal” and reunite his country, he will also seek to straighten out relations with US allies. This would involve, for starters, a radical shift in diplomatic tone. One can assume that a Biden administration will select its ambassadors using a different set of criteria than applied by the Trump administration. For example, Berlin and Brussels could expect to be negotiating with emissaries possessing intimate knowledge of Germany and Europe, and who empathize with European interests. This alone would make a tremendous difference.

However, according to what we know now – and foreign policy rarely plays a significant role in elections – Biden will not necessarily reverse all of Trump’s decisions on the international stage. He is unlikely to move the US embassy back to Tel Aviv from Jerusalem, and whether he rejoins the Iran nuclear deal – a bone of contention even in his own party – is an open question. And no one should expect the US to drop the demand that the Europeans, and particularly Germany, raise their defense expenditures. Barack Obama and his Vice President Biden, already applied considerable pressure on this issue almost a decade ago. And as Americans are weary of war, they will not approve of more intensive international ventures.

At any rate, domestic problems like those Obama faced in 2009 at the beginning of his presidency, when the US was mired in financial crisis, are likely to command all of a new government’s attention from day one. Addressing the pandemic and its severe economic ramifications will be the mega-issue of a Biden-Harris administration. In contrast to Trump, Biden will place emphasis on international coordination in this regard. A travel ban for Europeans without previous discussion with US allies will not happen under Biden. And his team would sooner address a looming global crisis over food supplies – not in conflict with other countries, but rather with their cooperation.

However, the economic situation is likely to force a Biden administration to do its utmost to assure that the US will regain its footing. “Build Back Better” is the official campaign slogan, but “Buy American” might be a more honest one. It would be naïve to think that under Biden and Harris, Washington would never turn to protectionist measures. For proof, one need look no further than the Democrats’ economic platform, which was formulated in cooperation with the party’s assertive left wing: “For too long, the global trading system has failed to keep its promises to American workers. Too many corporations have rushed to outsource jobs, and too many countries have broken their promises to be honest and transparent partners.” The pandemic has laid bare the risks of being overdependent on global supply chains. Moreover, Biden is making the campaign pledge of investing $400 billion in the purchase of goods produced in the US before concluding any new trade agreements. A Biden administration will also heed and react to trade balance differentials.

But the general tone of US diplomacy will sound rather different than it does now. Over the past three-plus years, tensions in trans-Atlantic trade disputes have heightened, as each move by one side is usually followed by an escalated reaction of the other. One should hope that in new trade disputes, the World Trade Organization will once again become more deeply involved. The Democrats also perceive the need for reforming this WTO, even if their plans remain rather vague.

The future composition of Congress will be crucial in determining how much leeway, allegiance and support Biden and Harris would enjoy. Obama and Biden did not, for example, succeed in getting the Paris Climate Agreement through Congress. And with the Iran nuclear deal, the dismal outlook for success prevented the Obama government from even seeking congressional approval. It will be vital for Biden – and for an improved foreign policy – to see the Democrats gain a majority in the Senate; and as of now, the odds of such an outcome are none too shabby.

During Trump’s tenure, dealings with China have become a major issue, and the pandemic has only exacerbated this trend. It is widely believed in Washington that Beijing has indulged in malicious behavior, which has led the Trump administration to resort to harsh rhetoric vis-à-vis Beijing. But Biden would also pursue a foreign policy critical of China. In his campaign, he has continually attacked the incumbent for being soft on China.

Biden has already revealed that he would not immediately lift punitive tariffs against China. It is also likely that his administration would do more to emphasize human rights issues in China, which will increase pressure on Germany and Europe to side more clearly with the Americans. From the US perspective, Europeans have consistently acted too hesitantly in the face of Chinese provocations, and placed too much emphasis on their own economic interests. This might pose a threat to trans-Atlantic relations, even once Trump is out of office.

The same goes for relations with Russia. A Biden administration would not only seek trans-Atlantic collaboration, it would demand a closing of ranks. One persistent dispute, however, could soon finally be settled: The poisoning of Russian opposition leader Alexei Navalny has prompted the German government to openly consider terminating support for the Nord Stream 2 pipeline.

One reassuring factor for Europeans is that Biden’s most significant foreign policy advisors already played a role in the Obama-Biden administration. Tony Blinken served for a time as Biden’s national security advisor in the White House, as did Jake Sullivan, who played a leading role in forging the Iran deal. Although Susan Rice was not ultimately chosen as Biden’s running mate, she brings a great deal of experience from her tenure as Obama’s national security advisor and ambassador to the UN. Samantha Power, Obama’s second UN ambassador, is under consideration as a potential secretary of state. Europe expert Julie Smith, who served for a time as Vice President Biden’s deputy national security advisor and was recently called back to Washington from her fellowship at Berlin’s Bosch Academy, will play a role in a possible Biden-Harris administration, perhaps as the ambassador to NATO or the UN. 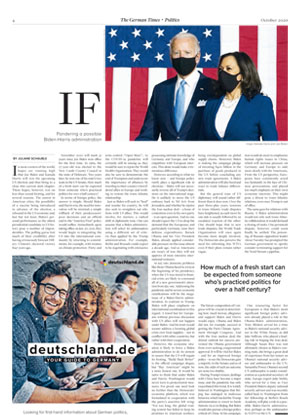