Looking at the West today, a Russian who witnessed the fall of the Berlin Wall 30 years ago sees a striking picture. Political America is gripped in a cold civil war, and is led by a president who acts as if he were still the star of a reality TV show. British politicians have managed to maneuver their island into a Brexit limbo. Their French colleagues had to file for collective bankruptcy before installing a kingly figure whose political clothes have since become threadbare. Even Germany’s political system, a paragon of post-World War II stability, is beginning to visibly wobble. A range of smaller Western countries add their own bright colors to the group portrait of the elites across the Euro-Atlantic world who have lost touch with their publics and confidence in themselves.

A few Russians are quite giddy at this view. They should sober up. Western economies, even if they may be facing yet another recession, are fundamentally strong. The United States still basically controls global finance and leads the world by a huge margin in both technology and innovation. For all the talk of fake news and Russian propaganda, mainstream Western media continue to dominate the information landscape across the globe. Migration waves to Western Europe and North America testify to how attractive Western living standards remain for the masses of less fortunate people all over the world. And, of course, the Pentagon wields phenomenal military power. So, unlike what happened to the Soviet Union and the communist system in the late 1980s, the West will live to see another day, even if it will have to transform itself in the process.

So, how should Russia deal with America and Europe in their present condition? Above all, one needs to accept that while the West is altering its structure at the national, international and supranational levels, it is not withering away. The United States will continue to be in the lead, even if its leadership looks less benevolent and less altruistic. Europeans and other allies will have to accept the new regime, even if begrudgingly, and protect some of their own interests. The EU, for all the initiatives of French President Emmanuel Macron, is unlikely to emerge as a strategic player anytime soon. Many Europeans are sufficiently terrified of China’s geo-economic expansion, Russia’s geopolitical resurgence or both. There will be hand-wringing, but also arm-twisting. In any case, the bonds that tie Europe to America will not disappear.

In this situation, Russia would be wise to focus its US policy on preventing a direct military collision. It must accept that the current confrontation will probably go on for years, meaning that sanctions will not be lifted. The Kremlin also must stay away from Trump: Vladimir Putin’s meetings with him only make things worse. Seeking to influence the US domestic scene, even in a most innocuous way, is counter-productive. Reviving US-Russian arms control will not help. The INF Treaty is dead, and New START is likely to follow when its time is up in 2021. Thus, Moscow can only work with Washington to prevent incidents from spinning out of control; to avoid escalation of running conflicts such as Ukraine; and to minimize mutual misperceptions. Crucial here is a 24/7 US-Russian military-to-military communication link, and high-level personal contacts between their military and security chiefs. These contacts, of course, are no substitute for a comprehensive dialogue that will have to wait at least five to six years, and possibly more.

In this larger strategic framework, Russia’s relations with Europe will need to focus largely on protecting EU-Russia trade links in the thickening sanctions environment and allowing human contacts to proceed despite growing alienation and estrangement. With EU-Russia relations largely frozen, Russian-European relations will be a sum of bilateral ones. While trade is only a bit more than half of what it was before 2014, it is still important, particularly in the energy sector. Security matters will have to take a back seat: Europeans cannot decide alone on the issues that fall within NATO’s competence. The OSCE is essentially irrelevant, and the Russia-NATO communications line is but an add-on to the US-Russian one. Yet, a few EU member states, including France, Germany and Italy, prefer to keep open their channels of political dialogue with Moscow. Despite the likely termination of Russia’s membership in the Council of Europe, contacts among ordinary people are still vibrant. This mutual interest that has so far withstood the hybrid war is a firm enough basis on which to begin discussing a new lasting foundation for the Europe-Russia relationship, one centered on trade, human contacts and neighborly ties.

It goes without saying that no such discussion can avoid the formal reason for the breakdown of Russia-Europe relations: Ukraine. While chances for solving the issue in the foreseeable future are slim, every effort must be made to ensure that incidents on land in Donbass, in the water off Crimea or in the Sea of Azov do not lead to escalation. The hybrid war may take a long time to play out, but it is crucial that, like its predecessor, its stays mostly cold.

A version of this article appears in print on Feb. 15, 2019, on Page 12 of The Security Times with the headline: State of Play – Russia and the fraying West

A call for European leadership in times of turmoil 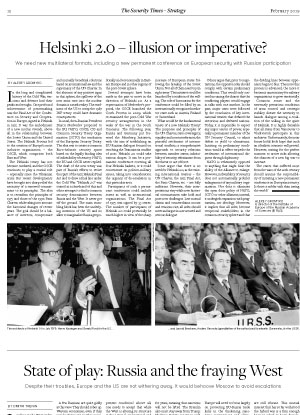