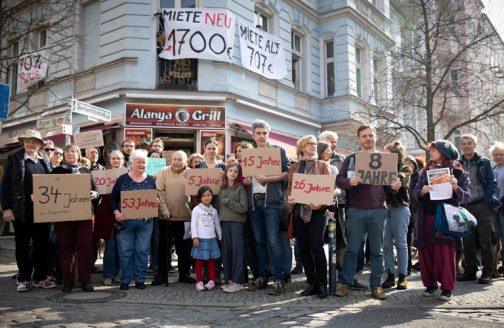 Imagine you live in Berlin, one of Europe’s most vibrant cities. You really love your apartment and your neighborhood. It’s affordable, the people are nice, parks and grocery stores are just around the corner. In a matter of minutes, public transportation gets you to the center of town, with all its cultural and commercial offerings. Commuting to work is a snap. Why would you ever move?

Enter your new landlord, Deutsche Wohnen, a commercial property company that owns 167,000 units across Germany – 164,300 residential and 2,700 commercial. Your apartment is one of roughly 116,000 units Deutsche Wohnen has acquired in and around Berlin, making it the largest provider of rental apartments in the area. At first, you don’t think much about your new landlord. After all, the building you live in has changed hands before. But then you start to notice things: when you receive your annual service bill, it’s far less transparent than the ones you got from your old landlord. And everything is a lot more expensive. You start to wonder if you can still afford to live there in the future.

And when the old heater in your apartment breaks down just before Christmas, it takes days before someone responds and weeks before it’s replaced. Since you end up freezing in your apartment and cannot take warm showers for over a month, you decide not to pay the full rent – in accordance with German law. In return, your landlord sends you a warning. Then the elevator stops working and doesn’t get fixed for six months.

You feel sorry for your new neighbor who had to carry everything up the stairs and who pays a lot more rent than you do for pretty much the same apartment. And when you finally read in the newspaper that Deutsche Wohnen increased its annual profits by a whopping 11 percent due to an increase in rental income, you go from being worried to annoyed to downright angry – a feeling many tenants of Deutsche Wohnen units share. And they are not alone.

Several tenant initiatives have formed across the city to force large private housing companies to better maintain their properties and to charge affordable rent. But one initiative has gone a step further: Deutsche Wohnen & Co. Enteignen (Expropriate Deutsche Wohnen & Co.) is demanding the (re-)municipalization of rental units owned by large housing companies such as Deutsche Wohnen, Vonovia and LEG Immobilien. They are calling on Berlin’s municipal government to pass a law in accordance with Article 15 of the Basic Law, Germany’s constitution, that would allow for the expropriation of private housing companies that own more than 3,000 apartments in the city. In return, the companies would be compensated at below-market prices, and the newly municipalized apartments would be managed by a public board on which the majority of decision-makers would be tenants and citizens. Critics warn that such a solution would focus only on protecting existing rental units and not on investing in much-needed new housing projects.

In addition to speculation and a massive population influx, a major cause for Berlin’s rents doubling over the past decade has been a backlog in construction, especially of rental and public housing units. And both developers and city officials share the blame. But is expropriation of commercial housing companies the answer?

Not according to urban economist Eberhard von Einem, who points to a variety of special rights the city holds that are designed to prevent speculation and provide affordable housing. These rights cover a wide spectrum of homes for low-income to middle-class families that are currently being pushed out of the market. Instead of being stumped by rapidly rising rents and property prices, the city could make use of these rights – as it once did. “Back in the 1990s, the city created several development areas: Spandauer Wasserstadt, Eldenaer Strasse, Rummelsburger Bucht. But after 1996, these were aborted before being finished – with the exception of Adlershof – without ever evaluating the experience and mistakes,” von Einem noted recently in Der Tagesspiegel. “Since then, the city government has lost its courage – and its memory. Today, these special rights have largely been forgotten, although they are still applicable.”

If applied, the city could legally bind project developers, private investors, housing societies and co-operatives to a number of terms, which would ensure good quality architecture, proper facilities as well as affordable rents and real estate prices. “In particular, all of this can be done in a more detailed way and with more legal certainty than via terms that are written into master plans or building permits,” writes von Einem. Meanwhile, as municipal administrators have yet to take action, anger prevails among Berliners, who are asking: “Who owns the city?”

Haphazardly buying back apartments once privatized in an attempt to consolidate the city’s budget is certainly not a sustainable solution. Then again, neither is expropriation. After all, re-municipalizing Berlin’s water supply in 2013 did not reduce costs for consumers. It seems that urban development requires new players that are not driven by capital gains, but rather by social responsibility. “Trusts and other organizations dedicated to public welfare are important catalysts for collaborative, affordable and inclusive living,” says Markus Eltges, director of the Federal Institute for Research on Building, Urban Affairs and Spatial Development (BBSR). “They follow a concept with social and cultural goals. Rate of return is not central. The many models and initiatives that strengthen civil society enrich what is happening on the housing market and co-create neighborhoods.”

But if they want the city to implement measures to once more make housing abundant and affordable, it would behoove Berliners to join the protests and sign the petition to have exploitative landlords expropriated. Let’s hope things improve once BlackRock, MFS and other institutional investors that hold large shares of Deutsche Wohnen can no longer push for rent increases and higher returns on their investment. 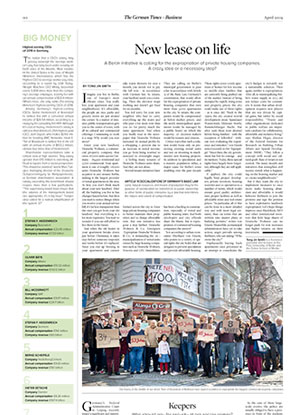