When Berlin takes time to celebrate its best chefs at the annual Berlin Master Chefs gala dinner, these prize-winning culinary artists are usually asked to do the very thing they’re being honored for: cook. In 2015, Lukas Mraz – head chef at a hip Berlin restaurant at the time – was one such honoree. On that evening, he created something very special, namely a vegan tartar – albeit with a fried egg on top. A couple of courses later, he served a more traditional plate of warm beef tartar with brown butter, soy sauce, mushrooms and roasted onions. People have called Mraz a “wild young chef,” and that night he showed the dinner guests – almost all of them Berlin-based businessmen and businesswomen – just what contemporary cuisine could do. From that moment on, vegetarian and even vegan food culture has been considered socially acceptable in Berlin.

Today, roughly four years later, one might get the impression that the entire country has gone wild for meatless burgers. One US brand, in particular, has become a big hit. According to media reports, their burgers sell out the minute they hit the shelves at major German discount supermarkets.

Indeed, plant-based eating has now emerged as a lucrative new branch in the food industry, with producers using modern strategies to expand their market share. However, as animal welfare, sustainability and climate-friendly policies are all hot topics, conscientious consumers point out that the plant-based burgers are shipped to Germany all the way from California – in copious amounts of packaging to boot.

“Is this the new green schizophrenia?” asked one blogger recently. “For me, eating vegan goes hand-in-hand with a conscious respect for our environment.”

Even though the popular US plant-based burgers do not fulfill those criteria, they’ve nevertheless struck a nerve among consumers, in particular by calming their bad conscience and suggesting a sensible handling of resources. And it’s true, these days everyone in Germany is aware of the extent to which industrial livestock production involving cattle, pigs and poultry damages the environment.

The younger generation in particular is fighting to create a better and more just future. And the youngest among that group are now an aggressively courted target group in the food industry. Kids simply don’t want to eat meat anymore, especially when they find out where the sausage, schnitzel or burger comes from and that an animal had to die to get it there. “I don’t eat anything that has eyes,” they say.

This often makes it difficult for families to keep the peace at dinner time. So it’s understandable that environmentally conscious parents are grateful for any alternatives to meats and sausages, such as those churned out by Rügenwalder Mühle, one of Germany’s best-known meat product manufacturers.

In Lower Saxony, Rügenwalder Mühle has been connected almost exclusively to meat products for the past 183 years. Since 2014, however, it has been producing vegetarian alternatives designed to perfectly mimic meat. For example, supermarket chains now carry frozen vegan Mühlen steaks, vegetarian Mühlen ground beef and vegetarian Mühlen bratwurst. And revenues are growing fast. In fact, according to managing director Godo Röben, they’re increasing at the same rate as consumers’ environmental consciousness.

Until only a few years ago, vegans and their missionary attitude towards food consumption were still subject to ridicule from the majority of consumers. They had to buy their food in stores that sold exclusively vegan products, and some vegetarians considered themselves lucky if their carnivorous friends took them to a restaurant serving meat, even if they had to make do with just side dishes.

These days, vegans, vegetarians and carnivores can enjoy a full dinner together, at least in big cities. Especially for health reasons, the idea of going without meat every once in a while is catching on, and all the more so since prominent TV chefs like Sarah Wiener began campaigning for meatless alternatives.

Stefan Hentschel is a wizard with vegetables. He’s also head chef at the first and only German vegetarian restaurant to receive a Michelin star. Roughly 11 years ago, he helped build up Cookies Cream, a vegetarian restaurant belonging to Cookie, a committed vegetarian and long-standing stalwart of the Berlin club scene. At that time, scandals like mad cow disease had shaken consumers’ trust in the safety of the Big Food industry.

In its first year of business, Cookies Cream hosted countless guests from the club scene, on Tuesdays and Thursdays, in particular. They would eat at the restaurant and then take a flight of stairs directly to the adjoining club without having to wait in line. On the other days, back then, business was slow.

In Berlin’s surrounding countryside, things are still moving comparatively slowly. “In more rural regions,” notes Michael Köhle, “the idea of going without meat is not nearly as widespread as in the cities.” Köhle is the host at Herz & Niere, a restaurant chosen as 2016 Host of the Year by the Berlin Master Chefs. In spite of its somewhat grisly name – it means heart and kidney in English but also alludes to a phrase meaning “to put to the acid test” – this Berlin locale is known to vegans, vegetarians and carnivores alike for using all parts of the plant or animal and foregoing industrial goods and replacement products. “On average, one-third of our guests order vegetarian,” says Köhle. “What was once an exception is now a part of everyday life.”

This kind of peaceful coexistence is not the rule, however. For the majority of people in Germany, a good meal still includes a piece of meat. For the post-war generation, in particular, it remains an expression of a certain standard of living. And this applies especially to men. The German magazine Beef knows this and even advertises its monthly publications with the motto “Männer kochen anders” (men cook differently). For one restaurant opening, the magazine went so far as to ban women from participating – supposedly as an advertising gag.

Germany’s tradition of hearty food has yet another key element, namely the so-called “Brauhaus” or brew house. And now, even in this realm, Berlin is showing that it can do things differently. “We focus on vegetables,” says Ben Pommer of very popular BRLO Brwhouse, located at the edge of the always-crowded Gleisdreieck park. “Vegetables are exciting, vegetables are multifarious. With the help of different cooking and preparation methods, you can make vegetables so amazing in terms of their texture, appearance and taste that you won’t miss meat at all.” At Pommer’s brewery, meat plays only a subordinate role. However, as so many of his guests eat meat on a daily basis, he still hears a lot of people say “wow” when they see the menu.

Hentschel is convinced that Berlin’s food tourism promises “more turnover than its party tourism.” Food lovers the world over continue to travel to Berlin to dine at every locale on their culinary hit list. And today, vegetables have acquired a new and more prominent status on that list, with many Michelin-star restaurants now offering a separate vegetarian menu.

Marketing experts for this kind of Berlin tourism love this trend. They now cleverly advertise the German capital as a “vegetarian and vegan hot spot.” Even meatloving Brazilians are said to have discovered the city as a culinary metropolis for vegetarian and vegan cuisine.

Susanna Glitscher
is project manager and head of content for Berlin Food Week.

Eva-Maria Hilker
is editor and publisher of the food magazine EssPress Berlin. 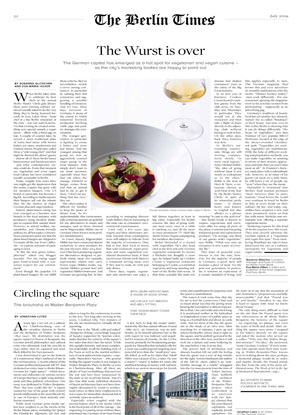