A call for European leadership in times of turmoil

No one looking back on the past decade can do so with satisfaction, let alone complacency. The world has become unstable. The international order created after World War II is breaking down; the global institutions established as part of that order are frail and ineffective. The COVID-19 pandemic has turned previously existing fault lines into frontlines. Troubles are piling up everywhere. In many places, cooperation is morphing into confrontation. US-China tensions have become the main axis of global politics; the rivalry between the two great powers will dominate the near future, regardless who is in the White House next January.

The European Union will have to adjust to the shifting geopolitical dispensation. No longer can it bank on the United States to provide global guidance and military protection. And it has to recognize that China, its primary economic partner, has grown into an assertive, some would say, aggressive challenger aspiring to world leadership.

Several states are testing Europe’s unity: China with Xi Jinping’s Silk Road Initiative and the “17+1” cooperation scheme in Eastern Europe and the Balkans; Russia with Vladimir Putin’s assault on Ukraine and his attempt to destabilize the Brussels community – a target shared by US President Donald Trump; and Turkey with Recep Tayyip Erdoğan’s neo-Ottoman imperialism.

At the same time, the Europeans see a plethora of threats and crises coming ever closer. The Syrian civil war has swept millions of refugees west. Rising tensions over Ankara’s predatory hunt for undersea oil and gas in the Mediterranean conjure up the dire specter of a war between the two NATO members Turkey and Greece.

Another flash point touching Europe’s interest is Libya, riven by internal conflict, in which the UN-recognized government in Tripoli is supported by Turkey, while Russian mercenaries assist General Khalifa Haftar’s regime in the east. French President Emmanuel Macron is trying to protect Total’s oil interest in the desert country. He is also pushing the Lebanese toward meaningful reforms of their collapsed political system.

Together with 1,100 German soldiers, central African forces and 15,000 UN Blue Helmets, 5,000 French troops are battling in Mali against Islamist terrorism. The recent coup – at the hands of Malian forces trained by the French and Germans – sent ripples across the Sahel and beyond.

In the Far East, China’s on-slaught on the freedoms of Hong Kong and its saber rattling over Taiwan could, like Washington’s elevation of the People’s Republic to an adversarial rogue state, set off an explosion in the South China Sea – a waterway of utmost importance to EU commerce.

Nearer to home, the fraudulent elections in Belarus triggered a popular uprising against the callous tyranny of Alexander Lukashenko. Its violent suppression by OMON police and the possibility that Russian troops might join the crackdown confronted the EU with another sticky problem, this one at its very border.

Given the darkening horizons, it is hardly surprising that calls for making Europe capable of global politics, weltpolitiktfähig in German, have been raised ever more insistently. Ursula von der Leyen, before assuming the presidency of the European Commission, put it quite bluntly: “Soft power alone won’t suffice today if we Europeans want to assert ourselves in the world. Europe must also learn the language of power.”

Macron chimed in: “We must use the grammar of today, a grammar of the language of sovereignty”; he wants to “revive Europe as a political and strategic power.” Many others agree that only in a united Europe can our several nations be strong.

Learning the language of power, von der Leyen explained, “for one thing means building up our muscles, where hitherto we were able to rely on others, for example in security policy. Furthermore, it means using the existing power more purposefully where European interests are concerned.”

What has become of all these striking statements? Regrettably, they have not moved beyond mere sound bites.

Optimists speak of Europe’s geopolitical awakening in the course of the COVID-19 pandemic. Europe is stirring, they say, recalling Jean Monet’s dictum: “Europe will be forged in crises.” In the EU’s €750 billion ($885 billion) economic recovery program, they see a “Hamiltonian moment” – a point in history when joint debt policy becomes the first chapter of a federal playbook. The deal allows the EU to borrow, tax and spend like an actual state.

It is indeed an important innovation enabling a strong economic convalescence and a more prosperous future. It does not, however, spell more unity among the 27 member states in foreign and security policy. The much touted strategic autonomy of the European Union remains hobbled by widely varying national stances on most foreign issues. There is no agreement on how to deal with Russia, China, Turkey, Africa or even the US. And the principle of unanimity regularly prevents joint action.

As long as the unanimity rule prevails and any small state can veto collective action, Europe will not be taken seriously in global politics. To be respected, it must speak with one voice – as it does in trade politics.

Josep Borrell, the EU High Representative for Foreign Affairs and Security Policy, is not alone in calling for the abandonment of the unanimity principle and the introduction of qualified majority voting. “It would be better,” he argues, “to adopt a strong and substantial position by a majority rather than unanimously adopting a weak position with little substance.” His stance is shared by many others, including German Chancellor Angel Merkel and Foreign Minister Heiko Maas. But so far, no one has taken any concrete initiative.

At any rate, it is hard to see that such an initiative would be assured of success. More likely than not, the EU will remain condemned to make indignant statements about territorial encroachments, human rights violations and meddling in its internal affairs by foreign powers, calling them deeply concerning, deplorable and unacceptable, but basically limiting itself to lamentations and ineffective sanctions.

In these times of turmoil, that’s not enough. To be taken seriously in the world, the EU will have to forge a foreign and security policy all of a piece. If necessary, a core Europe should forge ahead, as it did when creating the eurozone and the borderless Schengen area, where no one is excluded, but the unwilling cannot put spokes into the wheel of the willing.

What could or should be the guidelines for a European foreign policy? The following ten are a start:

One should not assume with complacency that the world will breeze through the crises to come. Leaders had better heed the warnings of the historian Margaret MacMillan: “How the world copes will depend on the strength of its institutions and, at crucial moments, on leadership. Weak and indecisive leaders may allow bad situations to get worse, as they did in 1914. Determined and ruthless ones can create wars, as they did in 1939. Wise and brave ones may guide the world through the storms.”

Let us hope that the European Union can find and furnish enough such wise and brave leaders to shepherd us out of these harrowing times. 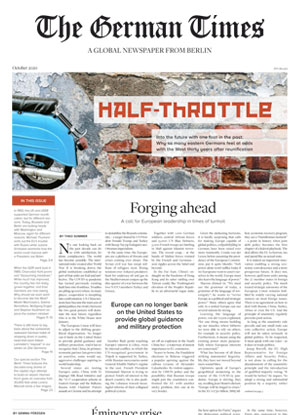