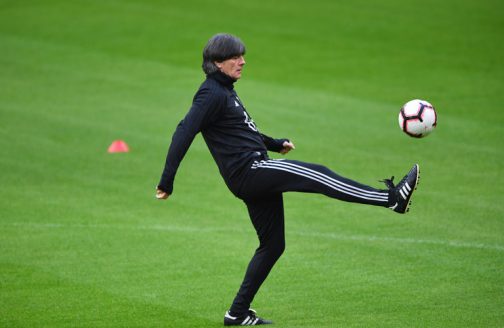 Joachim Loew got his act together just in time. After balking and bristling at calls for change, he’s finally put the German national soccer team on a different track. Whether this proves effective has yet to be seen, but at least they got off to a good start with a convincing 3:2 win at the European Championship qualifier. That win was all the more satisfying as it came in Amsterdam against an exciting young Dutch team seen by many as the new standard in soccer. As recently as last fall, the Germans had lost to the Dutch by a humiliating 0:3. That game marked the final blow in a historically disastrous year for German soccer. Never before had the national team been eliminated in the group stage at a World Cup. Ever since that moment, the German Football Association (DFB) has sought to introduce a plethora of reforms. Even coach Loew had to answer for himself, and the otherwise beloved trainer came under heavy criticism from all sides.

The German team’s failure to re-launch after the 2018 World Cup disaster, and especially their embarrassing elimination from the UEFA Nations League in the three-way battle with Holland and France, took place on Loew’s watch and with his “old” selection of players. This was the same group led by Loew on their intoxicating journey that began in 2008 and culminated in a World Cup title in 2014. It was after that thrilling win in Rio that the problems began – as they so often do when a team reaches the zenith of its capability and success.

Even Loew couldn’t just let his World Cup stalwarts go. It was also clear to these players that they would continue to be unrivaled heroes for years to come, no matter what they did. Just as the then-coach Franz Beckenbauer had prophesized in the frenzy that took place after Germany’s previous World Cup title in 1990 in Rome: “If we now add the players from the GDR team, our national team will be unbeatable for years.”

But things turned out differently back then, just like they did this time. Especially in the world of soccer, it’s normal that young and hungry players are eager to step in and take the place of those megastars who – after enjoying tremendous success – tend to regard their position on the national team as a right rather than a privilege. And this is by no means a specifically German phenomenon. After its 1998 World Cup win, France’s team sputtered out winless in the group phase four years later at the 2002 World Cup in Japan/South Korea. Italy, the World Cup champions of 2006, went bust in 2010 as the last in their group in the first round. And the same thing happened to Spain’s winning team from the 2010 World Cup in South Africa; four years later in Brazil, they were eliminated early and went swimming instead.

In other words, the stunning 2018 failure of the DFB side in Russia put them in very good company in a long and deeply rooted tradition. On the other hand, shouldn’t the coach have known better? Surely, he was aware of the tradition? Shouldn’t he have started introducing changes to the team immediately – creating new challenges in the process – precisely because this tradition constantly repeats itself?

But Joachim Loew simply didn’t recognize the signs of the times. He dragged two old heroes – Bastian Schweinsteiger and Jerome Boateng – through the 2016 European Championship tournament, both of whom were just coming back from severe injuries. At the time, backbenchers were heard to joke caustically that these two players spent more time with their physiotherapists in between European Championship games than they did with their colleagues on the training field. Toward the end of the tournament, it was easy to see that these two stalwarts were completely overwhelmed, with each player committing a bizarre and obvious handball in his own penalty area. In the quarterfinals, Italy took advantage of Boateng’s lapse to knot the game at 1 with a penalty kick. Luckily for the DFB team, they were able to go on to win that match on penalties. When Schweinsteiger deliberately had a handball in the semifinal against France, however, they weren’t so lucky. The host country’s team converted the penalty kick and went on to defeat Low’s side 2:0.

Still, the soccer world and its followers have very little sense of some of the more subtle processes, such that even these alarming events were soon forgotten. Fans even went so far as to almost caricature Loew’s tremendous loyalty to his men. And even when Loew won the Confed Cup in Russia in 2017 with an exciting selection of junior members of the national team, he didn’t take the logical next step and place some of the young talent on the top team. Instead, the strength of his B-team simply fueled his comforting certainty that his older A-team could easily win another title.

In other words, Loew didn’t bother launching
any major changes in style and play in the four
years between the 2014 and 2018 World Cups. He stuck to his guns in a sport that is becoming faster and faster every day. Loew rejected any inquiries as to whether he intended to rejuvenate the team with younger players, and even received a massive public scolding right before the 2018 World Cup in Russia. This reached a crescendo when he incomprehensibly left striker Leroy Sane off the final squad for the World Cup team. For Loew, the highly talented 23-year-old was too unpredictable, too headstrong – and probably too iridescent as a person. Sane, of all people. Even at the time, it was clear to everyone else that Sane already embodied the type of player Loew’s group of ossified and overly self-assured veterans were going to need in Russia: a high-speed striker who can single-handedly change the course of events on the pitch and who can engage two or three opposing defenders at any time.

But Loew held on loyally to his old heroes. In the run-up to the World Cup, he tolerated them being involved in advertising spots and PR stunts and proudly allowed the team to be renamed “Die Mannschaft” (the team). Most consequentially, he entirely misjudged the division within the team that was to be driven by the scandal involving players Mesut Oezil and Ilkay Gundoğan posing for a picture with Turkish President Recep Tayyip Erdoğan. Loew even let his men take their favorite hairdressers with them to Russia. The big game plan remained driven by the principle of hope. Everyone hoped that the German team’s legendary mantra – in which they seem to improve with every passing game – would automatically take effect again. In terms of his own fate as coach, Loew was also able to travel to the World Cup quarters in Moscow-Watutinki with relative peace of mind, seeing as DFB president Reinhard Grindel had already extended Loew’s contract until 2022 – even before seeing the results of the 2018 tournament.

The Grindel era itself came to an end in late April, when the DFB boss admitted to having accepted a luxury watch from a foreign functionary. It was the scandal that finally broke the camel’s back – and it coincided with the start of Jogi Loew’s second era.

Will this era prove a success? Until recently, Loew coached his old guard like an espresso-sipping life coach. In other words, he relied on affable familiarity rather than force in shaping the national team to follow his will. And when he dared to venture into the strategic arena with his own ideas, he often fell flat on his face. Even worse than his outing at the European Championship in France in 2016 was the previous European Championship in 2012 in Poland/Ukraine, where Loew chose the wrong players and coached the team so hopelessly into the ground during the semifinal against Italy that their defeat was already secured at the halftime break. It was the first time people began questioning Loew’s professional aptitude: Does this coach have what it takes?

With today’s all-new DFB squad, Loew will have to do more than play the role of fraternal guardian. The 23 players he nominated for last month’s European Championship qualifier against Holland were all under 30 years old – with the exception of goalkeeper Manuel Neuer. Where only recently Mats Hummels, Thomas Mueller and Jerome Boateng were strutting their stuff, nobodies like Maximilian Eggestein (22, Bremen), Niklas Stark (23, Hertha) and Lukas Klostermann (22, Leipzig) are now hard at work. It’s a debutante ball, with extra strength coming from Sane and Serge Gnabry, both of whom have matured into the team’s go-to strikers in record time. And, yes, there are still a couple of leftovers from the World Cup era: Toni Kroos, Joshua Kimmich and Marco Reus.

And yet, the fact that Loew feels no need to divest himself of his obsession with ball possession means that winning through ball possession will prove twice as hard – even with the new players. “We have to improve our dynamics, speed and determination,” he says. “Our games had a pace that was far too slow. We have to clean that up.”

In the future, Loew will have to deal with members of a new and fast-paced generation that don’t play in any top league. The mercilessness with which FC Bayern Munich has reduced the Bundesliga to a kind of monopoly has now begun to palpably hurt operations at the national level. In the Bundesliga, hardly any team dares to mobilize its full forces over a full 90 minutes against Bayern Munich. Why should they when it’s a lost cause anyway? As a result, Bayern ends up lacking the experience it needs for international games. All German teams, including Bayern, were eliminated before reaching the quarterfinals in the Champions League. In the Europa League, only Eintracht Frankfurt has made it to the quarters.

The fact that Bayern Munich’s monoculture is
paralyzing how German soccer operates is one thing; but that it has brought about a situation
in which Munich also sees Loew – the national team’s coach – as a near-employee is an even bigger problem. When Loew, in March, ousted his old stars Hummels, Mueller and Boateng in one fell swoop, he ran the risk of inspiring the wrath of Uli Hoenes, whose anticipated threats loomed large. But the conflict never came, because the ousted players simply could not prove their worth to the national team, especially as Bayern failed miserably in the Champions League.

Meanwhile, across the border in Holland, Loew’s wild young guns stormed onto the scene with a 3:2 victory over the Dutch team. In other words, from the bosses in Munich’s perspective, this was not the moment to give Loew a public piece of their mind. Still, although he emerged unscathed from that potential battle, the national coach hasn’t won anything yet. If anything, he’s won some time – time to
prove he’s capable of learning new tricks and can step out of his own shadow. 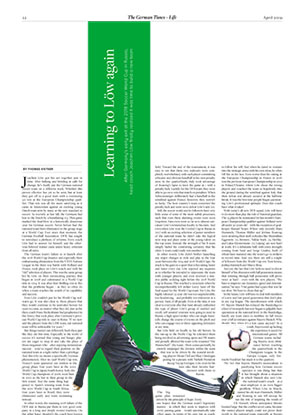