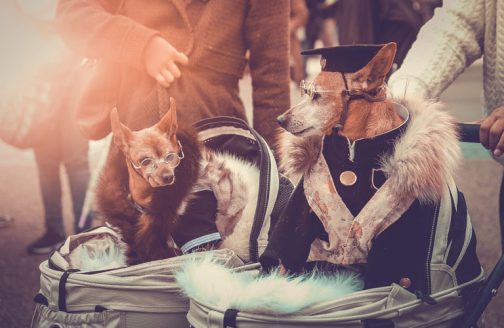 In Germany, you can joke about everything,” quipped Peer Steinbrück recently, “except about dog owners.” And Steinbrück, a former German finance minister under Angela Merkel, would know. While still a politician for SPD, he became well known for his quick wit, and today, after retiring from politics, he has been touring the country on a regular basis, performing in a satire show with popular German political satirist Florian Schroeder. In other words, he has a lot of experience when it comes to figuring out where that famous German sense of humor begins – and where it ends.

According to Steinbrück, Germans will laugh about almost everything – even about themselves and their own children. But the subject of dogs is taboo. It’s sacred, so to speak. At least in this regard, German dog owners are absolutely humorless.

Indeed, if we take German dog owners at their word, people who don’t own a dog are incomplete. Dog owners never tire of communicating this fact to the rest of humanity. They stride with their chests out and noses up past all those poor, dog-challenged half-people. It doesn’t matter whether the worshiped creature at their side is large or small, purebred or rescue, attack dog or lapdog, a loud barker or an obedient accomplice. For dog owners, dogs are more than pets; they are the source of meaning and identity. Plus, they make it possible for their owners to differentiate themselves from one group while still belonging to another. In other words, dogs are a means to an end. They are a status symbol similar to all the other things people like to show off: my Porsche, my yacht, my children, my dog. Sometimes dogs even become full-fledged family members who make an indispensable contribution to the development of children on their way to becoming well-rounded individuals.

While it’s true that this human-dog relationship might be similar in other countries, there is no question that the attachment to this kind of four-legged friend is nowhere else as intimate and emotional as it is in Germany.

No other country in Europe is home to as many dogs as Germany – a total of 10 million. Today, every fifth home in Germany has a dog. And the numbers are rising year after year.

Dogs are best friends, substitutes for absent partners or children and faithful companions who forgive everything, overlook every blemish and keep everyone happy when spouses or kids are in a bad mood. All you have to do is look at Fido, Lady or Fletch and the beasts will start wagging their tail and drooling with joy, day ¬after day, as if their happiness depended on it – which it actually does.

Dogs are dependent on the humans who take care of them; in return, they reward humans with love, loyalty and devotion. From time to time, however, the boundary between humans and dogs shifts, and it’s not always clear who needs whom. A questionable and not necessarily animal-friendly symbiosis occasionally emerges, where dogs share their owner’s bed, eat their steak at the dinner table and take over the family sofa.

But, alas, nothing is too good for the dogs Germans love. And it would appear that nothing is too expensive either. In 2018, Germans spent almost €1.5 billion on dog food alone, which is more than they’ve ever spent. The market for dog snacks is growing rapidly, too, becoming a veritable treasure trove for enterprising inventors. For example, one beachside restaurant on the German island of Sylt – a popular and often luxurious holiday destination – offers a very special delicacy: dog-friendly frozen yogurt in two delicious flavors: “Beef & Carrot” and “Wild Salmon & Carrot.” Each mini cup costs €3.

There are apparently no limits to the foolish lengths humans will go to when seeking to pamper their four-legged buddies. The list of inventions extends from luxurious dog baskets and brand-name clothing all the way to electric car ramps for getting the animal into and out of cars. There’s also a constantly growing army of hairdressers, masseurs and psychologists training dogs’ minds and bodies alongside – and often in competition with – fitness facilities, dog schools and yoga studios.

According to Germany’s Industrial Association of Pet Care Producers (IVH), the average total cost of owning a dog adds up to about €35,000 over the course of the animal’s life, and the numbers are only rising. That sum does not include the money spent by owners on specialist books or for tickets to live shows organized by popular dog coaches like Martin Rütter. For years now, Rütter has been selling out arenas and soccer stadiums – places normally reserved, at least in Germany, for big names like Helene Fischer, Radiohead and Ozzy Osborne.

Dog owners flock to these shows. They sit there and laugh. On these occasions, Rütter – the “dog whisperer” – is allowed to make dog jokes, but only because he’s one of them.

Things were a lot different for dogs a couple of centuries ago, when humans weren’t yet putting them on pedestals. At that time, they had a more practical use like acting as a guard dog on a farm. Their homes were sheds outdoors and their meals consisted only of leftovers. However, the nobility soon discovered dogs as useful companions on hunting trips and in evocative family paintings. The burgeoning bourgeoisie then followed suit, thus prompting the dog’s breakthrough as everybody’s darling. In the mid-19th century, dogs even began serving as trusted political sidekicks.

On this point, in particular, the Germans have always been special. The dogs belonging to Chancellor Otto von Bismarck came to be known as Reichshunde, literally “dogs of the empire.” Bismarck regularly appeared in public with his dogs and even had them buried with much pomp and circumstance on his estate near what is now Koszalin. One of his favorite dogs, a Great Dane named Tyras, even provoked a tumult at the Congress of Berlin in 1878 when he attacked the Russian foreign minister and tore his pant leg.

Great Danes were considered “imperial dogs” for the duration of the German Empire. For his part, however, Kaiser Wilhelm II preferred short-haired dachshunds, typical small hunting dogs that have remained popular to this day. When his favorite and constant companion named Erdmann died, the Kaiser built him a memorial that is maintained to this day by the Kassel chapter of a Dachshund association called the Deutscher Teckelklub 1888.

The Nazis took the love of dogs to the pinnacle of political appropriation, seizing upon the German Shepherd as a contrast to shabby foreign imports, such as Danish mastiffs and English pugs. Indeed, the animals had to be purebred German if they were to embody the virtues of courage, strength and discipline. Adolf Hitler himself made several appearances with Blondi, his German Shepherd. To this day, this breed has been unable to entirely shake off its reputation as a Nazi dog. But it would be a grave injustice to categorize every German Shepherd owner as a right-winger; after all, these clever animals are in high demand as detection dogs or watchdogs at all levels of society.

Still today, many Germans make political statements with their choice of dog. Some deliberately avoid getting purebred animals, even though they could easily afford to. That would be much too conventional, too petty-bourgeois. Some people bring a street dog home with them from vacation in southern Europe or employ the services of Streunerhilfen – stray dog helpers – that match willing adoptive parents with dogs from Bulgaria or Romania, thereby saving them from being euthanized.

Big German cities’ hip urban districts – where progressives, greens and bleeding-heart liberals live – and upscale villa neighborhoods the bastion of conservatives – are full of these rescue dogs. Each one of these shaggy crossbreeds is living proof that its owner has a big heart and has done something good by helping those in need – not just refugees, but also four-legged friends. In most cases, these tail-waggers are grateful, and don’t even complain when given such illustrious names as Camus or Mozart. Better not to joke about it.

Bettina Weiguny
is a freelance journalist based in Bad Soden. She writes a weekly column in the Frankfurter Allgemeine Sonntagszeitung. 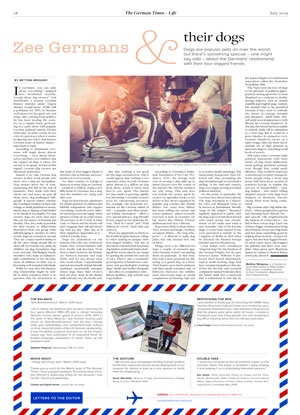