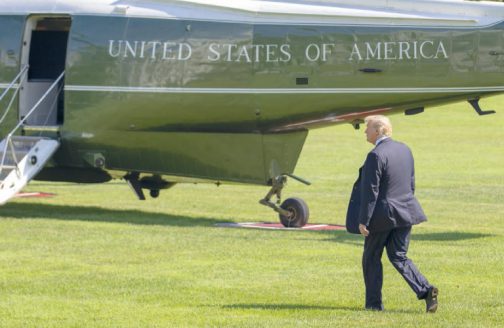 We live in perilous times in an imperiled world. The most dramatic shift of power and wealth since the ascent of the United States to worldwide dominance a hundred years ago puts an end to 500 years of Western (and white) hegemony. China’s rise from international insignificance to global clout is changing the power balance. The Chinese model – capitalism plus authoritarianism – poses a grave challenge to the Western system of free market democracy, as despots all over the world are eager to emulate it. The liberal international order, built by America after World War II and sustained by its European allies ever since, is collapsing. Democracy is in retreat; nationalism and tribalism are gaining ground; and global instability continues to grow. Even in the so-called free world, democracy is again at risk.

Worse yet: Facing a China on the rise and a disruptive Russia in a world replete with threats and disorder, what used to be known as “the West” is breaking down. The cause, in the eyes of most Europeans, is President Donald Trump’s apparent determination to destroy the world order the US created: the web of alliances and institutions that underwrote freedom, safeguarded peace and promoted prosperity. “Today,” Robert Kagan states in his recent article titled “The Cost of American Retreat,” “the US seems bent on relinquishing its duties in pushing back the jungle.” Atlas, the Titan of endurance, is tired of holding up the sky.

This is not a new phenomenon. Isola­tionism has been the twin of imperialism throughout America’s 242-year history. Swings from geopolitical outreach to withdrawal into its continental shell have punctuated the country’s policy. The current retreat has been long in coming. It was George W. Bush who first pulled back from multilateralism, making unilateralism his guiding principle. Barack Obama prioritized nation-building at home and leading from behind. Under Donald Trump, strategic restraint has shriveled to strategic retreat. He refuses to lead. His battle cry “America first” jettisons the basic concept that deal-making means taking the interests of your partners into account instead of rudely overpowering and crushing them. Trump is the first to think that the American world order undermines American greatness – Mark Leonard’s sly remark is dead-on. For the time being, the president marks an inflection point.

The question is: President Trump’s obnoxious style, his incalculability and his unreliability – are they a temporary detour or, horrible thought, likely to become a permanent fixture of US foreign policy? While Europeans expect his ghastly style to disappear with him, they are by no means sure that the basic thrust of his approach will vanish as well.

Pessimists in Europe assume that America’s inward turn will continue. In 15 to 20 years, whites will be a minority, they point out. This will weaken ties with Europe and sap the trans-Atlantic commitment.

European optimists assume that the US pullback from the liberal world order won’t last long. They bank on the resilience and the ultimate rationality of American voters. The pendulum will swing back to normal, they say. “Trump’s foreign policy will not outlast his whims,” argues Janan Ganesh in the Financial Times.

The realists are not so sure. They consider it too risky to rely on the hope that Trumpism will disappear with Trump. At any rate, for the time being they have to reckon with a president who throws out treaties, whose allegiance to NATO is questionable and who considers the European Union a “foe.”

Friedrich Merz, the chairman of Atlantik-Brücke, put his finger on the wound when he said: “We Europeans must define our role in the world without the US. To be true: It would be better if America returned to the fold one fine day, but at the present moment we can’t count on this for sure.” Merz echoed Chancellor Angela Merkel’s memorable statement: “The times when we could fully rely on one another are more or less over, so I can only say that we Europeans must take our fate into our own hands.” French president Emmanuel Macron weighed in: “The partner with which Europe built the post-war multilateral order seems to be turning its back on this shared history.” At the annual conference of his ambassadors, Macron added: “Europe can no longer entrust its security to the United States alone. Today, it is up to us to assume our responsibilities and to guarantee security – and thereby European sovereignty.”

It seems paradoxical but it is a fact: Donald Trump’s truculence is finally spurring the Europeans to action. In various fields they are stepping up to the plate. They are increasing their defense spending and boosting their military cooperation and integration. They are in the process of aligning their foreign policies – vis-à-vis the Mediterranean and Africa, but also with regard to China. Simultaneously, they are strengthening the stability of the euro and moving towards a fuller banking union.

In his last State-of-the-Union address to the European Parliament, Commission President Jean-Claude Juncker insisted, perhaps a bit grandiloquently, that Europe needed Weltpolitikfähigkeit, the capacity for world politics. He is right, of course. And while it is undeniable that Europe won’t get there quickly, at least it’s on the move.

Europe won’t cut loose from America. The goal, in the words of German For­eign Minister Heiko Maas, is a “balanced relationship,” a relationship in which the US can no longer push Europe around by the exterritorial assertion of its sanctions policy, by weaponizing the dollar or by its Liebesentzug – withdrawal of affection – regarding international institutions. Maas wants Europe to act as a “counterweight” to America, capable of defending “red lines” crossed by Washington. Like Juncker, who finds it ridiculous that Europeans pay for their Airbuses and 80 percent of energy imports in dollars, he wants to install independent payment channels outside the Swift system. Beyond that, forging an “alliance for multilateralism” is one of his principal projects.

Yet the minister also says: “We are still close to each other.” To manifest this closeness and to rescue it into the future is the central purpose of Deutschlandjahr USA. Maas was deeply touched when during one of his recent trips, a young GI pulled him aside and implored him: “Please, don’t abandon America.” Germany is not going to abandon America. But it devoutly wishes that America remain true to itself.

This paper was founded in 2004 at a time when German-American relations were at their lowest point after the end of conflict between East and West. The bone of contention was George W. Bush’s Iraq war, started on the basis of lies and self-deception. We raised our voice in order to bridge the profound gap. It worked.

Today we raise our voice again. Our purpose is the same as then: to save the trans-Atlantic community. It remains a vital asset not only for Europe, its security and its prosperity, but also for America’s influence in the world. Denigrating allies, however troublesome they may be at times, is the shortest road to isolation. We should all remember Winston Churchill’s dictum: “The only thing worse than having allies is not having allies.” In the same vein, Donald Tusk, president of the European Council, implored Donald Trump: “Appreciate your allies, for you don’t have many.”

We are firmly convinced that we must not let our trans-Atlantic partnership erode and silently fade away. The reasons are obvious.

First: We face a host of problems that neither Europe nor the United States can hope to master alone. The challenges of our time require partnership as a response: in combatting terrorism; stopping the spread of weapons of mass destruction, especially nuclear weapons; building peace in the Middle East; providing energy security; fighting climate change; and solving the never-ending trade disputes in a non-antagonistic way.

Second: We have more in common with each other than with anyone else. If America and Europe are to thrive in the new era unfolding before us today, they should beware of letting their partnership languish. Only together can they hope to hold their own in a world of ever more and ever stronger competing powers.

The late Senator John S. McCain was a stalwart advocate of Western unity and an unwavering supporter of the world America has inspired, organized and led for three-quarters of a century. At last year’s Munich Security Conference he made an appeal to the Europeans: “Make no mistake, my friends: These are dangerous times, but you should not count America out, and we should not count each other out.” Heeding McCain’s admonition would be the noblest way of honoring the memory of a great American and dedicated Atlanticist. 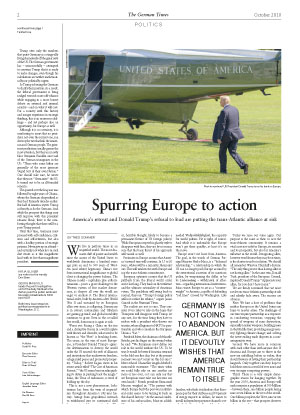