Immediately following this year’s Munich Security Conference, Stefan Kornelius, a commentator for the Süddeutsche Zeitung, reflected a growing concern felt by observers of Germany and many conference attendees regarding the political situation in Germany: “Is the anchor of Europe, the lighthouse of freedom, the savior of the West on the verge of becoming a new Trumpistan?”

Some spoke of what they saw as Weimar-era conditions on the horizon, that is, a further fragmentation of the party system similar to what occurred in Germany between 1919 and 1933. Following World War I, the country found itself in a situation that led to a string of new coalitions, followed by the rapid collapse of each new government alliance and, ultimately, to the fatal hope that an authoritarian, nationalist government formed by the Nazi party would be able to re-establish a sense of order.

Are these fears justified today? It would certainly appear that the last remaining Volkspartei, or big-tent party, the Christian Democratic Union (CDU), is now heading for an implosion similar to that of the Social Democratic Party (SPD) in the past several years. The most recent evidence of this came last month in Thuringia, when CDU deputies joined with the right wingers from the Alternative for Germany (AfD) to elect a 5-man faction from the liberal FDP party to the office of Minister President of that state. It was a regional political fiasco with far-reaching consequences for the whole country.

It has become clear that a small but potentially growing segment of the CDU has found common ground with the AfD, not only in the states of the former East Germany, and is now willing to engage in talks with their counterparts in the AfD as to where cooperation might be possible. In line with the AfD’s parliamentary group leader in the Bundestag, Alexander Gauland, this small group of CDU representatives is of the opinion that it is “completely nonsensical and unrealistic not to want to work with the AfD in the long run.”

In Thuringia, politicians such as the state’s recently resigned CDU chairman Mike Mohring have openly considered the option of cooperating with the left-wing party, Die Linke. But the current CDU party leadership at the federal level remains steadfast, insisting that both options are out of the question. In other words, the party is sorely lacking a compass.

In the wake of this embarrassment, the CDU’s poll numbers have gone from bad to catastrophic. The federal party leader had to resign and the party seems to be breaking up into a Christian-liberal faction and a so-called conservative wing – the latter comprising those who, just like the AfD, reject Merkel’s liberal politics, particularly with regard to the environment, refugees and gender policies.

Today, the number of voices insisting that Angela Merkel should be held responsible for this misery is on the rise. Calls for the chancellor to resign and for elections to choose a new candidate to take over the CDU party chairmanship and the chancellor candidacy in the next election are getting louder and louder.

How did it come to this?

Back in 2015, the AfD and its supporters were already chanting “Merkel must go!” At that time, the economy was stable, Merkel had stoically steered Germany through the financial crisis and the CDU was polling at more than 40 percent. “Then came the refugee crisis, and with it, the beginning of the decline of the CDU,” noted Nikolas Busse in the Frankfurter Allgemeine

Sonntagszeitung. Merkel’s successor, he argued, “would certainly not be able to avoid distancing themselves from Merkel on the issue of migration policy.”

But this approach is too one-dimensional. The reasons why an apparently growing segment of the population no longer trusts Germany’s more established parties are much more diverse.

Surveys have shown that roughly half of the citizens living in eastern German states are only “in part” satisfied with democracy; the rest indicate that they are much more dissatisfied than satisfied. And the cause of this goes far beyond the refugee policy.

Why does an increasing number of Germans refuse to trust the country’s tried and tested political battleships? Their answers to this question are many, varied and have little to do with foreign policy.

First and foremost, citizens in the eastern states, that is, in the former GDR, sense that they were hoodwinked by the Cold War winners in the West and continue to feel patronized to this day.

Second, the working population has a sense that the burdens and jointly produced earnings in their economies are no longer being fairly divided in a globalized society that they see as beholden solely to the laws of business and competition.

Third, every fourth worker is at risk of poverty and a quarter of pensioners are barely making ends meet.

Fourth, a significant number of Germans have the impression that their worries and fears are brushed aside and that the realms of media and politics are dominated by issues they consider to be of secondary importance.

Fifth, they have the feeling that when they disagree with prevailing narratives, they are labeled right-wing extremists and relegated to the corner of the classroom like a scolded pupil.

Sixth, when using terms such as “homeland” or “patriotism,” they are also suspected of being right-wing nationalists.

Seventh, they see their elected representatives as more interested in fighting over status and positions than focusing on content. These leaders project a preoccupation with securing their own privileges and digging moats around their own posts, preferring to hide behind rhetoric rather than to speak plainly.

Eighth, they are frustrated when promising and committed young professionals who dare to raise their voice to speak their minds and defend their ideals are degraded by the establishment.

The two historical big-tent popular parties, the SPD and the CDU, have become soulless vessels. The CDU has misplaced its traditional beliefs and forgotten its conservative, bourgeois raison d’être. The Christian conservatives have surrendered to the Zeitgeist, abandoned old principles and set out in search of the so-called center. As a result, the very thing that controversial and far-sighted politicians from the last century, such as Franz Joseph Strauss, had warned of has come to pass: a party in Germany has emerged to fill the gap left open on the right. And this phenomenon is only partly a consequence of the refugee crisis.

On the other side of the center, the past several years have made it clear that the SPD no longer knows where it stands and to whom it owes allegiance. The people it should be speaking to are those voters who actually keep Germany’s social democracy functioning with their hard work: the manual and clerical workers and their families, the people who pay their rent but can hardly make a living despite working full-time. Instead, the SPD has been serving merely to help fill the pockets of those individuals the party used to disparage as “capitalists.” Their attempts to imitate the Greens on climate policy and gender issues have simply not gained purchase. Today’s voters have turned to the original source of those issues, the Greens, who are already harboring hopes of having a voice in the next coalition government, in 2021 at the latest, and perhaps even the top spot in the country.

The SPD is moored at 15 percent in the polls. If the CDU wishes to avoid this fate, it will have to make a directional decision: Who will lead the party and who will vie to be chancellor?

The focus is on three candidates. Friedrich Merz, a man with close ties to the business world, has challenged Merkel on several occasions in the past 20 years. He is said to have a significant fan base and could win back voters from the AfD with his right-wing conservatism. Also in the running is the down-to-earth Armin Laschet, the current minister president of North Rhine-Westphalia and someone considered to be both a moderate and a moderator. In the past, Laschet has dared to entertain the idea of the Greens as potential coalition partners and has always endorsed Merkel’s refugee policy. And finally, Norbert Röttgen has entered the race. The boyish-looking 55-year old hails from the liberal wing of the party and was once one of Merkel’s first lieutenants. He then fell out of favor and remade himself as a foreign policy expert. Just like Laschet, Röttgen is expected to welcome working together with the Greens.

Still, at the 2020 Munich Security Conference, even Laschet dared attack the chancellor for her hesitant stance regarding Macron’s plan for a common European security policy, noting that “in the era of Helmut Kohl, the major European initiatives came from Germany.”

Weimar or Trumpistan? The CDU faces a crucial test. 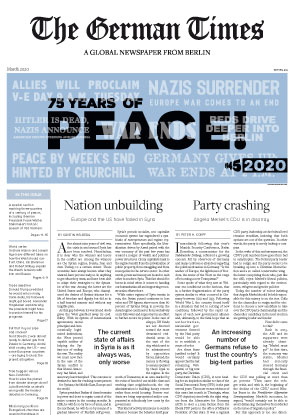