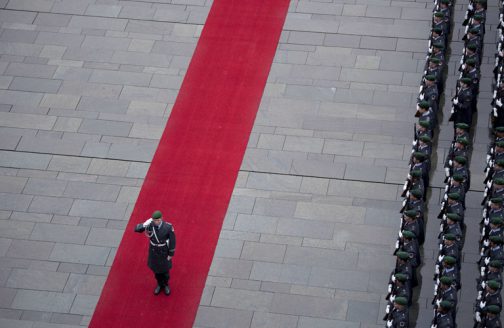 Annegret Kramp-Karrenbauer, the CDU’s brandnew chairwoman and a leading candidate to succeed Angela Merkel as German chancellor, has already started taking warm-up laps. At the recent “Denk ich an Deutschland” conference organized by the Frankfurter Allgemeine Zeitung and the Alfred Herrhausen Gesellschaft in Berlin, the former minister president of Saarland mused aloud about the manufacturing of a European aircraft carrier, stating that such a project would give expression to the European Union’s role as a global security power.

Statements like these not only sound resolute, they also fit perfectly with the style we’ve grown accustomed to hearing from German chancellors, foreign ministers and defense ministers at international conferences and in televised Sunday addresses. On these occasions, politicians profess that Germany is both willing and eager to take on more defense and security-related responsibilities, and that they are poised to do just that.

Tangible reality, however, always looks a bit different. And nothing illustrates Germany’s apparent schizophrenia better than the above-mentioned statement by the new CDU chairwoman. While she spins a tale about a potential joint aircraft carrier, Germany’s navy – like all other branches of the German military – continues to struggle with glaring failures and default rates among its main weapons systems. The fact that not one of Germany’s once-famed U-boats was able to leave port over the course of many months is only the tip of the iceberg; in the summer of 2018, barely one-third of the U-boats were available for exercises or missions.

In early 2019, the Bundeswehr’s general inspector Eberhard Zorn announced that the regular report submitted to the Bundestag by the German Defense Ministry will henceforth be classified as “secret.” And yet, according to figures from parliamentary circles, the Bundeswehr’s numbers have by no means improved substantially. In addition, the labor market where the Bundeswehr is now obliged to find its young talent has been virtually swept clear since compulsory military service was tossed out almost overnight in 2011.

In this new setting, the Bundeswehr, despite its considerable efforts, is simply not able to meet increasing demand. The German army currently comprises only 182,000 individuals. In the coming years, that number should actually rise to 203,000.

The massive gap between ambitious targets and reality can also be seen in the realm of defense spending. The Federal Republic remains far from fulfilling the NATO-states’ pledge to spend at least 2 percent of their GDP on the military by 2024. However, it should be noted that expenditures for the military sector in Germany have grown significantly since Russia’s annexation of Crimea and the outbreak of war in Eastern Ukraine. For the current fiscal year alone, Germany’s defense budget rose by roughly €4 billion to reach €42.9 billion. This is the equivalent of 1.37 percent of Germany’s gross domestic product.

Still, the turnaround in military financing – the so-called Trendwende Finanzen – called for by Defense Minister Ursula von der Leyen (CDU) is stalling before it even gets off the ground. Against this backdrop of large and fast-forming holes in the national budget, multiple attempts by national politicians to boost their domestic profile and not least Germany’s commitment to avoid any substantial new debt – a commitment now anchored in the country’s constitution – Finance Minister Olaf Scholz (SPD) is now putting the brakes on spending.

According to current plans, German defense spending will not rise to a minimum of 1.5 percent by 2024, as was promised to NATO back in December. Instead, it appears that spending is actually going to decrease again. This would bring about the exact opposite of what Minister von der Leyen had imagined for her troops. Where von der Leyen sought to achieve an upward growth curve, Scholz is planning to deliver a vertical drop.

These days, Germany’s defense minister – whose position has already been weakened by several military-related scandals – hardly seems in a position to change the course in her favor. Chancellor Merkel, too, is at the end of her long stint in office and apparently has no interest in jeopardizing her coalition’s already fragile peace in the run-up to the European elections by issuing any kind of statement on the matter.

Throughout this entire process, German politicians seem to continue to be willing to accept the fact that NATO allies, especially the United States, tend to react to German schizophrenia with a mixture of headshaking and barely concealed anger.

And there is an additional aspect to this behavior, namely that Germany’s other contributions to securing peace and international security are given little of the acknowledgment they deserve. For example, as part of Operation Resolute Support in Afghanistan, the Bundeswehr is still the second-largest contributor of troops after the US. Hundreds of German soldiers are risking their lives in Mali and also fighting against the Islamic State in Syria and Iraq. At NATO’s eastern flank, the Bundeswehr is currently leading the NATO battle group in Lithuania, and since the beginning of this year, it has also headed up NATO’s High Readiness Joint Task Force (VJTF) – of that unit’s 8,000 troops, roughly every second soldier is German.

Considering the changing security challenges facing Europe and the innumerable reports exposing the pathetic state of the Bundeswehr today, it is understandable that a majority of Germans now favor higher defense expenditures. However, there is very little evidence to indicate that a majority will emerge in the Bundestag that on its own could push through Germany’s financial pledge to NATO in the coming years. The erstwhile conservative camp consisting of the Christian Democrats and FDP has become too weak to achieve such a push. And a so-called Jamaica coalition of those two stalwarts plus the Greens would most likely lose any battle with a party deeply divided on the subject of military spending. There is no other government coalition that would pursue such a policy anyway. Both the right-wing populist AfD, on the one hand, and the SPD and Left party, on the other, are busy pursuing other interests. Indeed, military spending has long since ceased being an issue that can win votes in Germany.

In the past, the most effective means of bringing about an increase in German defense spending has always come from outside. And this is likely to be the case this time as well, whether it’s Russian saber-rattling or massive pressure from allies. In the absence of both of these, it is highly possible that Germany will break its promise to NATO – and thereby inadvertently lay an ax to the North-Atlantic alliance, just as the man in the White House on the other side of the Atlantic would apparently love to do himself. 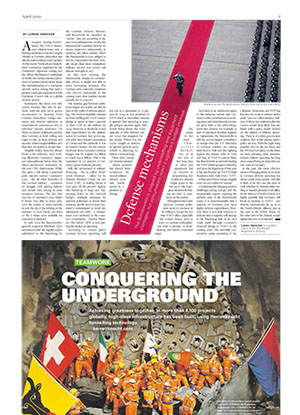