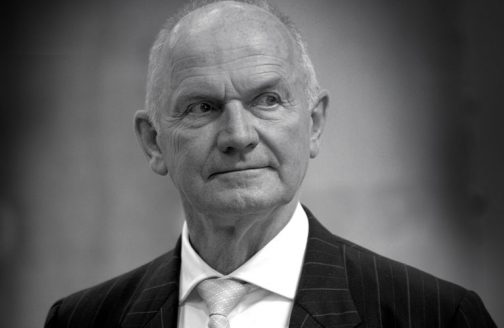 Many in the business feared him. Some even hated him. Managers tended to avoid him. Thousands of car aficionados revered him. And almost all his competitors copied him. Germany’s highest-profile car designer and business leader Ferdinand K. Piech is dead. Will the business legacy he left, now worth many billions of euros, disintegrate without him?

His fortune is tied in with Volkswagen and the families of Porsche and Piech that own it. Piech’s heirs, four women and 13 children (or 14, some have claimed), will in equal parts inherit the rights to use his voting shares in VW AG and considerable financial and real estate assets. But did Piech ensure while he was alive that his many heirs would not be able to sell their shares in the estate to buyers outside the family?

There would certainly be enough interested buyers out there in the automobile and finance industries. But Ferdinand Piech would not have been the grandson of Porsche co-founder and VW designer Ferdinand Porsche if he had not painstakingly worked out mechanisms to protect his life’s work from speculators. He put his own stamp on his huge legacy, just as he did on all his creations: his unbending last will and testament.

His colleagues and relatives in the Porsche family experienced Piech’s dogmatic rigor and obstinacy first-hand in the 1960s, when the young engineer joined the development department of his parents’ company in Stuttgart- Zuffenhausen as an ordinary designer. This did not suit the ambitious young man at all. He always wanted to be first.

It wasn’t long before young Piech had battled his way into senior positions in the development, marketing and sport departments. His Porsche cousins were left empty-handed and resigned.

It was during this time that the Porsche 917 was built. Piech, a perfectionist obsessed with details, invested energy, horsepower and endless amounts of money in the 12-cylinder racecar. His risky venture soon exploded not only the standards for racetrack safety, but also the budget of what was then still just a small racecar manufacturer in Stuttgart- Zuffenhausen.

This fight escalated into a battle royale between the Piechs and the Porsches. The quarrel ended when all the clan members, including Uncle Ferry, were forced to withdraw from the operations side of the business, never to return to management – quite a hefty price for trying to get rid of the young Piech. He never lost his love of speed, frenzy and high horsepower.

The four Porsche cousins and the head of the family were now “out.” But Piech, the “outsider,” could never be stopped from intervening in the company and taking the wheel when he thought it necessary. And this was always the case when there were major decisions to be made on the car models and top management at Porsche. This car-mad man with “gasoline in his veins” always got his way. Although he was usually in the minority position, he beat them all in the end.

This was because he pursued a clear strategy and time and again squeezed his relatives out by using his connections in the car scene. If it seemed expedient to him, he would even join forces with unionists, whom he actually loathed.

The otherwise taciturn maverick also spread useful rumors through the press to pressure people. His “counter family,” as Piech called his Porsche relatives, could not do much to thwart his intrigues.

After throwing him out of the firm, the “outsider” did not treat his Uncle Ferry with much respect. Piech always regarded his cousins as weaklings for having gone to a lax Steiner school. In contrast, he, dyslexic and a reluctant learner, endured a strict boarding school and university.

Piech won all the many power struggles at Porsche and VW, as he always presented a concept and a strategy that he was able to push through with his iron will. The Porsches and representatives of the state of Lower Saxony, who are also involved in running VW, were all left out in the cold.

His personnel policy was legendary and notable. The scenario was always the same. First, there was an outcry from all the major shareholders at his ideas, but Piech always managed to get his odd proposals accepted. One example: When Porsche was heading for the abyss in the early 1990s, Piech, to everyone’s surprise, appointed Nixdorf manager Arno Bohn, a stranger to the industry, to the top job. When he realized that his decision had been a mistake, Piech promptly had the man fired in 1992, to the astonishment of the relatives he had steamrolled.

The puppet master also had a hand in the appointment of Bohn’s successor, Wendelin Wiedeking. In 2009, however, when the successful Porsche savior became too self-confident and powerful, Piech saw to it that Wiedeking was dumped.

Piech then made Bernd Pischetsrieder, who had utterly failed at BMW, the boss at VW – with the justification that he would rather trust a man who had once made a mistake in his career than a man who had never made any mistakes. But the “car king” soon saw to it that Pischetsrieder, too, lost his job. Martin Winterkorn, a more obedient Piech protege, was the next head of VW. As soon as the patriarch felt that Winterkorn had become too autocratic, Piech disassociated himself from Winterkorn in the media, saying that he was keeping himself “at a distance.” But this time, Piech lost the power struggle. He withdrew from all his offices and retired to Salzburg. Winterkorn was soon entangled in the diesel scandal spanning the US and Europe.

Until the end of his life, Ferdinand Piech regarded VW-Porsche as the Porsche and Piech “family farm.” Since 2009, the majority stake in the huge Volkswagen Group, with its 12 brands ranging from VW, Audi and Bentley to Bugatti and Porsche, has belonged to the two clans. They also own most of the voting shares in VW.

The family has been involved in VW since 1937. Ferdinand Porsche, the founder of the dynasty and developer of the VW Beetle – the car involved in Hitler’s “Strength Through Joy” campaign – was the first and chief designer at the Volkswagen factory. His father, a Viennese lawyer and staunch Nazi, was one of the company’s top directors in the new city of Wolfsburg.

Volkswagen is today the world’s number one carmaker. Piech’s view, one shared by the third generation of heirs, was that this weighty legacy obliges the families to keep the gigantic enterprise in their hands. So far, all of his descendants have acted in accordance with this precept. For Piech, who was obsessed with technology, it was natural that he should occasionally just walk into Porsche’s inner sanctum, the development center in Weissach, and inspect the engineers’ latest creations, even when he was a top manager at Audi. Porsche was also his company, was his argument.

Shareholders, however, saw this as “industrial espionage.” At every annual meeting, they demanded that he resign from the supervisory board as long as he was the head of Audi. Piech simply smiled his demonic smile, ignored the accusations and stayed – obstinate, to put it mildly.

He showed the same lack of objectivity as the head of VW. When, for example, Eastern Europe was being opened up to Volkswagen, Audi et al. and dealer networks were being established, instead of preferring dealers from outside the family, Piech installed his own car distribution company, Porsche Holding Salzburg, in most countries from Hungary to Romania. The firm went on to become Europe’s biggest car dealer. Piech simply swept aside any accusations of favoritism. He operated and lived in a world all his own.

Now that Ferdinand Piech is gone, all efforts will be made to preserve his legacy, which will be shared by at least 14 people. This is especially the case with the voting shares in the VW Group, which are bundled in Porsche SE. These form the vital core of power in the group.

It is said that he ensured that his business legacy would remain in the Piech family by putting his 14.7-percent share in Porsche SE into two Austrian family foundations. His widow Ursula (63) and first wife Corina have double voting rights in the event of any dispute. Piech appointed Ursula, originally a kindergarten teacher who has already been active on supervisory boards within the VW empire, to be its “legitimate administrator.”

She is even allowed to change the articles of incorporation, although this is all on the condition that she does not remarry. He also left all his voting shares in the Porsche holding company, worth €1.1 billion, to his brother Hans Michel Piech (77), probably to ensure that just one man would lead the company on behalf of the Piech family.

His partner on the Porsche side is the head of that family, Wolfgang Porsche. Both are third generation. The two are already members of the highest supervisory boards in the family empire, in the Stuttgart holding company, in VW AG and in countless company subsidiaries. They are the group’s “strong men.”

These complex structures, typical for a perfectionist technocrat, may stop outside buyers and speculators from taking over Porsche-Volkswagen bit by bit. His “legacy should not be squandered,” he admonished his descendants.

The era in which a single clan member could bang on the table and run the group seems to be ending. The group will only remain strong if the families work together, so it’s a positive sign that many of the fourth-generation relatives have already taken on his responsibility and are filling key positions in supervisory boards at VW, Audi, Skoda and all the rest.

Piech’s bequest means that his family will keep control over the Porsche holding company, but only together with his “counter family,” the Porsches. 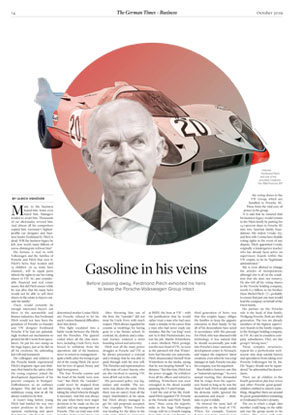