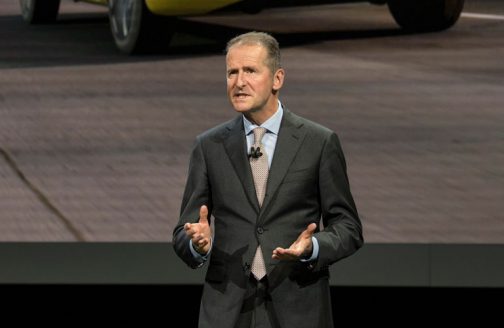 Almost four years have passed since the fall of 2015, and that moment when US environmental protection officials exposed the extent to which the Volkswagen Group had manipulated exhaust emissions in its cars, thereby throwing VW into the largest crisis in its history. Today, however, the German automaker is doing better than ever before.

While its domestic competitors, including Daimler and BMW, have struggled with losses in recent years, Volkswagen has surprised the troubled industry by showing an increase in earnings. In the first six months of 2019, the Wolfsburgbased company was able to increase its operating profits by 10.3 percent to €9 billion. Without the additional billions paid out in the diesel settlement, these results would have been ever higher.

VW is also increasingly asserting its pioneer status in Germany in the field of electromobility. In the coming year, its ID.3 is set to become the first all-electric car on the market, and the company intends to use its full force to get this vehicle to as many customers as possible. “By 2025 at the latest,” says VW CEO Herbert Diess with confidence, “we intend to be the world market leader in electromobility.”

Where is this strength coming from and how sustainable is it? The corporation has had to pay more than €30 billion in compensation and fines relating to the diesel scandal – most of it in the United States – and it is still the target of civil lawsuits in more than 50 countries.

Volkswagen will continue to operate in the shadow of the emissions scandal for some time. However, unlike at the end of 2015, the company’s very existence is no longer under threat. In fact, VW is better off financially today than ever before; it even expects to sell more than 10 million cars again this year.

This strength is due to the fact that Volkswagen has enjoyed tremendous success with its new SUV models. Whether in Europe, China or the US, demand for these sporty city-SUVs continues to grow in all major car markets. Today, one out of every four vehicles VW ships to its customers is an SUV – and the numbers are rising rapidly.

Although the higher profit margins that come with an increasing proportion of SUVs sold leads to improvements in the VW balance sheet, the sheer number of these vehicles also makes it more difficult to fulfill the EU’s stricter climate goals and avoid billions in fines come the new year. This is precisely the reason why no other car manufacturer in Germany is propelling the transition to electromobility as vigorously as Volkswagen.

Diess even openly acknowledges that VW’s behavior is a reaction to political pressure: “If we want to meet the environmental standards set by the government, and if we want to avoid paying any penalties, then there is no alternative to the electric car in the coming years,” he admits.

But Volkswagen is responding not only to political pressure from Berlin and Brussels. The government in Beijing is also setting its sights on electric cars – and China is by far the most important market for the Wolfsburg corporation. The VW logo is already on more than half of all cars sold in that country.

Diess is thus putting all of his eggs in one electric-car basket. In the next 10 years, VW intends to build roughly 22 million battery-operated vehicles on its new MEB electric platform; that’s 7 million more than promised by the planners in Wolfsburg at the beginning of the year. These electric platforms represent the means by which Volkswagen intends to achieve both higher sales and lower costs as quickly as possible.

The approach is simple: the greater the number of vehicles from the corporation’s various brands (including VW, Audi, Seat and Skoda) that are built on the uniform MEB platform, the faster the group will be able to achieve the desired economies of scale. This is also the reason why Volkswagen has opened up its electric toolkit to other manufacturers. For example, as part of its new alliance with VW, Ford is planning to build its electric models for the European market using technology from Wolfsburg.

For Volkswagen, joint ventures like the one with Ford are a new experience. For a long time, the attitude in Wolfsburg dictated that the company should manage any innovations in the automotive world alone and on its own merits.

Today, the forces of digitalization have forced VW to change its way of thinking. “The car of the future will be an extremely networked software product,” says Diess. At the moment, he notes, cars have about 10 times more software than an average smartphone.

As one of the more traditional carmakers in the industry, VW has had some major catching up to do, especially compared to competitors such as Tesla, whose cars are permanently online. In order to pull even with industry leaders, Volkswagen is now working together with global platforms like Microsoft and Amazon in the realm of fully networked vehicles.

And this is precisely where the alliance with Ford dovetails with VW’s overall strategy. While the US corporation will be able to catch up in terms of electromobility, the German automaker will be able to profit from the expertise of the Ford subsidiary Argo in the field of autonomous driving. The word on the street in Wolfsburg is that this will spur a “technical acceleration” for VW. The fusion of Argo and the Volkswagen subsidiary AID, a Munich-based company that develops programs for autonomous driving, will also lead to a situation in which Ford and VW are represented together at those locations where the world’s top engineers are developing essential components and overall systems to make robot cars a reality.

All of this is still quite a ways away. Starting next year, VW must first pass the practical test associated with its new ID.3 electric car; the company will have to see whether customers actually accept the new world of electric cars in spite of high price tags and other issues such as lagging charging infrastructure. Some managers in Wolfsburg are even saying that the diesel emissions scandal actually had a positive effect on VW, arguing that the company is now more open to change and the overall transformation of the automobile industry. And it’s true; VW is approaching the challenges associated with electromobility, networked cars and autonomous driving with a lot more vehemence and enthusiasm than others. One advantage the corporation most definitely has in this process is its sheer size. As a volume-based manufacturer that sells roughly 10 million cars per year, VW can set standards more easily than others, and thus more quickly achieve economies of scale.

Diess is confident that VW’s advantages will also soon be reflected on the stock market. He notes that Tesla, for example, is not valued on the market as an automobile company; instead, it’s seen more like the tech stocks of Amazon and Google. “The market doesn’t appear to believe that we’re going to succeed at our intended transformation,” he says. But he’s sure there will be a fundamental re-evaluation of the situation next year. Indeed, in the realm of electric cars, digitalization and autonomous driving, it’s all about investments in the tens of billions of euros; and these are costs that VW can now cover on its own, thanks to its success in the SUV business and in China. “It’s going to take a lot of patience and staying power,” Diess argues, “and a globally operating organization like ours.”

Carsten Germis
is an economics editor at the Frankfurter Allgemeine Zeitung. 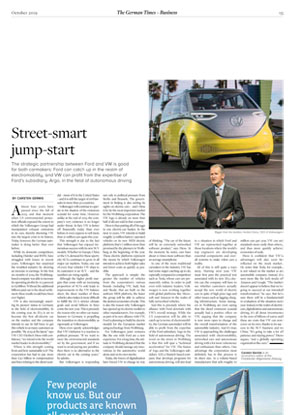