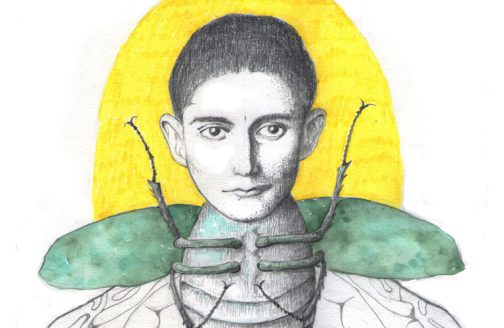 This story begins and ends with betrayal – or perhaps redemption, depending on whose perspective you take. For years, the literary legacy of one of the world’s most celebrated writers was stored in a three-room apartment in Tel Aviv and in two bank safety deposit boxes, one in Israel, the other in Switzerland. All the while, archivists worried about the condition of the papers, fearing the damage that could be done by heat, humidity, cats and cockroaches. The papers have been the subject of a lengthy legal battle.

It’s a battle over Franz Kafka’s legacy and the question of who “owns” his work. Is it the state of Israel, the country his friend Max Brod fled to from Prague in 1939, carrying Kafka’s estate in a suitcase? Is it Germany, because Kafka wrote in German and felt a deep connection to the literary canon of German authors? Or is it Eva Hoffe, the heiress to the woman to whom Brod had bequeathed the papers? It is a complicated story with many grotesque – even Kafkaesque – twists.

The journalist Benjamin Balint has written a book, Kafka’s Last Trial, about what he refers to as the “custody battle” over the estate. On June 27, 2016, Balint accompanied 82-year-old Eva Hoffe (“a pale but alert woman”) and, as he writes, he was the only journalist to observe the outcome of a trial before Israel’s highest court, a dispute that had begun in 1973.

Franz Kafka died shortly before his 41st birthday in Prague, where he was also buried. Although a prolific writer, he had not finished a single novel and his stories failed to attract much attention during his lifetime. But he didn’t seem to mind. His publisher Kurt Wolff once accused him of being the most indifferent author to the fate of his writing. Wolff asked for manuscripts – yet never received one.

The musician and author Max Brod had been friends with Kafka for 22 years at the time of Kafka’s death. Following his funeral, Kafka’s parents took Brod to their apartment to look at the contents of their deceased son’s desk and signed a contract with him to publish the works. Brod found an extensive collection of notebooks, drafts, diaries, manuscripts and letters – along with a note from his friend requesting that Brod destroy everything he had ever written. In a second note with an earlier date, Kafka specified a few works that he did not want trashed.

However, Brod neglected to carry out his friend’s wish, thus marking the first betrayal. He did not see himself as a traitor, believing instead that he was acting in Kafka’s true interest. After all, when Kafka had asked him in 1921 to burn everything, Brodt had said that he would not comply with such a request. Brod interpreted the fact that Kafka nevertheless left him his estate as an indication of his deceased friend’s will to preserve the works. If that were not the case, Kafka would have had to appoint someone else as executor of the will, as Brod later emphasized.

At the time of Kafka’s death, Max Brod was a successful author, but has since become nearly forgotten as a writer. Today, he is known as the companion, discoverer and executor of Franz Kafka’s estate. Throughout his life, Brod sought to get Kafka published and have his genius acknowledged. He recognized early on that Kafka was a master of modernity and did his best to make his friend’s writings accessible to the world. It is difficult to say exactly how much Brod was in Kafka’s works, Balint writes. It is clear, however, that he edited Kafka’s texts before he published them.

In 1939, Brod had to flee from the Nazis. He asked Thomas Mann for help and offered to come to the United States with the estate and continue looking after the papers in California. In return, he requested a residence permit and employment. Mann did indeed secure Brod a job – but the news arrived too late. Brod was already on the run to Palestine, with his wife and Kafka’s estate. Shortly thereafter, Brod’s wife died and he made friends with a married couple named Hoffe. Following the death of her husband, Esther Hoffe became Brod’s secretary, lover and literary partner over the years. Yet he never paid her a salary, writes Balint. Instead, he left her Kafka’s manuscripts to do with as she pleased. As she pleased? The state had its own demands.

Brod died in 1968; five years after that, according to Balint, the state of Israel took the issue to court for the first time. Before boarding a plane for a trip abroad, Esther Hoffe was arrested at the airport in Tel Aviv. Security forces had feared that she would attempt to take Kafka’s manuscripts out of the country. However, a court confirmed her claim to the estate, which allowed her to auction off the most valuable manuscript in the estate. The manuscript for The Trial was purchased by the German Literature Archive in Marbach for more than ￡1 million.

When Hoffe’s daughter inherited the remaining manuscripts and notes in 2007, the state of Israel went to trial again. On June 27, 2016, Eva Hoffe stood before the Israeli Supreme Court and, comparing her situation to that of Kafka’s protagonist in The Trial, argued that she felt “like an animal being led to slaughter.” She could not fathom the fact that, after all these years, everything should be handed over to the National Library in Jerusalem without financial compensation. But in the end, that’s exactly what the court ruled. For its part, the German Literature Archive in Marbach had already withdrawn from the trial so as not to be accused of appropriating Jewish national heritage.

The author of any other book might be criticized for not taking a more definitive stand on a complex issue. Not so with Balint – his restraint is one of the book’s strengths. He describes the case in its Kafkaesque twists and turns. This includes the story of Hanser publisher Michael Kruger, who, in an effort to obtain Kafka’s papers, allegedly sought to pay a lawyer in Zurich a sum of DM 100,000 just to get a glimpse of the texts. While Balint clearly expresses sympathy for Eva Hoffe, he also seeks to appreciate the arguments demonstrated by the state of Israel.

Following the court’s verdict against her, Eva Hoffe was awash in despair. She then sued – in vain – Israel’s Ministry of Justice. Feeling as though she had been betrayed and deceived, she told Balint it felt “as though I’d been raped.” Retiring from the limelight, Eva Hoffe fell ill with cancer and died in August 2018 at the age of 84. In September, employees of the National Library entered her apartment and, according to Balint, were horrified by the “biohazard” they found. They secured 60 boxes of papers and brought 35 to the library. In December, they also opened six cash boxes at a bank in Tel Aviv. An assessment of its contents is still ongoing.

So, who owns Kafka? The estate is now to be made accessible to all through digital means. For Benjamin Balint, this marks a peaceable end to the story, his conclusion being that Kafka belongs to none of us – and all of us. 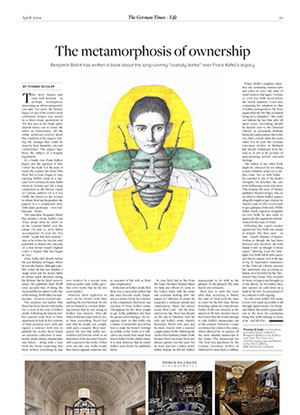