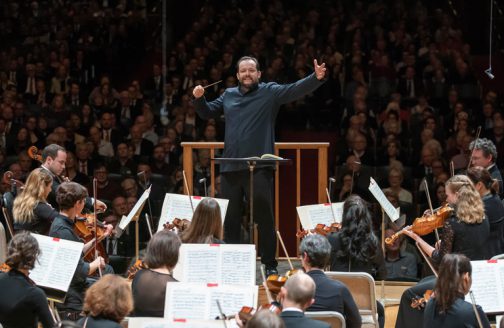 The moving atmosphere reached into the second balcony of Boston Symphony Hall. Two elite orchestras from Germany and the US have come together to create and perform music as one under their joint principal conductor, Andris Nelsons. And on Oct. 31, the audience is celebrating this thrilling apogee of Leipzig Week in Boston with standing ovations.

Among those in attendance was German President Frank-Walter Steinmeier, as the concert comprising works by Richard Strauss, Joseph Haydn, Arnold Schönberg and Alexander Scriabin also marked the ceremonial conclusion of Germany Year in the US, under the banner: “Wunderbar together – Year of German-American Friendship.” “We know that friendship is not a miraculous gift that materializes without effort. It requires attentive listening, and being sensitive to the issues others care about,” said President Steinmeier in an address to the audience in Boston. “The special relationship between the Boston Symphony Orchestra (BSO) and the Gewandhausorchester Leipzig is a wonderful example of such well-tended friendship.” In a short address just before the concert, Steinmeier recalled the fall of the Berlin Wall 30 years ago and expressly thanked the Americans for their sincere support in the process of reunifying the formerly two German states.

The cultural bridging of the Atlantic spanning Leipzig and Boston can first and foremost be credited to Latvia’s star conductor, Andris Nelsons. He began his post as *Gewandhauskapellmeister* for the 2017/18 season with his avowed goal of initiating a vibrant and creative exchange between the traditional orchestras in Leipzig and Boston, where he has worked since 2014/15. From day one he has toiled to develop a “communal spirit,” says Nelson. “We have built a unique musical family that is setting new artistic standards and with which we will move forward in unison into the future.” (See interview below.)

The close bond between the two prominent orchestras reaches far back into the past. George Henschel, the first chief conductor of the BSO from 1881 to 1884, was trained as a student at the Leipzig Conservatory. One of his best-known successors, Arthur Nikisch, head of the BSO from 1889–1893, had worked as a conductor at the Leipzig Opera before his time in Boston and then in 1895 returned to Leipzig to become Gewandhaus conductor, a post he would hold until his death in 1922. And Charles Münch, who directed the BSO from 1949 to 1962, had been the first concertmaster at the Gewandhaus Orchestra in the 1920s. But perhaps the greatest tie that binds the two orchestras is the fact that Boston Symphony Hall, built in 1900, is nearly an exact copy of the second Gewandhaus of 1868, whose unique acoustics were famous the world over. While the original in Leipzig was severely damaged in 1943 during World War II and then later demolished, a replica of its former auditory experience lives on today in Boston Symphony Hall. Wunderbar together: Two elite orchestras from Germany and the US in Boston.

For Gewandhaus director Andreas Schulz, the now reinvigorated connection between the two houses presents nothing less that a new chapter in the history of music. “For me, it is moving to witness the warm-heartedness with which the Leipzig musicians are received by their American colleagues, as well as by audiences in Boston,” says Schulz. “For the orchestra, but also for us in management, the cooperation produces many new inspirations and perspectives – something that goes far beyond these intensive one-week work periods here in Boston.”

The heart of the cooperation is the encounter between the musicians. One musician from each orchestra can become a guest in the other orchestra for up to three months. At the moment, the two flautists, Manfred Ludwig (35) from Leipzig and Clint Foreman (39) from Boston, are filling each other’s shoes. Their exchange is now about half over, and they are full of praise for having been given the opportunity to expand their musical horizons. “The two orchestras perform at slightly different pitches, which means that we flautists must correspondingly adjust our instruments,” explains Foreman. At first, this was a considerable challenge for him, which Foreman was then surprised to realize that he could quickly become accustomed to. He also enjoys the fact that, in addition to the concerts in the Gewandhaus in Leipzig, he is also asked to perform at the opera and at the cantata concerts at St. Thomas Church: “For me, these opportunities make for a terrific experience.” Meanwhile on the other side of the Atlantic, Ludwig has been impressed by the tightly structured organization of the orchestra in Boston. “There’s a very strong union here, and it is precisely observed when a rehearsal begins and when it shall end,” he explains. Beyond the music, Ludwig has been enthused by the city of Boston’s wealth of history and culture, which he is absorbing as much as he can while in the US. The only drawback? Symphony Hall does not have its own canteen or cafeteria. After rehearsals or concerts, the musicians usually just hop in their cars and retreat to their homes in the suburbs.

Foreman, on the other hand, sees his situation as a gigantic luxury, as he’s able to zip home on his bicycle in a matter of minutes. “In Leipzig, after rehearsals or performances we musicians will often sit down together or go for a drink at one of the pubs in the Old Town, which you get to know very quickly around here.” And Foreman has learned something else to boot: “At first I was somewhat irked that people here greet one another with a handshake, but I’ve since come to understand this as a very warm gesture.”

There are certain specific experiences that Gewandhaus director Andreas Schulz feels exemplify the spirit of the exchange. “When the musicians from both orchestras first convened in Boston for rehearsals, this was, for me, a truly uplifting moment,” he says. To see and to hear how the language of music transcends all borders only reinforces the feeling that the tremendous amount of preparatory work and organizational effort was worth it. Of course, music cannot solve all the problems in this world, but it can certainly help bring people together and find common ground.

Among Bostonians, the grand gesture of convening the two orchestras to unite through music was a smashing success and was received with great enthusiasm. At the two guest performances by the Gewandhaus Orchestra led by Andris Nelsons, the warm reception by the audience was almost palpable. And this excitement would ultimately carry over to the three joint concerts. “The intensity of the synergy between the two orchestras was deeply moving to witness,” said one concertgoer who has been following the BSO for decades. “I will think fondly of this very special evening for years to come.”

Three questions for Andris Nelsons, Gewandhauskapellmeister in Leipzig and music director of the Boston Symphony Orchestra:

What are the specific challenges you face in the close cooperation between two such different orchestras?

It’s only natural that cultural differences and geographic distance often lead to varying perspectives, and this is also true in terms of music. But this is what makes my work with the two orchestras so interesting and so multifaceted. The highly professional work environment we enjoy on both sides of the Atlantic as well as the splendid cooperation between the teams in Leipzig and Boston is a source of great pleasure. So, the differences we encounter while cooperating are really quite minimal.

Great orchestras comprise an international cast of characters, of course. But does the approach to specific works or to (German) composers highly vary between the US and Germany?

Each orchestra features musicians with various nationalities, which is both wonderful and rewarding. When preparing specific works, there’s an enormous degree of motivation in both Leipzig and Boston. Both orchestras combine the respect for the specific composers and works with the awareness of their own traditions and their drive to perform music at the highest level. The mentality varies, of course. I would like to conflate this duality in such a way that pleases everyone, and the musician exchanges between the Mendelssohn Orchestra Academy and the Tanglewood Music Center offer a wonderful opportunity to do so.

In your opinion, has the cooperation between Leipzig and Boston led to a sort of “communal spirit”? And if so, how would you describe it?

The special collaboration between the two orchestras has created a unique example of an innovative, forward-looking and continent-bridging partnership that shows how rapprochement can function. The two orchestras are intimately connected to each other through their shared history. The propagation and fortification of these ties offers the one-of-a-kind possibility of mutually exploring the great musical traditions of both orchestras and fostering exciting, meaningful experiences for our audiences at home and all across the world. So in this respect, we have most certainly developed a certain “spirit”: In terms of the musician exchange program and our jointly commissioned works, we have built a unique musical family that is setting new artistic standards and with which we will move forward in unison into the future.