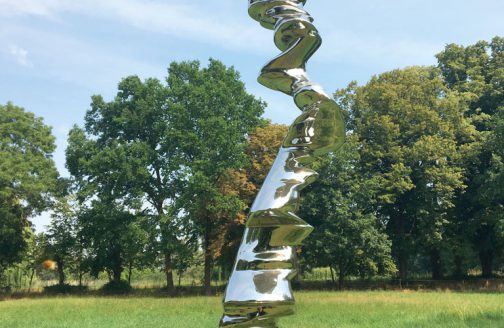 As Berlin’s erstwhile vibrant art and theater scene continues its coronavirus-induced slumber, urban dwellers are increasingly being forced to get their cultural kicks in the countryside. Especially on those warm late-summer days, there’s nothing better than trading in the hot city life for a refreshingly cool lake, a shady spot under the trees and a delicious drink with a breathtaking view. And just imagine if you could do all those things and at the same time enjoy an invigorating stroll through a landscaped garden where art and nature have entered into a harmonious symbiosis. Well, that’s just what awaits you at the Schlossgut Schwante Sculpture Park, less than one hour by car northwest of Berlin.

The current iteration of the stately manor known as Schlossgut Schwante was built in the 18th century. And the first thing visitors will notice as they make their way along the tree-lined cobblestone driveway is a small manor pond in the distance. Amid the reeds on the opposite side of the pond, there’s a glowing neon sign that reads “Everything is going to be alright.” It’s a welcome gesture that resonates with confidence and encouragement. Indeed, the pandemic too shall soon pass. And until then, we might as well make the best of the current situation.

This is exactly what Loretta Würtenberger and Daniel Tümpel have been doing in the year since they became owners of the mansion. Together, they run a company called Fine Art Partners, which provides interim financing to art dealers looking to make expensive acquisitions. Their “Institute for Artists’ Estates” also handles the estates of artists or collectors, and especially heirs in need of guidance or advice. These business activities mean that the couple is closely connected to the art world, which is where they came up with the idea to open their new residence up to art works created by artists they know. The mansion itself remains a private retreat for the family of six, but they’ve transformed the park around the home into a parcours of sculptures that invites visitors on an enjoyable stroll through their midst.

The tour begins with a clear statement: Ai Weiwei welcomes the art-loving pedestrians with a work called the “Flag for Human Rights,” which he created in 2018 to mark the 70th anniversary of the Declaration of Human Rights. When the wind blows, one can make out a footprint on the flag’s blue background – a marking designed to represent people and worldwide migration. The flag is an appeal to us all to respect and uphold the inalienable rights of every individual in the world facing persecution and fleeing wars. It is the only artwork that belongs to the couple’s private collection, and it was especially important to Würtenberger to have this flag at the entrance: “There are too many ‘Reichsdeutsche’ flags waving in Brandenburg,” she says.

All of the other artists whose work is on display were invited by the “lords of the manor” to contribute a piece over the course of the summer. These include well-known names such as Tony Cragg, whose “Elliptical Column” twirls up and out of an uncut meadow into the blue sky and shines in the sunlight. Dan Graham contributed his “Play Pen for Play Pals,” a glass pavilion that invites visitors to re-discover space and the environment in a brand new way.

Stalwarts such as Hans Arp and Ulrich Rückriem are also represented with abstract works, as are a series of artists who are less well-known among wider audiences. For example, the Japanese artist Toshihiko Mitsuya planted his “Aluminum Garden,” a shiny silver bed of flowers and blossoms that looks as if it was harvested into reality from a magical world. And Polish artist Monika Sosnowska set up her twisted steel staircase called “Stairs” – a kind of relic of a road to nowhere where the beginning and the end meet in an eerie way – between trees and bushes.

Like a meandering golf-course driveway, the spacious lawn winds its way along uncut grass, meadow orchards and patches of trees. After each curve in the path, visitors are offered new views and perspectives of the sculptures, which are carefully placed so as not to steal attention from each other. The entire area is a great place to linger, especially with the manor house in the background, a light breeze in the trees and here and there a lone pony grazing away on the grass. The glow of the late summer sun, that fresh countryside air and a quick coffee before you go – Corona indeed feels very far away.

It should be noted that the two minds behind the Schlossgut Schwante Sculpture Park came up with their art-in-nature idea before the pandemic hit. The priority for Würtenberger and Tümpel was to provide the art works with a new and unusual space in which to unfold and develop – a space that would allow them to achieve a completely different appearance than in a conventional museum. Not only have the initiators achieved their goal, they have also created a site that helps urban dwellers overcome the symptoms of cultural withdrawal that have emerged over the past several months. When it’s time to leave, it’s good to take one last look back at the lake at “Everything is going to be alright” shining from the shadow of the reeds. An afternoon in Schwante certainly helps us believe it’s true. 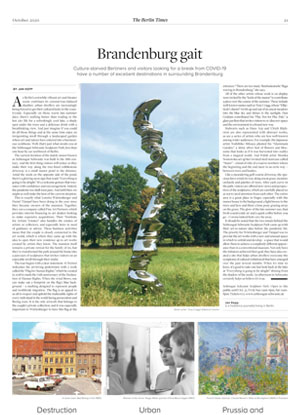