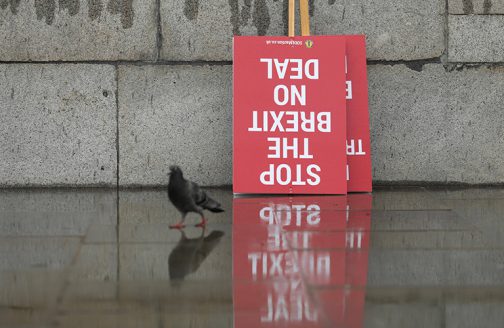 Deal breaker: On the heals of the stalled talks between London and Brussels in June, the EU and the UK ruled out an extension of the transition period beyond 2020.
IMAGO IMAGES/XINHUA

Anyone who grows up with conflict, as I did looking in on 1980s Northern Ireland from Dublin, learns not to trust calm.

The push for peace in Northern Ireland ahead of the 1998 Belfast Agreement was marred, and almost derailed, by the ghosts of 3,500 dead over the previous 30 years – and fears over unpredictable hardliners.

So, too, on Brexit: the common will for success in the transition process is overshadowed by decades of traumatic EU-UK misunderstandings and the real prospect of failure stemming from the determined Brexiteers’ transformation of British domestic politics. Their successful push for the UK to back an EU departure in 2016 opened a whole collection of Pandora’s Boxes, raising a series of political and economic questions that, four years on, remain largely unanswered.

Above all, the vote delivered a body blow to two decades of cautious peace in Northern Ireland which, like Scotland, voted to stay in the EU, but had their wish trumped by the weighted will of English and Welsh leave voters. Maintaining peace post-Brexit hinges on securing economic certainty.

The anti-climax of the UK’s technical and legal departure from the EU on January 31 started another clock ticking: an 11-month transition period during which, barring another extension, the never-ending story of Brexit will reach its latest – and apparently final – climax.

But the world has changed since the Brexit process began: global attention, and political capacity, has been swallowed up by efforts to address the COVID-19 pandemic – and to battle its worst health and economic effects.

Tackling the pandemic fallout and securing a new seven-year EU budget are the two priorities for Germany as it assumes the rotating presidency of the Council of the European Union.

Just as Berlin took over the EU reins for six months on July 1, however, Brexit roared back onto the political agenda. Several sets of talks in recent weeks – high-level political and technical negotiations – have yielded, as usual, underwhelming and almost non-existent progress. With the transition period trickling away and attention elsewhere, the specter of a disorderly Brexit is fast approaching.

No trade deal and no extension of the transition period – as the UK insists – mean that the UK’s third-country relationship with the EU is downgraded to minimum WTO trade arrangements.

Hardline Brexiteers insist this will be an adequate foundation for a new, “global Britain,” with an eye toward new opportunities in a re-ordered post-pandemic global economy.

Pessimists predict a no-deal Brexit will bring economic chaos, above all in the UK, with a particular blow dealt to the closely integrated “all-Ireland economy.”

There are four major building sites in Brexit talks at present: the so-called level playing field, fisheries, police and judicial questions, and governance.

On governance, the UK remains allergic to anything that would bind itself in perpetuity to EU regulations and the European Court of Justice; this is seen as an affront to their newly won independence. But Brussels is anxious to avoid the UK undercutting EU standards and regulations.

The UK rejects the concept of far-reaching, binding “level playing field” commitments, though its negotiators say they will agree to maintain current employment, environmental and consumer standards.

Instead, Prime Minister Boris Johnson’s government insists that being free of the EU gives it a free hand to subsidize indigenous industry if it wishes, and this must be reflected in any agreement. In other words, it is clinging to the ability to decide policy for itself without being told off for doing so by Brussels or the CJEU.

A key obstacle to a compromise is that London has yet to spell out its own state aid regime, leaving the EU unable to evaluate how a system of parallel state aid regimes would work.

A refusal by London to recognize the Luxembourg court’s jurisdiction and oversight could spill over into other areas of cooperation. It would call into question UK police and security service access to crime and prosecution databases: fingerprints, license plates and criminal records. That, in turn, could end EU access to UK intelligence resources.

In anticipation of such standoffs in transition talks, the EU insisted that arrangements for Northern Ireland would not be a negotiating chip in trade talks. They pushed for London to agree to a special protocol to that effect in its EU withdrawal package.

The Northern Ireland protocol aims to avoid the introduction of a hard border on the island of Ireland, but not everyone in Dublin is confident London will honor its commitment.

The COVID-19 pandemic has not helped matters either. For weeks, talks that would otherwise have taken place in person were shifted online, which severely limited the possibility of informal asides between rounds.

As veterans of the complex and, charged 1998 Good Friday peace talks remember, using breaks to take nuanced and unofficial soundings in the corridors is as crucial as any meeting-room talks for making possible the seemingly impossible.

The Brexit talks have, in the home stretch, gained in the person of an experienced crisis broker.

German Chancellor Angela Merkel is coming to the end of her political career after 15 crisis-wracked years in power, snatching success from the jaws of defeat in banking, currency and refugee crises.

Fate has presented a final – and perhaps the greatest – test of the “Merkel method.” Faced with a seemingly intractable problem, the trained physicist likes to break it down into a series of smaller challenges. With an eye for detail, she solves the individual components and then attempts to reassemble them into one, hopefully resolved whole.

She is not directly involved in Brexit talks, which are led by the European Commission. But if – as is likely – the talks come down to another late-night session in Brussels, the German chancellor is the person you want in the room.

The UK favors a series of pragmatic agreements, in particular on the many outstanding issues; the EU wants Brexit regulated by one, far-reaching treaty that anticipates future problems with resolution mechanisms, in order to avoid an endless cycle of claims and counterclaims.

As the curtain rose on the Germany’s EU Council presidency, Merkel warned that all EU members must prepare for the possibility that talks with Britain on their post-Brexit relationship could fail.

“I will keep pushing for a good solution, but the EU and Germany, too, must and should prepare for the case that an agreement is not reached,” said Merkel in an address to the Bundestag.

She is well aware that success – or failure – to agree on an orderly departure from the EU will color her legacy. But the consequences for the UK are even more grave, she warned in a newspaper interview, and the UK would “have to live with the consequences” of a no-deal outcome.

What for her was a logical statement of fact was seized on by hardline Brexiteers, citing her words as apparent proof of European ill will towards the United Kingdom.

As the fourth anniversary of the Brexit vote came and went, the Brexiteer narrative is already gearing up to frame any failure of talks – and a subsequent UK economic meltdown – as a final act of revenge by the bloc it left after 47 years. But not all UK voters are likely to swallow that narrative. In fact, on Brexit, a majority seems to be suffering buyer’s remorse.

The European Social Survey (ESS), a pan-European poll carried out every two years, suggested that nearly 57 percent of UK voters would now vote to remain in the EU, up seven points since 2018, while the Leave camp has shrunk to 35 percent. Four years in, both sides admit “serious divergences” remain in EU-UK divorce talks, and senior officials will sacrifice their summer vacation to get a deal over the line. Things may still seem calm on Brexit, but the calm is not to be trusted.

Derek Scally
is the Berlin correspondent for The Irish Times. 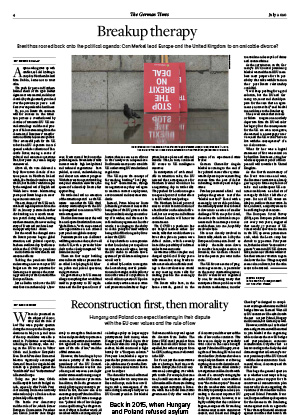