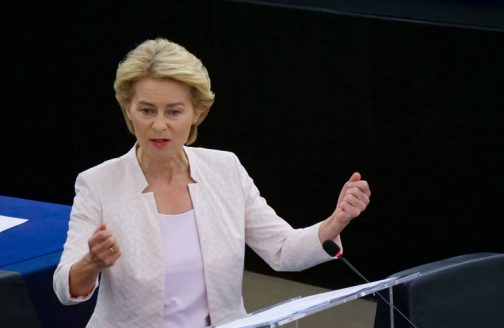 When Jean-Claude Juncker assumed leadership of the European Commission in Brussels in autumn 2014, the world was more or less united; Washington and London issued good tidings, not stink bombs. And Juncker could rely on German Chancellor Angela Merkel, who was at that time riding the height of her power.

Five years later, Juncker’s successor, Ursula von der Leyen, faces an entirely different terrain. The economic situation has worryingly deteriorated as the US-Chinese trade war and the looming hard Brexit have stirred fears of a recession. The West is in crisis; Washington and London are no longer reliable partners. Even Merkel is showing signs of weakness.

But von der Leyen appears undaunted. In mid-July, as part of her campaign speech in the European Parliament in Strasbourg, she only touched on the problems and risks she would face. Her focus lay on opportunities and promises: “Anyone that is with me in wanting to see Europe grow stronger and to flourish and blossom can count on me as a fervent supporter.”

Awaken, not abandon – that was the message. Europe must trust its own strengths and assume more responsibility in the world, the incoming commission president urged. Above all in terms of climate protection, von der Leyen wants to lead the way. In the first 100 days of her term, she will propose a statute that will make Europe the first climate-neutral continent by 2050.

She is also proposing to transform the European Investment Bank into a Climate Bank. A “Sustainable Europe Investment Plan” will underpin investments to the tune of €1 trillion over the next 10 years. With this move, von der Leyen would build on the Juncker Plan – which has been sponsoring investment since 2015 – and thereby burnish her green image.

Another of her emphases will be foreign and security policy. The former German defense minister has pleaded for an “army of Europeans” that can allow the EU to intervene militarily when necessary. Furthermore, she speaks in favor of majority decision-making in matters of foreign policy. Still, she argues, resolutions concerning “dangerous” missions should be ratified at the national level.

Another von der Leyen promise is to expand upon the Juncker idea of a European Pillar of Social Rights as well as the promotion of democracy and equal rights within the EU. In this vein she is urging the adoption of a “fair minimum wage” in all member states of the EU as well as a proposed European Unemployment Benefit Reinsurance Scheme that would help financially unburden states in crisis. She also announced that her team would comprise an equal number of men and women.

However, implementing this highly symbolic promise has already proved vexing. Only two EU member countries have fulfilled the requirement of putting forward one man and one woman for the new commission. After the first nomination deadline expired, men still constituted a majority. Von der Leyen then felt forced to keep the provisional list under wraps – and to call for further nominations.

Yet the gender parity issue may still turn out to be her easiest task. It may prove more difficult to assign the new commissioners their posts. Von der Leyen must tread lightly not only around the heavyweights Frans Timmermans and Margrethe Vestager, her recent rivals who are still in the game and are demanding first-rate appointments; she must also appease the governments in Warsaw and Budapest, which expect something in return for lending her their votes.

It is also necessary to make a number of strategic preliminary decisions: Should the responsibilities for the economy, investment and climate be merged to facilitate implementation of the promised Green Deal? Or would it be more effective to distribute the weight of these important departments across several shoulders? Does the European Commission need a defense commissioner – which would be a first – or should such responsibilities fall to Josep Borrell, the new High Representative of the Union for Foreign Affairs and Security Policy?

The awarding of posts is expected to result in a heated tug-of-war. But even if von der Leyen succeeds in solving the unusually complex personnel puzzle and establishing gender parity within her team, she will not yet have reached her goal – first come the hearings at European Parliament, whose members must approve the entire new commission, and could use the hearings to shoot down individual candidates.

In light of the modest majority enjoyed by her party, the European People’s Party, which won the closely contested July election that landed von der Leyen in her new job, the process is fraught with risks not only for the commissioners, but their boss as well. She can ill afford a “no” for her team; this would further undermine its already weak legitimation in the wake of the wrangling during the European election. Consent from Europe’s heads of state and heads of government is not enough; the new commission must also receive the backing of the European Parliament.

In Brussels, therefore, the conventional wisdom is that von der Leyen will make overtures to her critics, the Social Democrats (SPD) and the Greens, as European Council President Donald Tusk has suggested. Jens Geier, the head of Germany’s SPD delegation to European Parliament, is demanding concrete social policy plans; the Greens, for their part, are applying pressure on climate issues. And all the while, the commission president must also cater to the conservative and liberal camps in her own party.

This is no small balancing act, and it comes at a difficult time to boot. It is already foreseeable that the start of the new European Commission will be overshadowed by Brexit and fears of further crises. The UK is slated to leave the EU on Oct. 31, one day before von der Leyen takes office. But what happens in the event of a hard Brexit? Or even another postponement?

Under the current constellation of factors, so say insiders, nothing at all is certain – not even that the new European Commission will begin on Nov. 1. Perhaps as late as Christmas? And perhaps the prime focus will not be the climate, but rather the economy, as was the case five years ago at the start of the Juncker Commission. But there is one thing that is indeed certain: the notion of an ideal world is gone for good, even in Brussels. 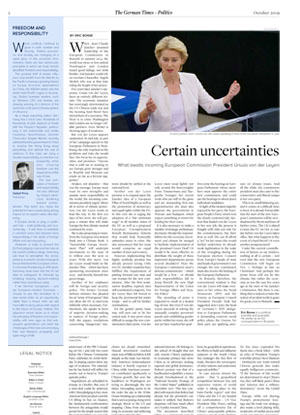