Among the tectonic shifts in international relations that both analysts and policymakers have been trying to make sense of over the past years, there is one that deserves particular attention. The departure of the United Kingdom from the European Union – Brexit – that took effect on Jan. 31, 2020, marks a turning point for Europe.

In the future, historians may look back at 2020 as the year in which European integration – the main process behind which Europeans had rallied their economic and political aspirations for more than half a century – became a contested idea. With the departure of its third largest member state, the union of 27 was suddenly faced with a serious competitor in its immediate neighborhood. London, in embracing the monumental task of creating wealth and prosperity for its citizens outside of the Union, had no choice but to adopt a resolute approach.

This approach included not only the rejection of the “level playing field” that the EU insisted on in subsequent negotiations over its future relationship with the UK. London also substantively invested in its networks across EU countries, thereby doing its part to impede cohesion within the EU. At a time when the direction and depth of European integration had already become contested within and between EU countries, the UK found partners in spirit across Europe – a state  of affairs that further alienated Brussels policymakers from the UK. As a consequence, the Channel widened and it became almost impossible to bridge the growing gaps between Britain and continental Europe.

Of course, we’re not quite there yet. And it’s true that we may not get anywhere near such a scenario. But there’s a risk that the paths of the UK and the EU27 will diverge much faster and much more markedly in the coming months than many of us would like to see. It is worth remembering that the spirit of cooperation, however imperfect, that guided relations among fellow members of the EU is unlikely to carry the day in the post-Brexit relationship between the UK and the Continent.

The EU and its members must quickly learn to see the UK as a competitor, and perhaps even an adversary at times. This does not mean that these new circumstances prohibit mutually beneficial cooperation. In fact, it might even lead to the EU and its members gaining a better understanding of their joint interests; this, in turn, could lead to a strengthening of unity among the EU27 and also help craft a new relationship with the UK.

Still, even though the EU’s cooperative approach and quest for compromise is part of its DNA, it is going to have to learn to play hardball while not falling out with London as a consequence. There is a risk of this happening, however, and one should not underestimate the sense of displeasure among Brussels policymakers at the UK’s decision to jeopardize the unity and future of the EU by means of its departure.

Certain subsequent actions from London in the months ahead could trigger a deep sense of resentment. It is thus important to acknowledge that the logic of cooperation between the EU and the UK changed significantly in January 2020.

The negotiated overall framework will determine what relations will look like in the coming years. London is determined to have an agreement on the future relationship with the EU27 in place by the end of the year. UK Prime Minister Boris Johnson has insisted that there will be no extension of the transition period beyond Dec. 31, 2020. During a visit to London in January 2020, European Commission President Ursula von der Leyen countered by insisting that it was a very ambitious plan to negotiate a comprehensive agreement in such a short time. In other words, she considered the plan to be almost impossible to achieve. Even when taking into account the fact that tactics are at play now and that the mandates for the negotiations are being hammered out, both positions are credible. The question is how much wiggle room the UK and the EU have to come up with a sound framework of cooperation by the end of the year. Brussels is rife with skepticism on the matter.

One key question for the EU is whether the unity of its 27 member states – which held so impressively, and perhaps surprisingly, during the years of the UK’s slow departure from the Union – will prevail. There is reason to think that in this new phase of the relationship, it will be more challenging for EU negotiators headed by Michel Barnier to preserve the unity of the EU.

Germany has a vital interest in keeping the UK engaged as a partner, and that interest seems to be mutual. Most importantly, on the many questions of European security in all its dimensions, it is nigh impossible to conceive of European strength without the contribution of the UK. At the same time, Berlin knows that the further London drifts away from continental Europe, the more Germany must invest in its own contributions.

In this context, the difficult relationship between Berlin and Paris provides reason for concern. The problem is not the likelihood that Paris will take a more hard-nosed approach in dealing with London in the coming months, insisting that “Brexit means Brexit,” while Berlin assumes a moderating role. This division of roles between Germany and France has become routine, and could lead to a good outcome in bringing other EU members into a compromise.

The problem stems from the fact that ever since French President Emmanuel Macron took office, the degree to which there has been disagreement between Berlin and Paris over the direction, substance and modus operandi of the EU makes it particularly difficult to conceive of the Franco-German tandem delivering a win on the post-Brexit relationship with the UK. Berlin may lean just a bit too much in London’s direction, and Paris may insist just a bit too much on seizing the opportunity of Brexit to rebuild the European Union “à la française.”

This battle of ideas between Germany and France is nothing new. When the Franco-German Élysée Treaty was put to a vote in the Bundestag in Bonn in January 1963, West German MPs, much to the chagrin of Paris, insisted that a preamble be added to the treaty that emphasized the relevance of the trans-Atlantic relationship and the wish for the UK to become a member of the European Community.

Now that the UK has left the EU and Europe is struggling to define the future of its relationship with the US, we are yet again in a formative moment of European history. While the coming months of EU-UK negotiations will center on mountainous piles of detail, they will ultimately boil down to one simple question: Will the UK and the EU still be able to collectively pull their weight in key areas of joint interest? This rather broad view may help us see the forest for the trees in the months to come.

Almut Möller
is a Hamburg State Secretary and Plenipotentiary to the German government, the European Union and for Foreign Affairs. The ideas expressed in this article are hers alone. 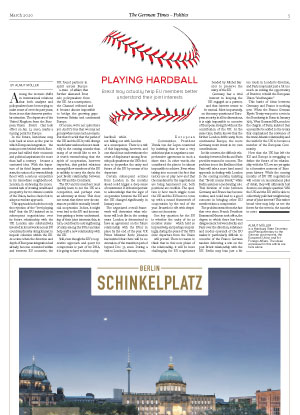