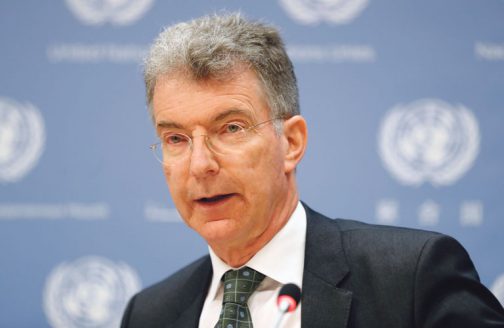 On Jan. 1, 2019, Germany took its two-year, non-permanent seat on the UN Security Council. What are your goals in the coming years?

We’re eager to make our own contribution to the regular issues on the Security Council agenda. These include giving new mandates to various peacekeeping missions and processing reports from the UN’s Special Representatives. We also want to bring our perspective into the debate on contemporary crises, including those in Myanmar, Syria and Yemen.

Do you have any particular goals?

We definitely want to accentuate our own ideas, particularly with respect to crisis prevention. The Security Council should seek to tackle crises while they are still manageable. We also intend to raise the issue of human rights as often as possible. In particular, we are going to address the issue of sexual violence against women in conflict areas, as well as the link between security and climate. Overall, our goal is to establish a broader notion of what constitutes security.

What would have to happen for you to feel like you have achieved your goal?

I would be very happy if we managed to bring a number of key crisis prevention issues to the agenda – for example, if we were able to pass a substantive resolution on sexual violence against women. Sexual violence is used as a means of warfare in many contemporary conflicts. We have to take a firm stand against this, alongside taking care of the victims and survivors and calling to account all those who are responsible.

This is the sixth time Germany has had a seat on the Security Council. What’s different this time?

The difference is that the Security Council and its underlying concept of multilateralism – indeed, our entire rules-based world order – is under attack. Russia and China have repeatedly called multilateralism into question, and now our close partner, the United States, is doing the same. According to polls, Germans view the US under President Donald Trump more critically than they view Russia or China. I’ve seen those surveys, too. But we really need to clarify that the latter are two countries that break international laws and endanger security. One example would be Russia’s involvement in Ukraine. This should worry us much more.

Still, the US under Trump continues to cast doubt on our current world order. How openly is Germany able to express criticism of the US government in the framework of the UN?

We stand for a rules-based order. This means that when the multilateral system embodied by the UN comes under attack, be it from Russia, China or even the US, we don’t seek to differentiate as to where the attack originates. When countries do not follow the rules, we criticize them. Any other reaction would undermine our credibility.

What dangers arise when the US withdraws from institutions such as the UN Human Rights Council?

We should never underestimate the impact of such behavior. The US also withdrew from UNESCO, the Iran deal and the Paris Climate Agreement, and it is no longer participating in the Palestinian relief agency (UNRWA), the International Court of Justice and the UN Global Compact for Migration. When an important partner like the US refuses to participate, it weakens the multilateral system. Plus, it makes it much easier for other countries to follow suit. Our job is to convince the US and other countries that it is in their interest to bolster multilateralism. By the way, there are situations in which the Americans are actually pushing for multilateral decision-making.

Last year, the Security Council issued severe sanctions against North Korea. That move was only possible because everyone played along. Germany now holds the position of chair of the Sanctions Committee for North Korea. The US-Americans are very grateful for that. It was important to them that multilateralism actually worked in this case.

With regard to the diplomatic confrontation with China: What, if anything, can the UN achieve in that realm?

We have to keep pressuring the Chinese to abide by international rules. When they are rebuked by an arbitration tribunal for their behavior in the South China Sea, they need to be able to endure the criticism and comply with the ruling. Also, minorities such as the Tibetans and the Uighurs in China are subject to treatment that violates the Universal Declaration of Human Rights. In this case, we simply have to call a spade a spade.

At the recent Munich Security Conference, Angela Merkel was celebrated as the quasi leader of the free world. Rightly so?

Many people see Germany’s noble intentions and say: This is a country that supports multilateralism. As the second-largest contributor to the UN system, we are well-known for following up our words with actions. People also recognize that our work on the Security Council does not involve one-sided criticism.

Financial expenditure is one thing. Still, Germany has sent no more than 600 blue helmet peacekeepers on military missions. The number of police officers dispatched to international missions is less than a hundred. Aren’t these numbers too low for a country striving to be a leader of the free world?

Germany has more soldiers participating in UN missions than ever before. We have more than 1,000 soldiers in Mali and several hundred in Lebanon. Some of them don’t count as blue helmets, but as national support forces. Germany supports the UN in highly substantial ways with these blue helmets. But Germany and other European countries cannot tackle the crises of this world merely by sending out troops on blue helmet missions. It’s more about strengthening regional organizations such as the African Union. Indeed, military means are not enough to solve many of these crises.

You mentioned Europe. Is a joint European seat on the Security Council still a goal at this point?

The president just announced Kelly Knight Craft as his choice to be the next US ambassador to the UN. What do you expect and what do you hope from her in that post?

I hope she will be someone we can really work with. And I would like for her to join us in an effort to convince the entire US that the UN is a tremendously valuable institution and that bolstering it is also in the interest of the US. 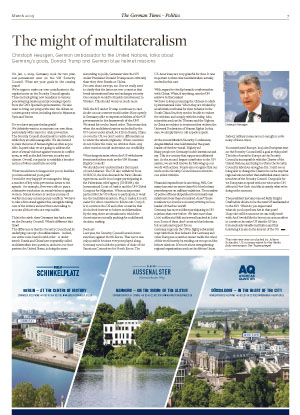