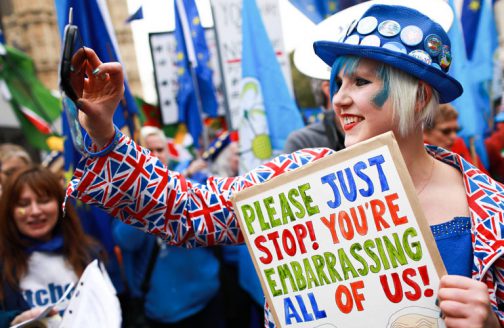 Is Brexit a wash? The question is not as absurd as it once might have been, not since the European Union heads of state agreed on April 10 to once more extend the date for the UK leaving the EU.

The chaos in London, which has caused so much headshaking and frustration on the Continent in recent weeks, has an upside: the nonsense of Brexit and the full extent of its consequences has once again been laid bare before the eyes of Britons. Now ever more British citizens are asking: What in the world are we doing?

No one wins when their country becomes a laughingstock. But this is exactly what’s happening. The Oxford historian and journalist Timothy Garton Ash sheds some light: “Brexit has made everyone crazy. It’s a national nervous breakdown.” So it’s good that the EU special summit has approved an extension of the UK’s departure date to Oct. 31, 2019. The six extra months give British politics some time to come to its senses. European Council President Donald Tusk and German Chancellor Angela Merkel entertained an even longer delay, but French President Emmanuel Macron would hear nothing of it. He fears that the poisonous British debate could cross the Channel and consume the Continent; but most of all, he would like to refocus on other, supposedly more important topics.

But a half-year is plenty of time to confront Britons – politicians and citizens alike – with the question: What is truly in the best interest of the country? Without the lies UK citizens were served before the first referendum in June 2016 – and without the broad disinterest among young voters at the time – the first plebiscite would have turned out quite differently. Today’s level of understanding of the issues is much greater, the lies have cracked and many of those who wearily declined to vote in 2016 are now highly motivated by the dysfunction of government and parliament.

The nation has peered into the abyss – and shuddered. Who today still harbors future dreams of a “global Britain”?

One great disillusionment has settled in. And perhaps this is just the right precondition to jolt some rational policy. Prime Minister Theresa May has needed almost three years to stumble her way onto the obvious path, which is to seek a compromise with the opposition over an issue of such fateful significance.

The radical principle of majority rule in British politics – winner takes all – has met with dramatic failure over Brexit. The Tories and Labour only ever search for consensus within their own ranks, never between the parties. But this time, the deep divide among conservatives could not be bridged.

At its root, Brexit was the result of the relentless power struggle between Tory opponents and Tory proponents of the EU. To resolve this conflict once and for all – in favor of the pro-EU contingent, so he hoped – David Cameron scheduled a referendum for June 2016. It was a colossal, historic and indeed irredeemable mistake.

Only now, much too late, has Theresa May sought a conversation with Labour, whose chief, Jeremy Corbyn, has his own agenda. Unlike a large segment of his party, he would also like to leave the EU, but to spare the country’s economy from suffering too gravely and losing too many jobs, he would like to remain in a customs union with the EU.

And Theresa May is now cautiously indicating that she could imagine the same. The “soft” Brexit that this would represent, supported by a majority of MPs on both sides of Commons, is thus theoretically a possibility. May could thereby still achieve the mandated exit from the EU that she has desperately been seeking for months on end, maybe by as early May 22. This would save the UK from having to participate in the European Parliament elections that begin a day later on May 23.

However, the political calculus of Labour runs counter to this eventuality. Why should Corbyn and his people help to victory a prime minister they disdain, even despise? And – as May has promised to resign subsequent to the UK’s departure from the EU – why should they help install at 10 Downing Street a different Tory who in all probability will emerge from the hardliner camp? Given these questions, it’s nigh impossible to imagine Labour helping the prime minister attain the majority she needs in Commons.

The stalled negotiations between the government and Labour are now accompanied by a political development that neither May nor Corbyn is happy to see. For the first time at least since the 2016 referendum, something resembling a pro-Europe movement is gaining steam in the UK. Around a million people took to the streets of London recently to demonstrate against Brexit. And an online petition requesting Parliament to revoke Article 50 so that the UK may remain in the EU gained more than six million supporters in just a few days.

MPs in favor of remaining in the EU have combined to form a new party in the House of Commons, The Independent Group, which includes eight former Labour deputies and three ex-Tories. The Independent Group is striving to cast the European elections – in which the UK must participate if it hasn’t yet exited the EU by May 22 – as a “soft referendum.” The pro-Europeans in the UK are mobilizing – finally.

At the other end of the political spectrum, the right-wing populists are also organizing anew. Nigel Farage, the founder of the UK Independence Party (UKIP), has introduced his new Brexit Party, raging that the political establishment has deliberately thwarted the British people’s decision to leave the UK.

Many Europeans on the Continent have grown weary of the Brexit chaos. They think the idea of a country participating in an election to a body they will soon vacate is a farce. But in fact, it represents an opportunity for something positive for the UK and Europe alike.

This election is without precedent. In the past, European citizens have found the EU elections to be a bore; but this time they sense there’s a lot at stake. Rightwing forces are mobilizing like never before, and across national borders to boot. Yet, the advance of populism and nationalism in the EU is driving centrist citizens to the ballot box in greater numbers than ever before.

British participation would heighten the importance of this election even more. It would dramatically underscore what the election is actually about: asserting Europe’s position in global power circles alongside China, Russia and Donald Trump’s America. In the election, both politicians and voters must come to terms with the harm caused by populist agitators and charlatans in all the countries of the EU, not only the UK. Seen in this light, the election could become a moment of truth for Europe.

After the delay of the UK’s exit date was agreed upon at the EU special summit on April 10, European Council President Donald Tusk warned the Britons that they now must use the time. The danger is just too great that the government and opposition – now that the time pressure has been lifted – will return to the trench warfare they have indulged in over the past months. That would be devastating.

A half-year is too little time to remedy the deficiencies of British political culture that the chaos of the Brexit debate has laid bare. But six months is indeed enough time for another calm evaluation of the pros and cons of exiting the EU. Many if not most Britons will soon realize the exorbitant price the country will have to pay.

All polling indicates that the majority-minority relationship between proponents and opponents of Brexit has flipped since the 2016 referendum. Would a second referendum – a “confirmatory vote” – deepen the divide in British society even further? Perhaps. But the vote would be the culmination of a much more thorough debate than was the case three years ago, and the public would now be informed to a degree incomparable to that in 2016. A second referendum would thus benefit from a political legitimation that is almost beyond reproach.

A British reconsideration would be in the best interest of Europe. Not only does Russian President Vladimir Putin wish to see a weakened EU; the Trump administration has engaged in a policy of open hostility towards Brussels. With a prime minister like Boris Johnson, Trump would have a united front in his campaign against the despised multilateralism emanating from Brussels. The international conglomeration of nationalists would gladly welcome the UK into its fold.

The Europeans have given the Britons a respite, and we should all be thankful that they mustered the patience to do so. For, as Philip Stephens wrote in the Financial Times, “Exasperation is not a strategy.” There’s nothing more that Europe can do for the Britons. The decision is theirs
alone.

Matthias Nass
is an international correspondent for Die Zeit 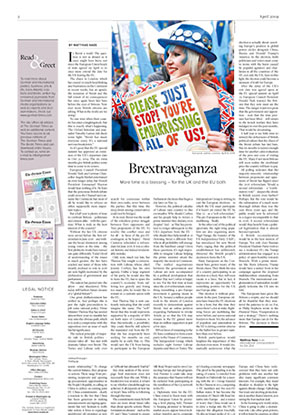