The idea of selling the European Green Deal as Europe’s “man on the moon moment” was no doubt very much to the liking of Ursula von der Leyen. She is an expert at setting the perfect stage for introducing policies with an emotive tone and professional glow. Last December, less than 14 days after being elected president of the European Commission, von der Leyen stepped up to the microphone to announce a new epoch – one in which green investments and regulations would usher in the ecological transformation of Europe. She spoke of the “mobilization of the entire continent” and called for the “decarbonization of industry and transportation,” promising at least €100 billion in new funds. The goal was to render Europe climate neutral by 2050, with an interim target of reducing CO2 emissions by at least 50 percent by 2030.

Although von der Leyen has a reputation for launching large projects without knowing exactly if or where they were going to land, her plan for a Green Deal actually came at the perfect moment, as millions of young people were taking part in the Fridays for Future demonstrations. After a somewhat bumpy inauguration, the new president – the first woman to head the European Commission – garnered respect for her latest launch. She brought a breath of fresh air to the Brussels behemoth and encouraged her officials to bundle all planned environmental, energy and economic legislative proposals together in a new package under the Green Deal banner: the ambitious climate protection law, closed-circle economies, recycling regulations, sustainable agriculture, CO2 taxation, the rededication of entire budgets, etc. The year 2020 was supposed to mark the launch of the ecological age – with Europe at the very forefront of efforts to save the planet.

Of course, everything turned out differently. And in January and February, as COVID-19 made its way from China to Europe, as the first mass graves appeared in Italy and the healthcare systems of EU member states teetered on the verge of collapse, the EU was nowhere to be seen. Each nation pursued its own course on border closings and health regulations and there were even export bans of medical goods to other EU countries. There were also ugly scenes at border crossings and loud cries from Southern Europe, which felt abandoned, especially by Germany. The number of virus-related infections and deaths skyrocketed and the lockdowns began, with each EU country fending for itself.

In those early days of the pandemic, Ursula von der Leyen had all but disappeared. “It was as if she didn’t know whether there was anything she could even do with the commission at that moment,” says one Brussels insider. After all, the EU does not do health policy, which is still the domain of each individual member state.

It was not until late March that the president emerged from her Corona shock, issuing the first guidelines for health-related border management, introducing a strategic EU stock of medical equipment and reopening the flow of goods at Schengen borders via the “Green Lane.” The European Commission also cooperated with member states to bring back 600,000 EU citizens stranded abroad and in some cases loosened EU budgetary and financial regulations for EU countries and industries. Still, the EU had not yet provided any concrete road map for Europe to protect its citizens and emerge united from the crisis.

“Europe has been ambushed by an unknown enemy,” wrote von der Leyen in the conservative daily Die Welt. Soon thereafter came the moment when the president – a passionate horse rider – took up the reins again. After Germany’s Angela Merkel and France’s Emmanuel Macron presented a gigantic reconstruction plan for Europe consisting of €500 billion in grants for EU members in need, von der Leyen added an additional €250 billion in credit for an EU recovery plan to be supplemented by the 2021–2027 EU budget with a volume of roughly €1.1 trillion.

With clenched fists emphasizing every sentence, von der Leyen passionately presented what she called a “Marshall Plan for Europe” to the EU parliament: “We will get out of this crisis together and make decisions about future investments together.” The plan would later be given the more contemporary name “Next Generation EU.”

By mobilizing this huge sum of EU funds, von der Leyen was eager to show the EU’s strength and demonstrate just how impressive Europe could be as a unit, especially vis-à-vis the US, China and Russia.

By now, Ursula von der Leyen has become the “Corona president,” despite the detailed negotiations that still must take place on the terms of funding distribution. If she manages to keep her eye on the prize and remain a master bargainer with the EU states and European Parliament, it will secure her place “next to Angela Merkel in the history books,” says Guntram Wolf, head of Bruegel, a Brussels-based economic think tank. The Brussels-born von der Leyen – a self-proclaimed “European by heart” – has reached the zenith of her career. “If things go well, Merkel and von der Leyen will go down as politicians who gave the EU a major push towards integration as a united group,” wrote the Zürcher Tagesanzeiger.

But it’s not just the European Commission that is undergoing an enormous power surge as a result of its responsibility to administer the trillions of euros set to be pumped into the EU member states. The reconstruction fund is also heralding a paradigm shift in fiscal policy that many consider to be a big bang in the development of Germany’s EU policy.

Some are calling it a “180 degree turn” and a “break with taboo.” In fact, the €750 billion package will be financed, for the first time ever, by a joint borrowing scheme managed by the European Commission – something that had been a “no go” in the EU treaty until now. “Angela Merkel is finally doing the thing that people have been expecting Germany to do for years, namely to accept a community of debt,” enthused Jean Quatremer, the veteran Brussels correspondent for the left-liberal French daily Liberation.

At the annual meeting of the elite group of French Keynesians known as the “Cercle des économistes” in Aix-En-Provence in early July, one participant described the “sacred tone” in which the macroeconomists spoke of the debt union as a wheel of history that would not be able to be turned back. Angela Merkel, on the other hand, sees it as a one-time financial move justified by the COVID-19 crisis and the potential disintegration of the EU. Von der Leyen herself attributed the abrupt shift to the fact that everyone had had “a glimpse into the abyss.”

Yet another novelty is the consent being given to the European Commission to procure its own funds on a much larger scale than before. This would mean that the Commission would be less dependent on allocations from member states, thus receiving a big push in the direction of an EU central government. Among the models up for discussion are an EU-wide digital tax, a CO2 tax and a tax on plastics. In order to be able to implement all of the plans being set up to prepare for the coming years of recession, the European Commission has already had to revise its working plans for the current year.

Behind the scenes in Brussels, policymakers are discussing how much of the Green Deal can be saved in the face of massive layoffs in Europe’s industries. Manfred Weber, head of the conservative EPP faction in the European Parliament, has cast doubt on the CO2 reduction goals included in the climate package, stating that he wants to have the economic impact assessed before his group decides whether or not to accept them. Now, the submission of the package and the analysis have been postponed until the fall of 2020.

Many of the legal projects designed to foster digitalization in Europe are also on ice, such as the analysis of the security impact of AI and the expansion of a joint EU research space. New and important guidelines for an EU capital market union and an EU money-laundering directive are still expected this year. A number of other issues are waiting to be solved, including the rule-of-law conflict in Poland and Hungary, the EU’s relationship with Turkey and China, the admission of new member countries from the Western Balkans and the EU’s policy towards Africa. Proposals for a common EU asylum law are now expected from the Commission in the fall, and the clock is ticking on a Brexit trade deal with the United Kingdom by the end of 2020.

There is one major project where all EU institutions are in full agreement: the Conference on the Future of Europe. After a delayed start in May, it is now scheduled to begin in the third quarter of 2020. For two years, EU institutions, member states, regions and civil society will discuss the future shape of the EU. The search is now underway for a leading personality to guide the process. One of the candidates is EPP head Manfred Weber, who lost out to von der Leyen in the battle to lead the European Commission. 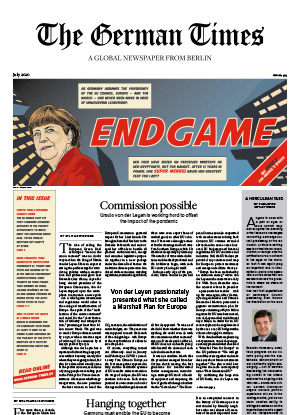