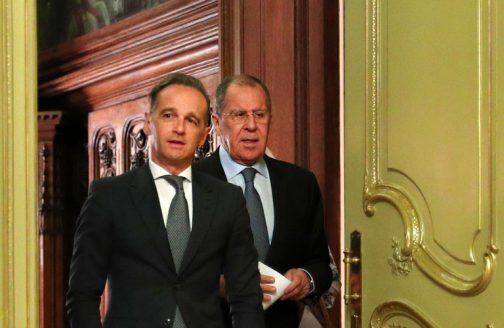 There are Russians who see German hospitals as a salvation, and there are Russians who see them as a curse. The family of Alexei Navalny, Russia’s foremost opposition leader, arranged for him to be treated at Berlin’s Charité hospital after being subject to an apparent poison attack in August. The Russian government and its media empire have cast doubt upon the findings and diagnoses of his German doctors. The Navalny case is a burden to German-Russian relations, not due to Navalny, but rather to his government

Navalny’s struggle against the toxins is not unrelated to the style of Russian leadership that has also succeeded in poisoning the country’s relationship to Germany. The list of unsolved attacks on opposition figures, critical journalists and NGO representatives in Russia is a long one:

– Five years ago, the prominent former vice-premier and liberal politician Boris Nemtsov was shot dead just outside the walls of the Kremlin.

– In the middle of Berlin’s Little Tiergarten, not far from the German chancellery, a Chechen named Zelimkhan Khangoshvili was murdered in 2019, and the federal prosecutor general is investigating circles of “Russian state officials” as possible instigators.

– The German federal government holds Russian services responsible for the cyberattacks on the Bundestag, chancellery and foreign ministry.

The Russian government contests the accusations and refuses to cooperate in the investigations. In the case of Alexei Navalny, German doctors and investigators concluded that he had been drugged with a nerve agent formerly produced in the Soviet Union. The Russian government and the doctors in Omsk have since disputed the German findings and presented numerous alternative potential causes of Navalny’s condition. Behind the competing accounts lies a deeper divide.

Germany and Russia live under diametrically oppositional systems. Germany functions by the rule of law, a system in which the government and all authorities are subjected to the same laws and to the same degree as its citizens. Russia is an authoritarian state that exploits the law and its monopoly on the use of force to dominate its citizens.

This significant contrast defines and encumbers relations between the two powers, which stand to worsen considerably if Russia were to intervene with force in Belarus. How can these two countries remain in discussions under such conditions?

It is a widely held misbelief that the Russian and German governments do not talk to one another. Countless visits between leaders of the two countries belie this notion of a diplomatic vacuum; it is often Germany that seeks out Russia. Chancellor Angela Merkel and Foreign Minister Heiko Maas were already in Moscow during this difficult year defined by the COVID-19 pandemic. They talk regularly on the phone with President Vladimir Putin and Foreign Minister Sergey Lavrov. In fact, they speak more frequently with their Russian counterparts than Helmut Kohl once did with his friend Boris Yeltsin, and more often than Chancellor Gerhard Schröder used to call Putin two decades ago. But today, Russia and Germany converse in an entirely different way.

When Heiko Maas traveled to Moscow on Aug. 11, he spoke with Lavrov about a number of topics: the murder in Berlin, the cyberattacks on the German government, Ukraine, Syria, Belarus, Iran. In response to Maas’ request for assistance in the investigation of the attack in Berlin, the Russian foreign minister responded with newly concocted counter-accusations. In the Little Tiergarten case, he argued, the Germans are obliged to show evidence that Russian state officials were involved; and as for the cyberattacks, Russia has been hacked dozens of times this year “from the German segment of the internet.” It was the first time that the Russians have raised such an accusation, and it sounded a whole lot like a tit-for-tat response.

This exchange provides a good summary of today’s German-Russian dialogue. A reproach is levied, the accused is unresponsive to the concerns of the accuser, the accused invents accusations to distract from his failings, and trust is nowhere in sight. This, of course, stems from the contrast between rule by law and rule by force, as is on full display in the Navalny case.

But it also stems from the historical reversal of the roles of Russia and Germany in Europe – the second significant contrast between the two countries. After World War II, the Soviet Union was effectively a conservative power seeking to maintain all that it had conquered or controlled. At that time, the Federal Republic of Germany was revisionist in that, although as of 1970 it accepted Germany’s external borders, it did not formally accept the internal partition of the country. Today, Germany seeks to preserve the order established in 1990 along with the Charter of Paris, while Russia is engaged in persistent revolt against this order.

Moscow sees the conflicts in Ukraine and recently in Belarus as a geopolitical struggle over the new order. Putin often ties Russian revisionism to the suggestion that it would be desirable to establish a new order in the form of arrangements and agreements between the great powers à la Yalta 1945.

The Germans, however, counter by looking to replicate a different conference from that same year, the one in San Francisco where the UN Charter was drafted. Great power agreements vs. multilateralism – this is the third great contrast in vision between Moscow and Berlin.

Many observers talk of a new Cold War with Russia, but this is a misconception. Another Cold War is as unlikely as the establishment of new Western and Eastern blocs. The world is no longer dominated by two superpowers whose ideologies collide while each establishes a sphere of influence according to its own agenda. We live amid an unstructured conflict of global and regional powers. The world is mired in a period of chaos and disorder that lacks clear orientation.

This discombobulated state of affairs paradoxically harbors the opportunity for a future German-Russian discourse that comprises more than just accusations and counter-accusations. After all, Russia and Germany – and Eurasia and Europe – will need to find their bearings between the colliding giants of China and the US.

Beyond Europe, Berlin and Moscow share several further goals. Both would like to continue the nuclear deal with Iran that the US government broke and exited in 2018. At the end of August, Moscow and Berlin united in the UN Security Council to reject the dubious US request to trigger the snap-back mechanism of the Iran sanctions. Both Germany and Russia have no interest in an American-Chinese antagonism leading to a new “You’re with us or against us” dichotomy.

And both also reject the principle of extraterritorial sanctions. For Russia and Germany, the US government’s attempt to use sanctions to force countries and companies to toe the American line is an attack on their sovereignty. Accordingly, they both are resisting the ever-new rounds of US sanctions concerning the Nord Stream 2 pipeline.

These US sanctions have forced Berlin and Moscow into a community of action. Even if many German politicians are questioning Nord Stream 2 in the wake of the attack on Navalny, neither Berlin nor Moscow is prepared to entirely abandon the natural gas relationship they have been cultivating for more than 50 years. Furthermore, Germany and Russia share a common interest in several disarmament treaties that US President Donald Trump is obliterating or that his country is abandoning. The Treaty on Open Skies is the latest agreement from which Trump is seeking to pull out. Germany and Russia want to preserve it.

There are ample topics on which Berlin and Moscow can converse and on which they share similar viewpoints. The German and Russian governments could expand upon these overlappings, in the UN Security Council, in the OSCE as well as on a bilateral basis.

But this is scarcely possible if Russia pushes the three structural differences between Moscow and Berlin to their breaking point: contempt for law vs. respect for law, revisionism vs. preservation, and great power agreements vs. multilateralism. If Russian government agencies bring their hunt for opposition leaders to the streets of Berlin or promote cyberattacks on the German government, it becomes very difficult to tackle global problems in cooperation with Moscow. And if the Russian government continues its attempt to create divisions within the EU, the German government will have to pursue the opposite strategy: to close the ranks of the EU vis-à-vis Moscow, including the use of sanctions.

Unfortunately, in recent history, these kinds of adversarial tiffs have occurred far too often. If nothing else, German-Russian relations are a story of willfully missed opportunities. 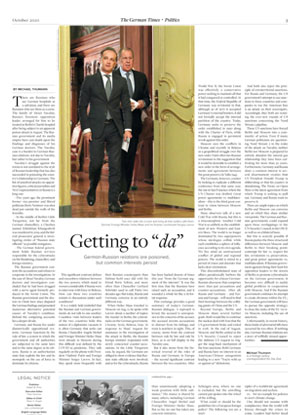