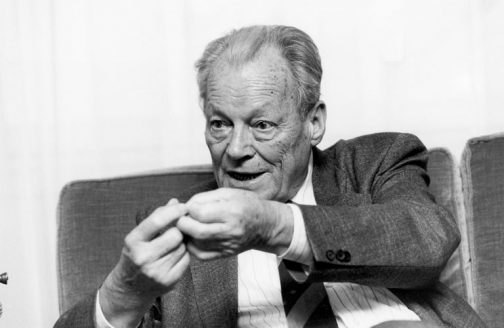 Germany’s Social Democratic Party (SPD) was never a revolutionary force but had always been party of reformers able to adapt to new social realities with legislation designed to improve people’s lives. That kind of SPD has not been seen for years.

How did this happen? By 1990, all the battles appeared to have been fought, and the political left – not only in Germany – gradually lost sight of the fact that its original purpose was to rein in capitalism and allow for more people to share in its prosperity. The political left also fell victim to the myth of the “end of history” (Francis Fukuyama). It succumbed to the liberal illusion that we were on a highway of progress (Pankaj Mishra). It let go of the “social question” and the set of economic tools it had amassed over decades that helped it resolve economic problems and stand up to the “capitalists.”

Instead, the political left devoted itself to that which Fukuyama calls “identity politics” in his new book Identity. Yet identity politics, which the political scientist Mark Lilla blames for Hillary Clinton’s loss to Donald Trump, is not really new. A good 20 years ago, philosopher Richard Rorty wrote in his book Achieving Our Country:

“Leftists in the academy have permitted cultural politics to supplant real politics and have collaborated with the Right in making cultural issues central to public debate. They are spending energy which should be directed at proposing new laws, on discussing topics as remote from the country’s needs as were Adams’s musings on the Virgin and the Dynamo.”

For Rorty, the left took a wrong turn in choosing to focus on identity politics. He called on them to instead see themselves as doers. This capacity to influence the course of developments was precisely what he believed the “New Left” had lost sight of. Instead of seeking “political change,” it sought only to effect “cultural change.”

This continues to be the case today. Expressed polemically, leftist intellectuals write lovely essays about sexual morality and wage debates over correct positions on religious and ethnic issues, but pay little attention to economics. For Rorty, the political left clearly needed instead: “To talk much more about money, even at the cost of talking less about stigma.”

Since having taken this advice to heart, the US Democrats appear to have woken up, at least from the perspective of European observers. To be sure, socialism is the wrong term to use if there’s any hope of making progress in the US. When Democratic Congresswoman Alexandria Ocasio-Cortez gushes over socialism, she means that which was once the core of European social democracy. She does not mean the “state socialism” of the Soviet Union, but rather that for which European social democracy once fought: a welfare state, fair pay, secure jobs and access to a good education.

The left must “dare more social democracy,” not more socialism. We need a return to the New Deal politics of Franklin D. Roosevelt and the philosophy of Keynesian economics in which the state played a central role. The primacy of policy should be wielded to change things for the better. Instead of relying on the market, we should intervene and invest. European social democrats would be well advised to embrace this approach. Only then can they find their way out of their present predicament.

The left should “get back into the business of piecemeal reform within the framework of a market economy,” Rorty prescribed. This was once the kernel of European social democracy. As Willy Brandt, the longtime chairman of Germany’s SPD, once said: “All who want to live securely tomorrow must fight for reforms today.”

The SPD appears to have rediscovered this taste for reform and recently presented its concept for a “Social State 2025.” The party and the entire left must supplement this with an “Industrial Strategy 2025” and a new leftist economic policy infused by debates over financial market regulation and tax avoidance. The left must dare to take on contentious issues in social, tax and economic policies.

It should not exaggerate. Its benchmark should remain the social democracy of the past, which sought to reform – not abolish – capitalism.

Once the political left again becomes a force for reform that sees its core mission in creating a socially inclusive economy, it will regain the support of the broader public and deflate inflamatory tensions in migration and integration issues.

If Democrats in the US succeed in broadly ignoring Donald Trump and manage to propose coherent social, tax and economic policies, they stand a good chance at regaining the voters’ trust. The same is true for Germans and Europeans with respect to social democracy. Those who restrict themselves to commenting on the excesses of the right have little chance of building majorities. It is not enough to say what you oppose. One must state what one stands for in order to win the support of the masses.

Nils Heisterhagen
was a policy advisor for the SPD in Rhineland-Palatinate until 2018. Last year he published Die liberale Illusion. Warum wir einen linken Realismus brauchen (The liberal illusion. Why we need leftist realism). 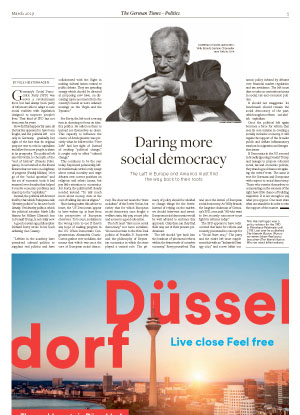