Will France and Germany be able to revive the European machine in these troubled times? On the eve of crucial European elections, the two countries sought to reaffirm their unfailing bond and renew their relationship by signing a new treaty on French-German cooperation and integration, already known as the Aachen Treaty, on Jan. 22, 2019.

Initially planned for the 50th anniversary of the Élysée Treaty in 2013, the text arrives five years late and, according to many experts, falls short, trailing far behind the resolutions that were made one year earlier in January 2018. It’s “a masterpiece of concluding statements,” joked the former Social Democratic Minister of Foreign Affairs Sigmar Gabriel. The French daily newspaper Le Monde denounced the treaty for its “lack of ambition.” Many observers expected advances in social policy, among other things. But “it is not only symbolic,” retorts Julien Thorel, political scientist at the German think tank Center for European Policy. According to this expert, the treaty improves and intensifies coordination between the two countries to avoid awkward situations such as France’s Mediterranean Union initiative or Germany’s hasty nuclear power phaseout without French consultation. Above all, this treaty could make the most of the future French-German parliamentary assembly that, even without decision-making powers, will give the two parliaments a stronger voice. Made up of 50 German and 50 French members of the European Parliament, the assembly will convene four times a year. In the words of the French-German entrepreneur Sabine Thillaye, a LaREM member of the French National Assembly and Chair of the European Affairs Committee, the treaty will “lead to a genuine culture of discussion and compromise.”

The Treaty of Aachen extends the 1963 Élysée Treaty, which sealed the reconciliation of the two former “hereditary enemies” and only saw the light of day thanks to the political will of French President Charles de Gaulle and German Chancellor Konrad Adenauer. At the center of the  Élysée Treaty was a vast consultation system between the French and German governments on foreign policy, defense and the development of youth exchanges through the creation of the French-German Youth Office. Over the years, this treaty was enriched with new mechanisms enhancing the bilateral consultation system.

The new 28-article treaty is the result of long discussions and negotiations between the two executive branches. It emphasizes the convergence of the French and German economies, crossborder cooperation and common defense and security policy – themes that were at the heart of the French president’s speech at the Sorbonne in September 2017. In it, the two countries affirm their will to strengthen the “cooperation between their armed forces in order to establish a common military culture and joint deployments,” a subject that has already received much critique. In this framework, the Franco-German Defense and Security Council, established in the Mitterrand-Kohl era, should become the “steering body for these reciprocal commitments.” In one highly symbolic promise – as it is already enshrined in NATO treaties – the two countries commit to providing each other aid and assistance, including armed forces, in the case of an attack on their territories.

During the signing ceremony, Chancellor Merkel strongly emphasized the importance of a European army. For the Germans, traditionally cautious in terms of military commitment, this marks an important and relatively new step. This path will nevertheless be paved with obstacles due to cultural and institutional differences between the two countries (in France, the president heads the armed forces; in Germany, it’s the Bundestag). In a discussion with German and French youth, the two leaders acknowledged their divergent responses to the scandal provoked by the murder of Saudi journalist Jamal Khashoggi – Berlin decided to suspend its arms sales to Saudi Arabia whereas Paris refused to so.

Another important chapter concerns the convergence of legislation on taxation and economic development. Tensions are anticipated due to divergences in the countries’ economic systems (the centralized state versus co-management) and economic progression (reduced industry and high unemployment compared to a still-strong industry and very low unemployment), which give rise to many misunderstandings in interpreting and responding to economic and financial crises. Negotiations on a eurozone budget indeed continue to be bogged down. To overcome these differences, the new treaty envisages the creation of a council of experts from both countries.

Lastly, a commitment was made to eliminate the obstacles complicating the daily lives of those residing in cross-border regions. In 2015, more than 219,000 people crossed a border each day in the Greater Region (including Germany, France, Belgium and Luxembourg) to get to their place of work. This regional integration is a way for the French-German partnership to become a true European laboratory.

To bring this text to life, a list of 15 priority projects was published immediately after the ceremony. Among them, the following stand out: increased cooperation at the United Nations Security Council, the creation of a French-German digital platform for audiovisual and informational content, the improvement of cross-border rail links and the creation of a French-German research and innovation network on artificial intelligence. The rapid implementation of these projects, especially those affecting cross-border areas, will be the best guarantee of this treaty’s viability.

As the United Kingdom prepares to leave the European Union and populism gains ground all over Europe, France and Germany must show unity, without excluding their other partners, to strengthen Europe’s voice in the world. The cancelation of the French president’s trip to the Munich Security Conference is not a good sign, even if it cannot necessarily be blamed on tensions between the two leaders. Now more than ever, Paris and Berlin must demonstrate unwavering political will.

Cécile Calla
is a Berlin-based journalist from Paris. She was a correspondent for Le Monde and editor in chief of the magazine ParisBerlin. 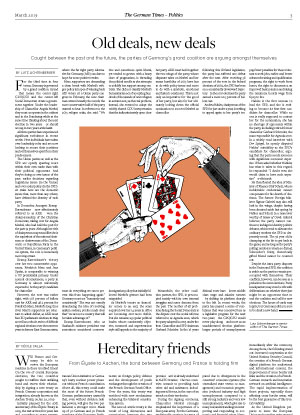