Like Moscow’s relations with the West more broadly, Russia’s ties with Germany – its most important European partner – have grown increasingly strained over the past few years. Previous hopes of Russia’s integration into a Greater Europe, from Lisbon in the west to Vladivostok in the east, have evaporated. The formerly cordial relationship between Moscow and Berlin has cooled off, as estrangement and even mutual alienation have set in. Yet, while past illusions of integration cannot and should not be revived, Russian-German relations can be made more pro­ductive. In a nutshell, Moscow needs to work with the EU’s premier economy to improve relations with Europe and partially offset the continued deterioration of relations with Washington, which have little prospect for stabilization in the next few years. Berlin has to engage Moscow to preserve a degree of geopolitical stability on the continent of Europe and to address security issues in the EU’s neighborhood.

Russia could take steps to demonstrate its willingness to de-escalate or defuse conflict situations in Eastern Europe, which would improve the climate for Moscow’s relations with Berlin. Such steps would include easing tensions in Eastern Ukraine and soothing a series of frozen con­flicts involving Moldova and Georgia. Together with Germany and the EU, Moscow could also help stabilize parts of the Western Balkans, particularly with regard to Kosovo and Bosnia. Germany would do well by not yielding to outside pressure against building the Nord Stream 2 pipeline and by staying even more closely engaged with Russia and Ukraine on the Minsk process, while reaching out to Russia on other security issues, from Moldova to Syria to Iran to the Balkans. Of course, there should be no illusions. Berlin should not expect Russia to change its general foreign policy course. Moscow needs to remember that Germany is not a stand-alone power but an integral part of the EU and NATO.

For that, both sides must capitalize on the positives and negatives of recent history. For a quarter of a century after the fall of the Berlin Wall in 1989, relations between Russia and Germany progressed steadily. Berlin tried to serve as Moscow’s guide in its efforts to integrate with the West, with hopes of creating a Greater Europe spanning from the Atlantic to the Pacific. Over time, Germany would become Russia’s most important trading and economic partner. Many German companies established themselves in the Russian market. At the same time, cultural and humanitarian ties between Russia and Germany reached new heights. Between 2.5 and 3 million ethnic Germans from Russia and other former Soviet republics, such as Kazakhstan, moved to Germany, creating a sizable Russian-speaking diaspora in the center of Europe. Subsequently, many Germans stopped seeing Russia as a threat, and most Russians started seeing Germany as one of Russia’s closest, most loyal partners. In his September 2001 speech at the German Bundestag, Russian President Vladimir Putin declared that Russia had committed itself to the “European choice.”

The 2014 Ukraine crisis, by contrast, put an end to the era of friendly cooperation between Russia and Germany, as cool diplomatic relations gradually devolved into outright alienation. Even back in 2012 and 2013, before the onset of the Ukraine crisis, Berlin had been irked by Moscow’s efforts to keep Ukraine within its orbit and integrate it into the Eurasian Economic Union, a Putin-created customs union of several former Soviet states. For its part, Moscow blamed Berlin for Brussels’ refusal to discuss with Russia the terms of the EU’s proposed Association Agreement with Ukraine. The Kremlin also accused Germany and other EU members – specifically France and Poland – of not insisting on honoring the compromise that then Ukrainian President Viktor Yanukovych had reached with the opposition in February 2014, which these three countries helped bring about. Consequently, Moscow believed these countries to be complicit in what it saw as a coup d’état that toppled Yanukovych’s government in Kiev.

It is important to remember that further escalation in the conflict with the rest of Europe was avoided in 2014–2015. Speculation about so-called Russian revanchism and the invasion threat Moscow might pose to the Baltic countries and Poland, which had been far-fetched from the start, subsided. Germany and France played an important role in reaching the Minsk agreements on ceasefire and conflict resolution measures for Eastern Ukraine. Minsk II, which Merkel and Putin were personally involved in shaping, theoretically remains the pathway to a resolution of the Donbass conflict. At the same time, it is obvious that this agreement was more amenable to Moscow’s interests, and it became clear that the government in Kiev never intended nor had the ability to implement it. Besides, Ukraine’s leaders were mostly relying on US assistance and were not inclined to respond to rather restrained German and French attempts to steer Kiev toward complying with the conditions of Minsk II.

This ongoing wider confrontation between Russia and the United States has placed Moscow and Berlin at odds with one another. Germany has not just taken part in the collective Western sanctions regime targeting Russia, but also leads and coordinates this policy within the EU. Merkel succeeded in convincing the segment of the German business community most closely involved in economic cooperation with Russia to reluctantly acquiesce to the need to pressure Moscow to change its foreign policy. Most of the German business community not involved in such cooperation readily accepted the sanctions and supported the government’s position. Many Russians initially thought that Germany’s position was mostly a product of the extremely close ties between German political, business and media elites and their US counterparts. Moscow often tends to overestimate Washington’s role in various international situations, and the opposite is also true.

In reality, solidarity with Washington was not the only reason Berlin acted the way it did. The categorical rejection of military intervention in Europe, especially territorial annexation, is at the core of post-war German identity. Germany has made some exceptions to that principle, but only as it relates to the United States and NATO (in places like Kosovo and Serbia). Evidently, Berlin tends to trust the good intentions of its senior ally and other members of the military and political bloc it belongs to, but Russia cannot count on that same courtesy.

Nevertheless, while Berlin has been a consistent critic of Moscow, Germany still engages in dialogue with its Russian peers. Amid the hybrid war between Russia and the United States, Germany has taken the peculiar position of a loyal US ally that is permitted to maintain constant contact with Russia. At an official level, the trans-Atlantic allies have the same view on Russia. But unlike the US foreign policy establishment, which views Russia as toxic and treats it as it would Iran or North Korea, Germany sees Russia as an important neighbor it must deal with. Dealing with Russia now, however, is much different from what it was even a half-dozen years ago.

Today, Moscow no longer has the strategic goal of creating a common Greater European space from Lisbon to Vladivostok. Instead, Russia should focus on building neighborly relations with Europe as it actually exists, from Lisbon to Helsinki – a Europe that, in the Kremlin calculus, will remain a junior partner of the United States for quite some time. By the same token, Germany should not treat Russia as an economically and socially backward part of Europe that must be civilized and integrated with the rest of the continent by bringing Moscow closer to EU standards. Thus, Russia should not be conceived of as the biggest part of some imagined “other Europe” that should be brought to the level of so-called advanced Europe. Rather, Russia is Europe’s largest immediate neighbor, alongside other neighbors such as the Arab world, Iran and Turkey. Berlin should certainly take Moscow into account, but more importantly, Germany should accept the way Russia is now to avoid new disappointments.

The focus of Germany-Russia interaction now should be placed on avoiding escalation in Donbass ahead of and during Ukrainian elections next year; preventing a humanitarian catastrophe in Syrian Idlib; keeping Iran within the limits of the JCPOA agreement, while dissuading the Trump administration from further provoking Tehran into a breakout; working together with the EU countries to stabilize the politico-military situation in Libya; and exploring ways for solving the conflict over Transnistria and improving humanitarian and economic ties across the lines between Georgia and Abkhazia, with its large Georgian minority. Such an agenda, if implemented, would not restore post-Cold War hopes; it might, however, lead to practical results and re-instate if not trust between Germany and Russia, which will take decades to build, then a degree of predictability and a habit of cooperation. 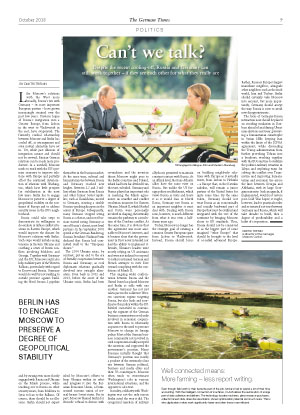