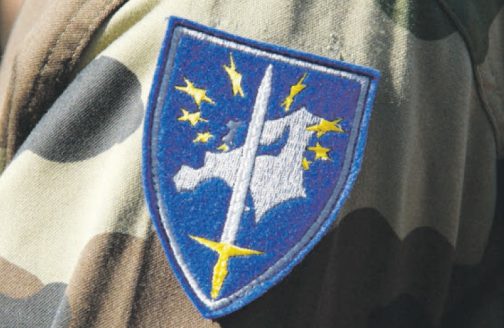 Nine months ago, most European Union member states took their biggest step yet toward a common European army. It was not, however, a moment that lent itself to easy symbolism: No common European uniform nor common weapons and equipment, nor even a joint high command. Militarily, what the EU now has is rules. They allow for cooperation between individual European states to jointly shape military facilities and capabilities.

At the suggestion of the Italian military, for example, experts from several European armed forces are developing a new armored infantry vehicle. On German initiative, six other EU countries are involved in setting up a European Medical Command to guide and ensure medical care during EU military operations, such as in Africa. Until now, all member states participating in such operations have had to renegotiate the terms for each and every new mission.

Nine months ago, EU defense ministers first agreed on 17 such cooperation projects, and the numbers continue to rise. Initial projects include the establishment of a network of logistics centers in Europe, so that each individual army, large or small, needn’t continue organizing its own foreign missions. Then there is the new military training certification center, to ensure that in the future, all armies have congruent training standards – so that, for instance, Estonian tank grenadiers receive gunnery training on a par with that of their German and Spanish counterparts.

Twenty-five of the 27 EU member states (the United Kingdom, which is scheduled to exit the EU in March next year, has already been factored out) have expressed their willingness, in principle, to join the new secu­rity project, called PESCO. The acronym stands for PErmanent Structured COoperation and has been codified and agreed upon in the EU’s Lisbon Treaty. The novelty of this cooperation – by EU standards – is that it does not involve the entire community, i.e. all EU members. So, instead of always having to win over 27 political and military decision-makers for a specific military community project, such as the development of new underwater surveillance equipment, only those EU countries interested in the new technology need convene.

In addition to the flexible PESCO framework, the EU member states have passed resolutions to further harmonize the 27 member states’ military capabilities and equipment. When these efforts come to full fruition, there may not be any single EU army, despite the recurring political demands for it. What should emerge, however, is a European defense union capable of determined and powerful military action.

The driving force alongside PESCO is the European Defense Fund, which aims to accelerate the research and development of new weapons and equipment. Starting in 2020, this fund is expected to have an annual budget of more than €1.5 billion to finance projects co-planned and registered by EU member states. One of its first projects is the development of a new, lighter, more comfortable protective vest for soldiers.

The new momentum in EU military cooperation boils down to two factors. The most important is Britain’s decision to leave the EU. Prior to the Brexit referendum, the UK always exercised its influence at EU headquarters to block progress in the common European security and defense policy. The British feared restric­tions on their military sover­eignty; they also worried that joint European forces might eventually weaken NATO. After the referendum, European military cooperation immediately picked up. In addition to PESCO and the EU Defense Fund, EU states also agreed to set up a joint military headquarters.

The election of Donald Trump gave the Europeans another reason to accelerate their military cooperation. This was not so much due to Trump’s complaints that almost all European NATO countries have inadequate military budgets, but rather, Trump’s announcements of no longer wanting to play the world’s policeman. Europeans have become even more aware that they can no longer rely on US military leadership to resolve conflicts in their neighborhood, such as the Balkans, the Middle East or Africa. They must themselves become capable of action. All EU cooperation decisions made in the past two years have served this objective.

Paradoxically, NATO has provided the biggest boost to the day-to-day military cooperation of European armies. The new NATO strategy to deter Russian aggression has spawned several new military units, such as the fast-moving “spearhead force,” available within days anywhere in the Alliance, or the forward-stationed units in Poland and the Baltic States, which have a permanent presence using rotating units.

All these new units are multinational. In them, Germans, French, Norwegians, Dutch, Spaniards, Czechs and soldiers of all other NATO countries must constantly work together at company level. This is where European military cooperation becomes a reality on a daily basis – when Polish mechanics repair a Dutch Leopard tank, or when a German battalion commander sets the operational plan for a Norwegian parachute company. 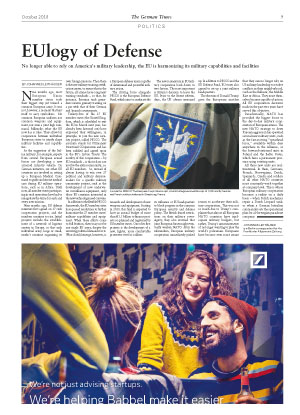