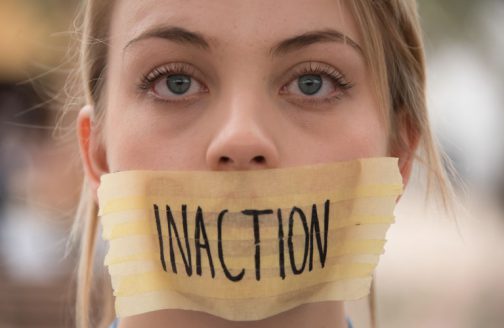 When Time magazine chose climate activist Greta Thunberg as its person of the year last December, US President Donald Trump fumed in a tweet: “So ridiculous. Greta must work on her Anger Management problem, then go to a good old fashioned movie with a friend! Chill Greta, Chill!”

Several journalists interpreted Trump’s tweet as a tasteless spin on the “Run Forrest, Run!” clip from Forrest Gump. The eponymous character in Robert Zemecki’s masterpiece has a very low IQ and is considered to be mentally handicapped. Sweden’s Greta Thunberg suffers from Asperger’s syndrome, a vulnerability that is exploited with constancy and hostility by her political opponents.

In Berlin-Mitte this past summer, four pedestrians were killed when a Porsche Macan swerved onto the sidewalk. Even before the cause of the accident was officially announced, the SUV had become a multi-ton public enemy number one. At dinner tables, in the Bundestag, at roundtables and in op-eds, half of Germany began debating a ban on sports utility vehicles in cities. In the rhetoric of climate activists, the Left, the Greens and environmental groups, these half-car-half-trucks have become “motorized murder weapons” that are “responsible for climate change.”

Automobile industry executives, conservative politicians and car fans alike are countering with warnings about thousands of lost jobs while, above all, evoking the right of older people to have a comfortable way to get around town. They detect signs of a rising eco-dictatorship out to ban cars altogether.

Ecological issues have become a key component  of a major culture war. In almost all segments of our society, climate protectors are pit against car owners, meat eaters and airline passengers. But what exactly is the nature of the problem?

As shown by its carbon countdown clock in Berlin-Schöneberg, the Mercator Research Institute on Global Commons and Climate Change now gives the world just 25 years and 8 months until the global population, at its current rate of emission, has spewed so much CO2 into the atmosphere that the much-discussed two-degree threshold will be surpassed.

The world produces 1,332 tons of carbon dioxide per second – 42 gigatons per year. These greenhouse gas emissions are caused above all by oil, coal and gas, that is, by the fossil fuels upon which the growth of prosperity and advancement of the industrial world are based. As a result of these forces, scientists predict more frequent severe storms, heat waves, drought and rising ocean levels; and these in turn will lead to hunger crises, land loss, wars and climate refugees. At stake is nothing less than a livable future for all coming generations of humans and other species alike.

Climate protection has become an existential question. It affects all segments of society and all political camps. But different groups’ perceptions of the issue vary to the utmost degree. While economic liberals, social conservatives and those generally on the right – including globalization critics, traditionalists, climate deniers, etc. – cannot or will not see the danger in it, the left-leaning cosmopolitan big-city elites have elevated the ecology issue to a matter of lifestyle and life philosophy.

This culture war is quite distinct from the emancipatory turmoil that began in 1968. Peter Unfried, senior correspondent for the left-wing tageszeitung, points out that up until now, the dynamic has been “men against women” or “heteros against homos,” that is, a disenfranchised group asserting its rights in the face of a dominant opponent; today, however, this narrative dichotomy of “us against the fill-in-the-blank” no longer holds. The old deep trenches are losing significance, as the obstacle, which was formerly “the others,” has now become ourselves – that is, Western societies that consume ever more energy in order to satisfy their ever-expanding range of needs.

With its heavy dependence on fossil fuels, the world’s growth economy is pushing its limits. At the beginning of the industrial revolution, the capitalist principle of economic growth relied on the idea that the Earth’s resources would always be available for exploitation. Today, we are faced with the challenge of developing an energy economy to replace fossil-based raw materials with renewable energy sources like wind, sun, water and biomass.

But how do we go about creating this green industrial revolution? How do we achieve the democratic majorities we need to usher in innovative social and ecological policies and industries? No one can say exactly how. Nor can we know how much it will cost. At the moment, political and industrial decision makers are under tremendous pressure to agree on innovative climate policies that produce a smaller carbon footprint, as well as alternative concepts for mobility and production and huge investments in renewable energies.

However, instead of pushing forward with these policies, all their efforts seem to go toward forging half-baked compromises to buy themselves more time, such as modest increases to air-travel taxes in lieu of introducing a Europe-wide kerosene tax or gradually decommissioning the coal industry.

They embrace the former because they fear losing votes and possibly even re-election as a consequence of the socio-economic changes that will inevitably result; and they ignore or reject the latter because of the conflict posed to their business models.

At the same time, we cannot overlook the fact that politicians are shifting the climate problem to a moral and cultural level – a phenomenon that Ralf Fücks, a Green Party politician and cofounder of the Center of Liberal Modernity think tank, calls the “privatization of the climate issue.” This trend is bolstered by the claims of many climate activists that the looming climate disaster can be mediated by individuals rethinking their habits and values.

At issue here are lifestyle factors like eating meat, fashion, driving SUVs, long-distance travel and the most extreme encapsulation of climate consciousness, “eco-Calvinism,” which preaches the renunciation of our consumer society, the abandonment of old norms and the acceptance of certain prohibitions and limitations, no matter what social disadvantages may accrue. This relocation of the climate question to the private sphere increasingly polarizes society and, so Fücks fears, could ultimately foment resignation and radicalization.

But how can the environment debate become more civil? How can we craft a rational and advisable climate policy? Climate experts like Unfried are demanding a new societal discourse that forgoes prophesying the apocalypse while constructively discussing the opportunities presented by the green transformation. It would behoove us to embrace a liberal democratic attitude bent not on dividing society with regulation overload vis-à-vis elite lifestyle questions, but on maintaining open and honest dialog.

Finally, we could all use a little humor. And Greta Thunberg has some. The young Swede countered the petulant Trump’s verbal attack by temporarily changing her Twitter bio. Under her photo she wrote: “A teenager working on her anger management problem. Currently chilling and watching a good old fashioned movie with a friend.”

Julia Boek
is co-publisher of Berlin-Wedding – The Photobook. 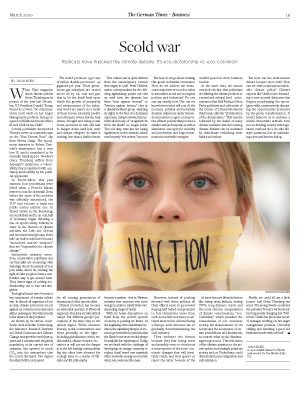