A look at Western Europe’s postwar history helps illuminate what served as its foreign policy’s point of departure in the past, and the foundation that undergirds its foreign policy moving forward. We can view the outcome of World War II as a global overthrow of Europe. In a matter of a few years, European imperialists and colonial masters found that their role on the global stage had changed completely. The power of the United States and the Soviet Union grew to such immensity that no European could hope to be more than a commentator or ally of one side or the other.

In the niche of world politics, which became the stomping ground for European foreign policy for decades, Western Europeans could experiment at least with new ideas, if not power. And this they did. Peaceful European unification was the result. In the case of West Germany, such experiments included Konrad Adenauer’s European integration and reconciliation policy in the 1950s and Willy Brandt’s détente and Ostpolitik in the 1970s. Europe’s approaches eventually brought the whole continent back to the center of world politics as the fall of the Iron Curtain and the glaring implosion of the Soviet bloc transformed the world once again. Europe, with EU enlargement and integration moving ahead, made a success of its role in economic globalization and within the existing system of international order.

When achievements are truly unique, our instincts tend to apply and reapply the underlying political strategy – perhaps until we’ve gone to the well one too many times. Since 1990, Western Europe has continued to replicate the strategies that once brought it success. The first danger that emerged was the susceptibility to error, which quickly became apparent in the former Yugoslavia. There were whole peoples who now wanted to settle old scores rather than rely on strategies for peaceful conflict resolution in the tradition of the Conference on Security and Cooperation in Europe (CSCE).

The Cold War was over, but the world had become colder. In its overconfidence – the second danger – European countries, and most of all Germany, misunderstood their traditional roles in the EU. Although the Federal Republic, in tandem with France, had previously played a leading role in the Union, at about the time of the global financial crisis in 2008, it failed to realize that it lacked a free pass to ride roughshod over its partners – even when large numbers of refugees arrived in Europe in 2015. The consequences were that Germany achieved less and less of what it wanted, and the EU lost much of its cohesion, an essential feature of its influence in the world.

This helps explain today’s measure of cluelessness at a time when Europeans, along with most of the industrialized world, find themselves confronted with nontraditional foreign policy challenges. The impact of these challenges reaches far beyond just Europe. The fragmentation of international society means that we are dealing with more actors than ever before – states, international organizations, non-governmental organizations and transnational companies. At the same time, growing segments of our publics, spurred on by the use of social media, are leaving their mark on foreign affairs (and politics in general). This presents two main threats to the EU and to the legitimacy of governance in our societies.

The first is that an increasingly fragmented world lacks orientation. In a situation in which the international multilateral order falls apart, the strong – as Thucydides pointed out – will again be tempted to do what they please, forcing the weaker to do what they must. A world without order will again be a world marked by competition over spheres of influence, which may include the use of military means. This begs the question: How can Europe maintain confidence in itself? And the answer is: Only as a unified Europe.

Europeans, when in difficult straits, love to pay lip service to collective action, to Europe-wide institutional solutions. This is often discussed today in the context of creating a European armed forces, as if it would somehow be a magic cure-all. The problem is a financial one, as it would cost more than NATO’s famous 2 percent. Yet the problem is also a political one: What member state would agree to leave decisions affecting the life and death of its citizens to others? And what if such decisions included the use of nuclear arms? Let us be frank and admit that it would be more pragmatic to make use of tools already available to defend a territory and to exert coercive influence, such as the power of a cohesive alliance and the employment of sanctions. Libya, Iraq and Iran are recent cases where they have proved effective – and a lot less bloody than bombs.

Only the influence of all EU member states acting with cohesion can make French, German or whichever member state’s foreign policy successful. This is not about stronger EU members “leading” others; it is about forging the laborious yet fruitful path toward bringing the EU countries together again. The looming danger of becoming the plaything of the divide-andrule tactics of mightier powers should be enough to bring Europeans together in the same way that the memory of war brought them together more than half a century ago.

The second threat is the fragmentation of our societies into various sub-publics. It leads down a path towards the loss of the social consensus on foreign policy that has more or less prevailed since the creation of the European Economic Community. Most conspicuous are the new nationalist and populist movements. Whether it’s former East Germans fearing migrants competing for their jobs, Brits wanting to “take back control,” or French gilets jaunes feeling neglected by their president, a similar story is emerging in many democratic countries. While the populist movements are not democratically legitimized in the traditional sense and their interests may well be directed against the interests of a majority of the population, they nevertheless represent those many citizens who feel that today’s foreign policy dictates run roughshod across national borders, affecting our everyday lives. With emotionally inflamed rhetoric, they ask what their elected politicians plan to do about it, yet the image before their eyes is of helpless bureaucrats, which only feeds their doubts of the legitimacy of their seemingly incompetent governments.

How, then, can foreign policy be conducted in ways that citizens recognize it as representing their own interests? It helps to look for answers where citizens are already involved in shaping politics. In 2015, hundreds of thousands of women and men in Germany volunteered to assist municipal institutions in coping with the influx of large numbers of refugees. This intense level of societal participation creates a dynamic inherently different from that of those much-praised “town hall meetings” or other fora that too easily smack of governmental paternalism. Laymen juries, honorary commitments in local administrations and foundations all prove citizens’ desire to share the responsibility of governance. Political institutions need to accept this desire. In turn, citizens will transcend the helter skelter of domestic politics and accept the primacy of foreign policy. This is crucial to the fate of Europe, which now must stand safely and firmly on its own feet.

Europe still has the opportunity to make good on what it missed out on. We must find course and compass to bring European nations together again for the collective project of holding our own in a world of dissolving order. Building a new social consensus on foreign policy – and perhaps on governance as a whole – is an opportunity to overcome our current cluelessness.

Volker Stanzel
a former German diplomat, is vice president of the German Council on Foreign Relations and senior distinguished fellow of the German Institute of Foreign and Security Affairs (SWP) in Berlin. His book Die ratlose Außenpolitik und warum sie den Rückhalt der Gesellschaft braucht (Rudderless foreign policy and why it needs the backing of society) will be published in April. 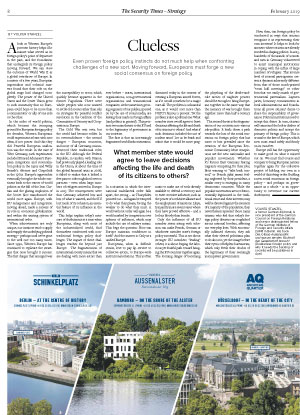