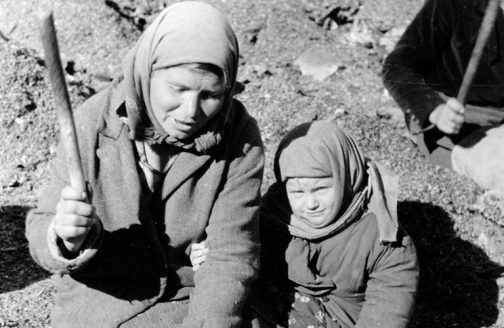 The fascists are facing their final hour. Our hearts are filled with joy,” wrote Ukrainian scientist Mikhail Usyk in his diary as the Red Army’s liberation of the city of Kharkiv in eastern Ukraine grew near. “Our own people are close. We are waiting impatiently for them, the liberators.”

Usyk had lived through the German occupation and was full of happy yet fearful anticipation. “But how are you going to judge us and our mostly forced service for the Germans?” he asked. “The provocateurs among the Germans spread rumors about the supposed terror of the ‘Reds,’ alleging that they are going to shoot everyone who worked for the Germans. Nonsense! Lies!” The people of Kharkiv and other cities had endured so much, he noted. They had learned to appreciate the merits of Soviet power. Usyk insisted his people would be “the most zealous and obedient” in the future, the best at their work. “Under German rule, the people faced starvation, lost relatives and endured physical and moral oppression. They know what slave labor means and they have endured the cold and managed without light and water.” Precisely for this reason, he argued, there had been “a palpable change in people’s attitudes towards Soviet power. There is no longer any talk of resentment against the Soviets like there was in the days when the Germans came.”

Any hopes or expectations held by Soviet citizens that the USSR would undergo a change of direction after its victory – thereby yielding to the people’s desire for more bread and additional freedoms – were soon dashed. Life after the war did not get better at first; it got worse. Most Soviet citizens continued their everyday lives in a permanent state of emergency, just like in the 1930s and in wartime, with hardship and misery now winning out over their feelings of victory in the war.

People who lived through those times recalled how immediately following the war, all conversation focused on how people were going to survive the next day. In the winter of 1946/47 there was a drought followed by another famine, which affected Ukraine and parts of Russia and claimed up to 1.5 million lives.

The Soviet Union emerged from World War II as the “impoverished victor.” On the one hand, it had greatly increased its international standing, become a world power alongside the US and recorded large territorial gains. On the other hand, it had suffered enormous losses – an estimated 26 million Soviets died in the war – and destruction on its own territory. The demobilization of the army, re-evacuations, repatriations and deportations had also set giant swaths of the population in motion. Moreover, the economic reconstruction and restoration of the social order after the liberation of the occupied territories was accompanied by various ethnic, social and political purges.

What did the end of World War II mean for the people of Ukraine? “The war has come to an end. Victory, hurray!” wrote Nina Gerasimova, a student in Kyiv, in her diary on May 9, 1945. “The long-awaited day has finally come. It is difficult for me to describe my feelings. How many terrible things were we forced to endure in these past years, and now all of this is behind us!”

As one of the main battlegrounds of World War II, Ukraine had suffered a tremendous amount of physical and emotional destruction. Most of its cities and much of its industry were reduced to ruins. There were also huge population losses – it is estimated that between 6 and 9 million Ukrainians died in the war. Roughly 1.5 million Ukrainian Jews were killed in the Holocaust, while around 2.4 million forced laborers, especially young women, had been deported to the German Reich.

Research into the crimes of the German occupiers in Ukraine – including the mass murder of Ukrainian Jews and Roma, the killing of the sick and disabled and the inhumane treatment of Soviet prisoners of war in the camps in Nazi-occupied Ukraine – is still in its infancy yet is currently the subject of a research project at Heidelberg University. The population loss in Ukraine was all the more dramatic as the country had already suffered 4 million fatalities under Stalin in the great famine of 1932–1933, a catastrophe caused by the willful mismanagement of Soviet leadership.

To this day, Ukraine’s share of the victims of World War II and the German occupation and extermination policies continue to attract scant acknowledgment in the European culture of remembrance. For this reason, any plans to erect a memorial in Berlin to the victims of the Polish occupation should therefore also include victims in Ukraine and other Eastern European countries.

The end of World War II also brought an expansion of Ukraine’s territory in accordance with the Soviet annexation of eastern Poland, which had been agreed upon in the Hitler-Stalin Pact of 1939. At the Allied conference in Yalta in February 1945, the Curzon Line was set as the binding western border of the Soviet Union. From that point on, all Ukrainians lived in a common state, the Ukrainian Soviet Socialist Republic.

However, the political and economic integration of western Ukraine presented immense challenges to Soviet post-war politics. In the early post-war years, Soviet authorities –particularly the secret services – focused their attention on smashing Ukrainian national forces, which had temporarily collaborated with the Nazis during the war. This tied up many Soviet resources. After the war, members of the Ukrainian Insurgent Army (UPA) continued their activities in western Ukraine, carrying out acts of sabotage and attacks on representatives of the Soviet state while often enjoying strong public support for their efforts.

This guerrilla warfare in western Ukraine continued until the mid-1950s. After 1945, the UPA waged a parallel war against Polish authorities in the areas of eastern Poland.

Late Stalinism in Ukraine was generally characterized by a new version of the fight against Ukrainian nationalism. It was accompanied by repressive policies against Ukrainian intellectuals and an intensified policy of Russification. In other words, the Soviet leadership responded to its post-war problems by using pre-war repressive measures in an attempt to wrest control of the population by means of old, tried and tested techniques, including purges, repression and mobilization propaganda.

By 1953, more than 320,000 Soviet citizens had been arrested by the Soviet secret service for being suspected Nazi collaborators, including 93,590 individuals in Ukraine. Most of those arrested were sentenced to prison terms and forced labor lasting between 10 and 25 years. Some were even sentenced to death, including some former forced laborers and members of the police force that had murdered on behalf of the Germans. They also comprised women who had been deported to the Reich to perform such tasks as cleaning and cooking for the Germans.

Mikhail Usyk’s fearful anticipation proved to be prescient. In post-war Ukraine, it wasn’t just the former active supporters of the Germans who were suspected of treason, but everyone who had lived under German rule. After the war, several million inhabitants of the occupied territories had a note to this effect inserted into their identity cards, which restricted their career opportunities and often led to other forms of discrimination and stigmatization.

All the while, the Soviet leadership was repeatedly forced to make pragmatic concessions to urgently needed skilled workers, who were essential in tackling the massive challenge of economic reconstruction. New groups of forced laborers – including repatriated Ostarbeiter and Soviet prisoners of war as well as German prisoners of war and ethnic German civilians who had been deported to the Soviet Union from Eastern and Southeastern Europe – were used in large numbers in this reconstruction. In October 1945, in some factories in the central coal basin of Donbass, 80 percent of the workforce was made up of members of this unpaid, involuntary labor force.

Large-scale ethnic purges also shaped the initial post-war years in all of East-Central Europe. Roughly 800,000 Poles were deported west, mostly from Ukraine, and more than 500,000 Ukrainians were relocated from Poland to Ukraine by the Soviet NKVD, often by the use of massive force. In spring 1947, roughly 150,000 Ukrainians who had resisted resettlement were forcibly relocated within Poland from the southeast to the north and west of the country as part of Operation Vistula. This undertaking was designed to assimilate the Ukrainians to Polish culture.

Polish troops were almost exclusively responsible for carrying out Operation Vistula, but it was undoubtedly coordinated with Moscow and sought in particular to weaken the Ukrainian resistance. Moreover, roughly 200,000 western Ukrainians were deported within the Soviet Union to the Siberian Gulag. All the while, the post-war governments of the Soviet Union and Poland coordinated their ethnic purges between themselves and worked to remove the minorities from their territory on both sides of the Polish-Soviet border.

Due to the fact that millions of Jews and Poles had fallen victim to the Nazi extermination policy during the war and that many Ukrainian Germans had emigrated, Russians now represented the largest minority in Ukraine. After 1945, tens of thousands of Russians emigrated to western Ukraine as skilled workers and laborers. It stands as yet another tragedy suffered by Ukraine that as a result of both wartime and post-war purges, the country lost the multi-ethnic character it had developed over centuries.

For Poles and Ukrainians, this mutual history of ethnic cleansing presents a difficult legacy. Violent Ukrainian-Polish conflicts had already taken place in the war years. For example, starting 1943, the UPA had carried out acts of terrorism against Polish settlers in Volhynia and Galicia, which killed around 100,000 Poles, including many women and children. In return, the Polish home army – Armia Krajowa – murdered about 20,000 Ukrainians.

The Ukrainian decommunization or “memory” laws passed in 2015, which stipulate that members of the UPA and the Organization of Ukrainian Nationalists (OUN) must be fully honored as “fighters for Ukrainian independence,” have met with massive protests in Poland. Some Polish historians believe that the murder of Polish civilians carried out by Ukrainian nationalists qualifies as genocide. In 2018, amendments to Polish laws specified that the investigation of crimes carried out by Ukrainian nationalists against Polish citizens would be a central focus of official Polish history policy and research in the future. The political relationship between Ukraine and Poland, which had been somewhat reconciled since the 1990s, is now increasingly burdened by these historical-political controversies.

Competing interpretations of the history of World War II now also provide potentially explosive content for the already difficult relationship between Ukraine and Russia. After the Euromaidan protests, the annexation of Crimea and the beginning of the war in Donbass, both sides have begun using distorted views of the history of World War II as weapons in their political conflict as well as a means to mobilize their own populations. There is ample evidence that the difficult legacy of World War II will continue to pose major challenges for societies in the successor states of the Soviet Union.

Tanja Penter
is a German historian and professor of Eastern European history at Heidelberg University. 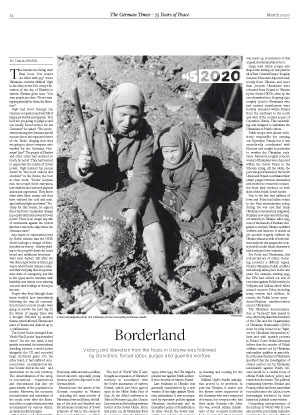